The head of a white supremacist group, cited by the suspected gunman who killed nine people at a black South Carolina church last week, has given thousands of dollars to several 2016 Republican presidential candidates, according to media reports.

Earl Holt III of Texas, leader of the Council of Conservative Citizens, has donated a total of $65,000 to Texas Senator Ted Cruz, former Pennsylvania Senator Rick Santorum and Kentucky Senator Rand Paul, among other politicians in recent years, the Guardian reported late on Sunday.

The New York Times also reported the donations on Monday.

According to the Guardian, Holt also donated to campaigns for other Republican lawmakers, including U.S. Representative Steve King of Iowa, Senator Tom Cotton of Arkansas and Senator Jeff Flake of Arizona. He has donated to former Minnesota congresswoman and presidential candidate Michele Bachmann of Minnesota, it said.

Representatives for Cruz told the papers that his campaign would immediately return the $8,500 given by Holt.

Representatives for Paul did not respond to the newspapers' request for comment, while a Santorum spokesman told the Guardian the candidate does not condone racism but did not address the donated funds.

According to the media reports, records show Holt, 62, lists himself as president of the group, which the suspect in the South Carolina shooting, 21-year-old Dylann Roof, who is white, reportedly cites in a racist manifesto he appears to have written and that surfaced over the weekend.

Reuters could not immediately confirm who created the website with the manifesto or the authenticity of the photographs posted on it. The FBI has said it is investigating the website.

In a statement on Sunday, Holt said he was not surprised that his group helped inform Roof but that it was "hardly responsible for the actions of this deranged individual," according to the newspapers. The group, on its website, has said it was saddened by the South Carolina shootings.

The Missouri-based Council of Conservative Citizens advocates "whites rights" and believes "the United States is a European country and that Americans are part of the European people." It opposes integration and so-called race-mixing and calls for the halt of immigration, according to its website.

The organization has been cited by the Southern Poverty Law Center as an extremist group that has called blacks "a retrograde species of humanity."

S.C. Killer Dylann Roof’s Segregation Inspiration: The Council of Conservative Citizens and the Politicians Who Pander to Them 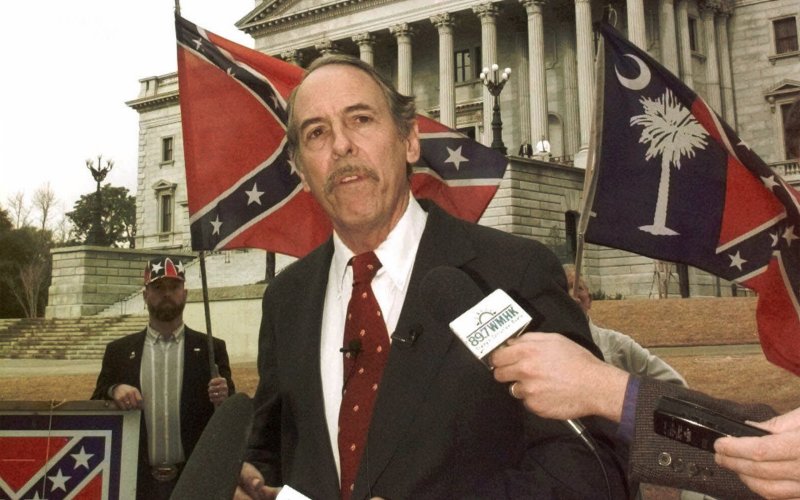 When Dylann Roof discovered the Council of Conservative Citizens and was radicalized, he was tapping into a deep history of Southern racism.

In his own words, Dylann Roof’s path from a child “not raised in a racist home or environment” to the 21-year-old white supremacist who shot and killed nine men and women in a historic black church in Charleston last Wednesday evening began with the discovery of a website.After the murder of Trayvon Martin, an unarmed black teenager, in 2012, Roof claimed he was “awakened.” In the manifesto he published to his personal website, LastRhodesian.com, Roof wrote that Martin’s murder prompted him to search for “black on White crime [sic],” on Google, which led him to the Council of Conservative Citizens.“I have never been the same since that day,” Roof wrote.This innocuous-sounding organization has a dark lineage, descending from the White Citizens Councils that sprang up throughout the deep South as part of the “massive resistance” to desegregation, spurred by the Supreme Court’s Brown v. Board of Education decision in 1954. Cloaking their racism in community concern afforded the White Citizens’ Council a veneer of respectability that attracted the support of local elected leaders. Popular culture has primarily remembered the group for what might be called concern-trolling: in the 2011 movie “The Help,” they endorse the construction of separate bathrooms for African-Americans as a means to stop the spread of disease. In reality, however, their objective was to ensure the continued economic and political disenfranchisement of black citizens through intimidation campaigns.In 1963, the Clarion Ledger explained that Mississippi’s Jackson Citizens Council had decided to confront a tide of white churches welcoming black parishioners with “a positive plan of action to save these churches from integration.” That same year, White Citizen Council member Byron De La Beck assassinated civil rights leader and WWII veteran Medgar Evers.By the late 1970s, the White Citizens’ Council descended into irrelevance as the country fitfully implemented desegregation, and in 1985, the Council of Conservative Citizens rose on out of the White Citizens Council’s ashes. The new name was more marketable, but their agenda was no less extreme.A statement of principles on their website as of 2007 stated they “oppose all efforts to mix the races of mankind, to promote non-white races over the European-American people through so-called ‘affirmative action’ and similar measures, to destroy or denigrate the European-American heritage, including the heritage of the Southern people, and to force the integration of the races.”

An article published this January claimed 361 black on white murders had taken place in the previous year.

“I was in disbelief,” Roof wrote of what he found on the Council’s website. “There were pages upon pages of these brutal black on White murders [sic].”

“The people in this room stand for the right principles and the right philosophy.”

Roof’s radicalization is a reminder that evil rarely incubates in a vacuum.  But digging even an inch deep into the Council of Conservative Citizens’ mission has historically proven too difficult for politicians blinded in their determined to court the southern conservative vote.

Former Mississippi Senator and GOP Majority leader Trent Lott addressed the organization at their 1992 convention in Greenwood, Miss., and was quoted in their newsletter as saying “The people in this room stand for the right principles and the right philosophy.” Lott attempted to distance himself from the organization but notably refused to support a measurecondemning the Council of Conservative Citizens for espousing “racism and bigotry.”

The following year, then-Arkansas Lt. Governor Mike Huckabee delivered a videotaped keynote speech to their convention. He promised to return in the flesh the following year, according to the Council’s founder Gordon Lee Baum, but when Huckabee learned that another speaker was a notorious white supremacist, and the Arkansas media began to cover the matter, he declined the invitation, saying, “I will not share the stage … with someone who thinks the Holocaust didn’t happen.”

In June 1998, Congressman Bob Barr, a Republican from Georgia, served as their keynote speaker at an event in Charleston. By December, Barr’s connection to the group was publicized by Professor Alan Dershowitz during the Clinton impeachment hearings. Barr denied any knowledge of their racist objectives, and calling all claims to the contrary “unfounded and deplorable.”

In 2009, conservative author and activist Ann Coulter devoted several pages in her book “Guilty” to dismissing accusations that the Council was a racist organization. “Apart from some aggressive reporting on black-on-white crimes—the very crimes that are aggressively hidden by the establishment media—there is little on the CCC website suggesting” a racist agenda, Coulter wrote. She argued that the accusations of racism endured just “because some of the directors of the CCC had, decades earlier, been leaders of a segregationist group.”

In a 2010 interview with The Weekly Standard, Mississippi governor Haley Barbour offered a defense of the White Citizens’ Council: “You heard of Citizens Councils?” he asked. “Up north they think it was like the KKK. Where I come from it was an organization of town leaders. In Yazoo City they passed a resolution that said anybody who started a chapter of the Klan would get their ass run out of town. If you had a job, you’d lose it. If you had a store, they’d see nobody shopped there. We didn’t have a problem with the Klan in Yazoo City.”

In 2013, South Carolina Governor Nikki Haley appointed Roan Garcia Quintana, a member of the Council, to her campaign committee. When the Southern Poverty Law Center publicized Quintana’s ties to the organization, Haley came under firefrom prominent Democrats. Haley pushed Quintana to resign, and her campaign claimed they were “previously unaware” of his background.

The organization rallied in defense of keeping the flag raised there in 1994. The keynote speaker at the rally in Hilton Head, S.C., was the president of the South Carolina state chapter of the Council of Conservative Citizens, William Carter, who had previously served as state campaign manager for Louisiana Klansman David Duke’s presidential campaign.

They got their wish.

When flags throughout South Carolina flew at half-mast in the wake of Wednesday’s massacre, the Confederate flag behind the state capitol was not lowered because, locked in place with a padlock, it lacks the mechanics—the actual pulley-system—to do so, and even the governor claims that her hands are tied on the matter, and removing the flag is up to the legislature.

But just as Roof’s evil did not incubate in a vacuum, neither does courage. State Representative Norman “Doug” Brannon has pledged to introduce legislation to remove the flag. And governor Nikki Haley and Senator Tim Scott, both minorities, must join him.

After decades of exploiting divisive dog whistles for political gain, now is the time for Southern politicians to confront the symbols of slavery and white supremacy without equivocation.