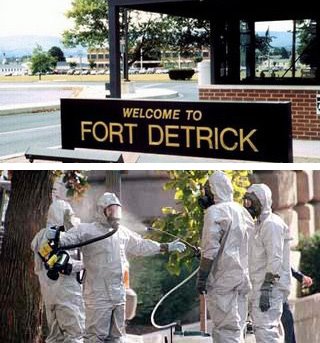 Many people have long suspected a connection between illnesses, including cancer, and living near Fort Detrick in the past. More specifically, they cite a large parcel known as Area B, in which a range of chemicals was tested, dumped or otherwise disposed of.

For years, drinking water from private wells near the base had been the prime suspect. Some of these wells were contaminated with TCE and PCE, carcinogenic chemicals that in 1992 were discovered to have leaked into the groundwater that supplied them.

More recently, however, another focus has emerged in addition to the chemicals found in local well water — Agent Orange. It’s clear at this point that Agent Orange was tested at Detrick over a long period of time — between 1946 and 1963.

Because of new revelations — and allegations — Fort Detrick and the Defense Department are searching decades-old records in an attempt to determine when, how and how much Agent Orange was used at Fort Detrick.

The Defense Department and Department of Veterans Affairs have been dealing with the fallout from widespread use of Agent Orange since the Vietnam War. An effective defoliant, it was used to destroy vegetation the Viet Cong used to cover their presence and movement.

At this point, reams of pages must exist on the use of Agent Orange and its effects on those who came in contact with it.

Thousands of Vietnam veterans who were exposed to it one way or another have become ill from that experience. Some have died. Many types of illnesses resulting from exposure to Agent Orange have been documented, including disorders of the skin, nervous system, Type 2 diabetes and a number of cancers.

Defense and VA officials have surely assembled a compendium of epidemiological records over recent decades that corroborate the connection between exposure to Agent Orange and illness. These findings should be applied to the people who lived near the fort and suffered illnesses, including cancer, to determine if there is evidence that they were caused by exposure to Agent Orange.

Area B has been the subject of a long-term, expensive remediation effort that was just recently completed. It may no longer pose a threat, but for many years it was a toxic wasteland. If Agent Orange is associated with some of the deaths and illnesses of Fort Detrick’s civilian neighbors, for them, this cleanup will have come too late.

Did Agent Orange used at Detrick make some of those living nearby sick, some unto death? The bare truth is called for here. Nothing less will do — whatever that truth is and whatever its consequences.