The U.S. Military Tested Agent Orange at a Base in Gagetown, New Brunswick (CBC) 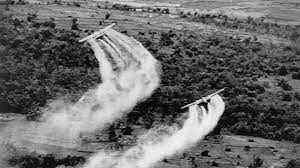 Canadian Broadcasting Service (CBC): "The Langille family always suspected that Bernie Langille was killed because he discovered the operation."

Ottawa always denied that Canada was assisting the U.S. in testing chemical warfare agents for Vietnam in 1966 and 1967.

Residents, many of who worked for the military, vividly remember the trucks that sprayed foam bubbles up and down the streets. "We would run through it as children," remembers Ernie Caisee who was a child when the spraying took place, "when you came out of that cloud there was a film all over you. And I remember my mother saying 'Get into the tub now.'"

The military never gave the public any warning about the chemical testing and residents continued to fish in the river and eat locally grown food. "Some of my best friends were buried before 60," says Caisee who believes that incidences of serious illness were connected to the toxins.

The truth was finally revealed in the 1980s when a group of New Brunswick power employees fought for compensation.

Bernie Langille's grandfather was a mechanic who lived in the area and died under mysterious circumstances in 1968. His family always believed that he was a witness to the illegal spraying and that his knowledge played a role in his death. In Bernie Langille Wants to Know What Happened to Bernie Langille a grandson goes on a quest to discover what happened.