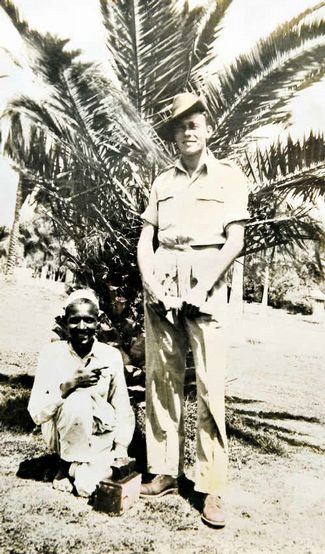 A WORLD War II veteran who has spent most of his life in Bundaberg has told for the first time how he was part of a dash across a devastated Europe to snare a top German rocket scientist before the Russians could get to him.

That scientist, Wernher von Braun, later went on to design ballistic missiles for the US Army before moving his team to NASA, where he designed the rockets that took Americans into space.

But if the Russians had got to him first, von Braun, his team and all their combined expertise would have disappeared behind the Iron Curtain, giving the Soviets a possibly unbeatable lead in the race into space.

Jim Earnshaw, who had taken part in the D-Day landings in Normandy, was in his early 20s and a signals operator with Combined Operations when he was chosen as the radio man with the army unit given the task of dashing to von Braun's headquarters at Peenemunde.

But before the team had started on their mission, they were assembled below decks on the landing ship taking them across the Channel and sworn to secrecy for 50 years.

Before the team set out across Europe, they were told they were answerable only to British Prime Minister Winston Churchill, waiting in his bunker in London for word of their success.

During the days the team spent driving across war-ravaged Europe to Peenemunde, Mr Earnshaw and his comrades had to get past one stubborn German sniper.

At another spot, he and a Royal Marine took the surrenders of eight German soldiers who had decided the war was over.

When Mr Earnshaw and the team arrived at Peenemunde the gates were closed and the German soldier on guard had to let them in, explaining that since the war was still officially on, they had to consider themselves his prisoners.

“Not a shot had been fired, the place was deserted,” Mr Earnshaw said.

After a trip to the docks Mr Earnshaw said he returned to the rocket teams headquarters and saw the team had successfully located the object of their mission, Wernher von Braun.

“Outside the entrance our Lieutenant-Commander was talking to two German civilians,” he said.

“I was told the bigger man of the two was Wernher von Braun.”

Mr Earnshaw said he was struck by the incongruity of the target of their mission standing there having a chat.

“It seemed ridiculous. We were fighting a war and these chaps were congregated there like they were having a cup of tea,” he said. “I would love to know what those three were discussing. They would probably have been talking about ways and means of getting him out.”

Mr Earnshaw's British Army unit that captured von Braun managed to get him away and he was handed over to the Americans.

Mr Earnshaw returned to England for some rest, and later was sent to Palestine, where he was stationed during hostilities between the Jews and Palestinians.

“We were there to keep the Jews out,” he said.

He later moved to Bundaberg, where he worked in the cane industry.