"... it's an interesting thing that very few people know that the U.S. space program actually owes itself to a practicing Satanist. ... Wernher Von Braun, who's usually credited with inventing the U.S. space program, said it wasn't him, it was this guy Jack Parsons that nobody has ever heard of. ..."

Excerpt: "Stories of the Dead and Famous, and Just The Dead" 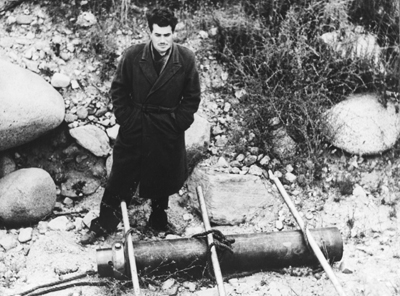 HANSEN: I'm speaking with John Michinson and John Lloyd, authors of "The Book of the Dead: Lives of the Justly Famous and the Undeservedly Obscure."

One more, included in the chapter "Once You're Dead You're Made for Life," Jack Parsons who was considered the maverick pioneer of American rocket technology. He lived from 1914 to 1952. And, you know, if you want to talk about skeletons in the closet, you write - he first invoked Satan when he was 13?

Mr. LLOYD: Yeah. Jack Parsons who was born in 1914 and he died very young, only in 1952 he died. And he was a kind of crazy guy at school and the way he used to have fun was blowing things up. Fireworks was his big thing and science fiction. And he had a friend called Edward Foreman(ph), and they were sort of kids who were trouble at school all the time. And they got into spells and incantations, as well as explosions.

And they dropped out of high school and they joined a company called the Hercules Powder Company, which was an armaments manufacturer in California. And from that Jack became a kind of nationally famous rocket expert, and he went to CalTech. And by the end of World War II, this had become the Jet Propulsion Laboratory. And Wernher Von Braun, who's usually credited with inventing the U.S. space program, said it wasn't him, it was this guy Jack Parsons that nobody has ever heard of.

He was the guy, Jack, who created the solid fuels that we used in the Apollo space missions and stuff thats used in the propulsion Polaris nuclear missiles. And before every experiment, what this guy would do, dress up in his robes and invoke the spirit of Pan, the horned pagan god of fertility.

Mr. MICHINSON: So it's like a lot of people in the book. He's a kind of paradox. In one sense, he's a complete genius. In the other sense, a sort of total flake cause one of the things he got involved in was an organization called the Order Templi Orientis, which is a strange kind of Satanic organization led by Aleister Crowley, the great magician known as The Beast.

And one of the people that Jack Parsons got involved with was L. Ron Hubbard, would you believe, before he started Scientology. They both believed in UFOs, you know? One day while Parsons out in the desert, thinking he was meeting Venusians, Ron Hubbard ran off with all of his money and his girlfriend.

Mr. MICHINSON: So it's an interesting thing that very few people know that the U.S. space program actually owes itself to a practicing Satanist.

Mr. MICHINSON: And he's got a crater on the Moon named after him. And get this, it's on the dark side.

HANSEN: Oh, one hates to think of the Faustian bargain he may have made for his soul, if he had one.