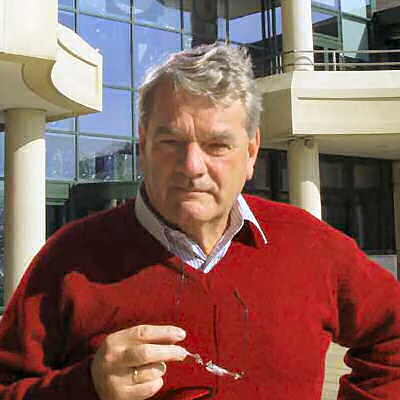 LONDON – A Polish organization began legal action this week to convict British Holocaust denier David Irving for “minimizing” the scale of Nazi atrocities, as the revisionist historian begins his controversial tours of the Nazi death camps in the country.

The Open Republic Association Against Anti-Semitism and Xenophobia lodged a complaint with the Institute of National Remembrance- Commission for the Prosecution of Crimes against the Polish Nation (IPN) on Wednesday claiming Irving seeks to “minimize” the scale of Nazi crimes as well as deny the extermination program in his book Hitler’s War, which was recently published in Polish.

The legal action comes as Irving, who was jailed in Austria in 2006 for Holocaust denial, embarks on a weeklong tour to concentration camps and the former site of the Warsaw Ghetto.

“Let’s not wait for the moment when David Irving commits a new crime in Poland; the evidence indicates clearly that he has already committed this crime,” Open Republic said in its complaint to IPN, which prosecutes both Nazi and Communist era crimes against the Polish people.

The group was set up in 1999 in response to the manifestations of xenophobic tendencies in Polish public life and the revival of anti-Semitism and racism, its remit states.

Dariusz Gabrel, from Open Republic, described Irving as one of the “foremost Holocaust deniers” and called for his prosecution under Polish laws that prohibit the denial of Nazi crimes.

“Material evidence clearly shows that he has broken the law,” he said. “Poland, the country in which the Nazis committed their crimes against humanity, should be especially sensitive to Irving’s kind of crime.”

Irving arrived in Poland on Tuesday to lead his much criticized tour of Nazi sites, which is expected to attract a number of far-right sympathizers from across Europe who will pay $2,650 each.

Advertising material for the tour promises an experience far removed from the “tourist attractions of Auschwitz.”

However, the museum at Auschwitz has banned Irving from giving a guided tour there.

A spokesman for the Auschwitz-Birkenau Museum said Irving can visit as an individual but that he would be “closely monitored.” Last week, the convicted Holocaust denier claimed that Treblinka was a real death camp site, as opposed to Auschwitz, which he described as a “Disney- style tourist attraction.”

Speaking to the Daily Telegraph on Wednesday he said, “I am baffled by the reaction I’ve had in Poland because they should be very grateful that I am here.

“Here I am lecturing to the revisionists and setting the record straight. I am saying to them – those who believe that not a hair was harmed on the head of the Jewish community – that you couldn’t be more wrong.”

He described people who branded him a Holocaust denier as “criminal, lying lunatics.”

Deborah Lipstadt for libel, after she called him a Holocaust denier in her book Denying the Holocaust.

Three courts subsequently found in favor of Lipstadt concluding that Irving was a Holocaust denier, an anti- Semite and a racist.