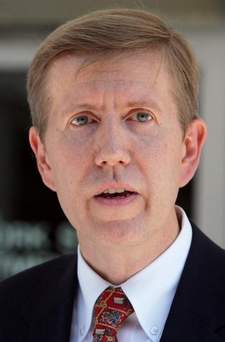 In 2007, a Village Voice reporter went undercover to a gathering of white supremacists and was surprised to see a Westchester congressional candidate show up to pass out literature.

"I just remember him being this smiling kind of Mr. Rogers guy, walking around while people were eating, and handing out his fliers," said Maria Luisa Tucker, who attended the Memorial Day weekend event at a meeting hall in Elmwood Park, N.J. The materials began, "Just how many illegal immigrants

and family members are we talking about — and at what cost?"

The candidate, Jim Russell, was mentioned by name in the article published in June of that year.

In April 2006, a British magazine article described a Virginia conference of the white nationalist New Century Foundation, and noted "the Occidental Quarterly stall run by James Russell, a member of its editorial board."

Only this week did Russell's association with such organizations gain widespread attention and interfere with his political ambitions. On Monday, the Politico website highlighted Russell's 2001 essay in the quarterly, another white nationalist organization. Republicans immediately dropped support for his candidacy, having endorsed him in 2008 and again this year as a challenger to Rep. Nita Lowey, D-Harrison.

His essay discusses "sociobiological" theories against race mixing, and includes anti-Jewish comments and references. He quotes Ezra Pound, for example, on how "reasons of race and culture combine to make any large number of free-thinking Jews undesirable."

in a list of eight editorial advisory board members. It is not included in that list on the journal's website. On both the Facebook page and the website, quarterly editor Kevin MacDonald calls for a defense of "the legitimate interests of Whites in maintaining their cultural and political control."

Russell's campaign manager, Frank Morganthaler, declined to comment on the latest revelations and questioned why his candidate was receiving so much scrutiny. Russell did not return calls for comment Friday.

The 56-year-old Hawthorne resident is running for Congress for a fifth time, and has the Conservative line. He is a case manager at the New York State Insurance Fund and a longtime activist for immigration enforcement.

Russell received a doctorate in theology from Fordham University in 1990 and taught the subject for a year and a half at St. Peter's College in New Jersey. He attended the U.S. Military Academy at West Point in 1971 as part of the class of '75 but did not graduate. It's not clear how long he was at the academy. His campaign site doesn't mention West Point, but "in veteran circles, he's talked about it quite a bit," Morganthaler said.

Russell's name and his two religion-themed books are cited on numerous racist and anti-immigrant websites. He is identified by name in a photo on the American Renaissance website captioned, "at the 2002 AR conference."