" ... A grand total of 1,352 Germans and Austrians flowed through the Paperclip pipeline between 1945 and 1960. Their shady and often shocking pasts were carefully concealed behind the all too familiar curtain of 'national security.' ... "

By Oct. 12, 1945, roughly a month after the president approved the top-secret Project Paperclip, the United States Army started smuggling a very different kind of illegal alien across the Mexican border into El Paso. Meanwhile, many thousands of Lone Star soldiers, sailors and marines waited in Europe and the Pacific for their turn to come home. How would these weary warriors have felt had they known the brains behind the Third Reich’s war machine were beating them back to Texas?

Before the Nazis called it quits in April 1945, the continent they once conquered was the scene of a wild calf scramble. Americans, British, French and Russians were turning Europe upside down in a frantic search for the cream of Germany’s scientific crop.

Secretary of State Dean Acheson and other close advisors waited until the atom bomb brought the Japanese to their knees before raising the sensitive subject with Harry Truman. The distasteful idea did not appeal to the down-to-earth president, who had moral as well as political qualms about putting Hitler’s lab rats on the government payroll. 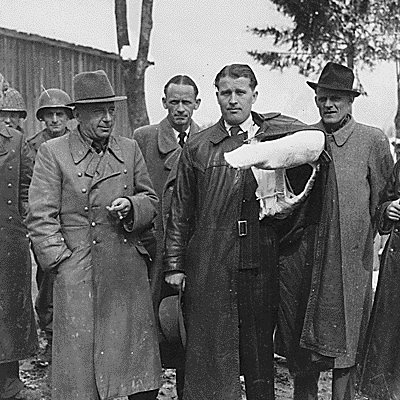 But Acheson had an answer for every objection. Even though the scientists would enter the country without visas, the War Department would provide the appropriate federal agencies with the necessary information to make them legal immigrants. The Army would have custody of the controversial guests and keep them out sight so as not to offend the public’s patriotic sensibilities.

Truman eventually agreed but only after inserting the following clause in the Paperclip memorandum: “No person found … to have been a member of the Nazi party and more than a nominal participant in its activities or an active supporter of Nazism or militarism shall be brought to the U.S.”

The man from Missouri should have known better. The Army ignored his key condition, fed the departments of State and Justice a steady diet of lies, made a mockery of U.S. immigration law and welcomed with open arms suspected war criminals that belonged in the dock at Nuremberg.

A hundred or so German scientists, with a sprinkling of Austrians, wound up at Fort Bliss outside El Paso. Most had worked at the Peenemunde Aerodynamics Institute testing guided missiles in high-speed wind tunnels, or at Mittelwerk, the underground V-2 rocket factory where concentration camp inmates were starved, beaten and worked to death. At the end of the war, American troops found 6,000 bodies inside the Mittelwerk cave.

Here are some of Germans whose mail was forwarded to Fort Bliss:

Wernher von Braun, the boy wonder of rocket science, was there along with his lesser known brother Magnus. Despite his supposedly squeaky clean credentials, Wernher joined the SS at the personal invitation of Heinrich Himmler and rose to the rank of major.  An Army Counter Intelligence Corps agent called Magnus “a dangerous German Nazi” adding, “His type is a worse threat to security than a half dozen discredited SS generals.”

Arthur Rudolph was the former head of production at Mittelwerk and future project director of the Saturn V rocket program. An officer, who interrogated him upon his arrival in America, wrote, “100% Nazi, dangerous type, security threat, suggest internment!”

Herbert Axster was a lieutenant colonel in the Wehrmacht before becoming chief of staff for the Peenemunde director. His wife Ilse, who came with him to Texas, was not so fondly remembered by relatives and acquaintances as a “Nazi tyrant,” who amused herself by horsewhipping Polish workers.

V-2 flight test director Kurt Debus belonged to a long list of Nazi organizations including the SS and SA. In 1942 he turned a fellow scientist over to the Gestapo for anti-Hitler remarks. In his defense a security official argued, “Any conscientious and patriotic, though short-sighted person might have done the same.” Debus went on to be the first director of the Kennedy Space Center.

Georg Rickhey was one of the few boys at Bliss returned to Germany to stand trial. Although the Mittelwerk general manager beat the rap, the Army classified the entire trial transcript to hide the fact that Wernher von Braun and Arthur Rudolph were frequent visitors to the hellhole where so many slave laborers died.

The head of the Luftwaffe Institute for Aviation Medicine set up shop at Randolph Field in San Antonio. Hubertus Strughold and his staff conducted incredibly cruel experiments on human guinea pigs forcing them to drink seawater and deliberately infecting them with malaria and typhoid. Within two years, he was put in charge of the new Department of Space Medicine.

A grand total of 1,352 Germans and Austrians flowed through the Paperclip pipeline between 1945 and 1960. Their shady and often shocking pasts were carefully concealed behind the all too familiar curtain of “national security.” By the time the truth began to come out, most Americans were too busy cheering for “our” German rocket scientists against the Russians’ to give a hoot.