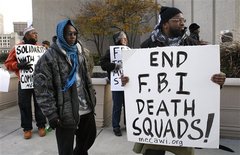 WASHINGTON - Nearly half a century after the height of the civil rights movement, hundreds of thousands of pages of government files about the volatile era remain shielded from the American public, buried in FBI field office cabinets, blocked by resistant bureaucracies, or available only with large sections blacked out, according to US officials and researchers.

The situation has prompted a new push in Congress, led by Senator John F. Kerry of Massachusetts, to require that all records relating to the life and death of Rev. Martin Luther King Jr. be located, reviewed, and released by a review board at the National Archives similar to those established for the assassination of President John F. Kennedy and for Nazi war criminals.

Kerry’s plan to introduce legislation this week, however, is seen as only the first step in a broader movement to force the government to disclose what it knows - and did - about violence against blacks during the civil rights era, including scores of unsolved lynching and bombing cases.

“There are a lot of unanswered questions,’’ said Representative John Lewis, a Georgia Democrat and former King aide who was brutally beaten during a civil rights march in 1965. “The American people have a right to know what happened.’’

The often frustrating task of persuading the Federal Bureau of Investigations to open all its records from that period has been undertaken primarily by loosely organized relatives of victims, lawyers, journalists, and part-time writers such as Stuart Wexler, a New Jersey social studies teacher.

Wexler, 33, was recently researching a book about plots to murder King when he learned the FBI’s archives contained a document about a Ku Klux Klan leader who claimed to have played a role in the civil rights leader’s assassination in 1968. When Wexler filed a request for a copy, he was informed that it had been destroyed as part of regular house cleaning. He then learned there had been a government clerical error and the file was not lost to history.

Still, Wexler will have to submit another formal request, this time with the right file number, and is unsure what he will receive, or when he will receive it.

Others also believe the FBI is holding on to a variety of records that may contain valuable information, including leads the FBI may not have followed about a rash of racial killings in the South from the 1940s to the 1960s.

The recently established Civil Rights Cold Case Project - made up of family members, journalists, and civil rights lawyers - hopes to find more answers. It recently sought support from Attorney General Eric H. Holder, who responded in writing that the Justice Department “is engaged in internal discussions about how best to proceed . . . in order to achieve the most responsible public disclosure possible.’’

According to the National Archives, the FBI maintains one of the largest backlogs of requests, such as Wexler’s, that have been filed under the Freedom of Information Act, a law designed to provide public access to broad categories of information. In a statement, FBI spokesman Paul E. Bresson said “requests are routinely completed pursuant to the laws that govern the process’’ and said the bureau is “not aware of the concerns’’ about King and other records.

Part of the problem, many researchers say, is that unless they know which specific documents to request there is little chance of success, and as a result there needs to be an alternate mechanism along the lines of what Kerry is advocating for King files.

They insist that what the government knew at the time about widespread racial violence could be crucial in solving some murders, such as the brutal killing of Clifton Walker, a father of five who was shot in the face on his way home from work in Woodville, Miss., in 1964.

“The FBI documents I have [on the case] are highly redacted. I stare at them every day,’’ said Ben Greenberg, 40, a freelance journalist in Somerville who is working with the Cold Case Project. “If I knew whose name was under there or could better piece together what circumstances are being described, I’d be further down the path.’’

He thinks government files about a rash of racially motivated killings at the time in southwest Mississippi might contain information that could help solve multiple cases.

“If these files were more broadly available and not redacted they could provide a road map,’’ said Greenberg, whose father, Paul, worked for King in the early 1960s.

Opening up all the files on King is seen by Kerry and others as a good start.

For example, thousands of pages on King that were shipped to the National Archives by the FBI have languished for years without being processed for public viewing.

“This hidden collection problem is huge,’’ said David Ferriero, the archivist of the United States.

Other MLK-related records have been sealed, including those reviewed by a special House committee in the late 1970s that concluded the assassin who shot King at the Lorraine Motel in Memphis, James Earl Ray, did not work alone. Those records are not set to be released for nearly two more decades, according to the National Archives.

“I want it all out. I wanted it all out back then,’’ said G. Robert Blakey, a professor at Notre Dame Law School who served as the staff director of the House Select Committee on Assassinations.

Other researchers believe the FBI has never acknowledged the full extent of its investigation into King’s murder or made public all of its massive “MURKIN’’ file, which stands for the "murder of King."

Waldron, Wexler, and others believe records related to King could shed light on other civil rights killings. “We can cross-reference their files in a way they never could back then,’’ Wexler said.

There is also the notorious record of FBI spying on King’s private activities, a history that also remains mostly secret.

“I hope I am not biased, but I believe there was a deliberate, systematic effort on the part of [FBI Director] J. Edgar Hoover to destroy Martin Luther King, Jr.,’’ said Lewis, who is expected to cosponsor Kerry’s bill in the House.

While some are concerned that the private revelations could embarrass King’s family or tarnish his legacy, Lewis and Kerry believe releasing the records could help prevent future abuses.

“I want his personal history preserved and examined,’’ Kerry said.

The MLK Records Review Board, according to a draft of the Kerry bill, would have jurisdiction over “all records - public and private - related to the life and death of Dr. King, including any investigations or inquiries in federal, state, or local agencies.’’

The board could also request that the attorney general issue subpoenas “to compel testimony or records and require agencies to account for any previous or current destruction of related records.’’

Some researchers worry that some records may have been destroyed because the FBI was not required to keep them, and they might have contained revelations embarrassing to the bureau.

Still, Representative Sheila Jackson Lee, a Texas Democrat who was a staff member on the assassinations committee, said “fresh looks at [available] documents by fresh researchers may be valuable for the FBI.’’ The bureau is not able to reinvestigate these cases because it has too many pressing current missions, she said.

Thomas Moore is among the few family members to see the murder case of a loved one reopened decades after the height of the civil rights movement.

But that was only after a journalist obtained previously unreleased federal and state records about the killing of his brother, Charles.

“It wasn’t until 2005 that I was able to receive the unredacted FBI files,’’ Moore said. And it was not until this month, he added, that he obtained the Mississippi autopsy photos.

As for countless other cases, Moore said he believes “there is still a lot of information out there. It should have been released a long time ago.’’