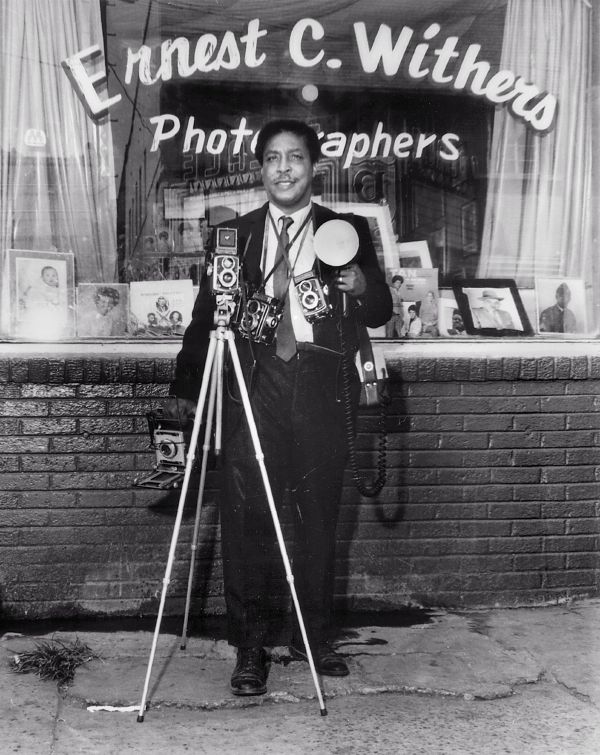 MEMPHIS, Tenn. – A veteran freelancer for America’s black press, Ernest Withers was known as “the original civil rights photographer,” an insider who’d covered it all, from the Emmett Till murder that jump-started the movement in 1955 to the Little Rock school crisis, the integration of Ole Miss, to the 1968 sanitation strike that brought Martin Luther King Jr. to Memphis and his death.

Hours after a sniper shot King on the Lorraine Motel balcony, Withers slipped past a police barricade and walked into room 306 — King’s room. Ralph Abernathy and others hardly blinked. After all, Withers had marched with King and sat in on some of the movement’s strategy meetings.

The grief-stricken aides photographed by Withers on April 4, 1968, had no clue that he was an FBI informant — evidence of how far the agency went to spy on private citizens in Memphis during one of the nation’s most volatile periods.

Withers shadowed King the day before his murder, snapping photos and telling agents about a meeting the civil rights leader had with suspected black militants.

He later divulged details gleaned at King’s funeral in Atlanta, reporting that two Southern Christian Leadership Conference staffers blamed for an earlier Beale Street riot planned to return to Memphis “to resume … support of sanitation strike” — to stir up more trouble, as the FBI saw it.

The April 10, 1968, report, which identifies Withers only by his confidential informant number — ME 338-R — is among numerous reports reviewed by The Commercial Appeal that reveal a covert, previously unknown side of the beloved photographer who died in 2007 at age 85.

Those reports portray Withers as a prolific informant who, from at least 1968 until 1970, passed on tips and photographs about the civil rights and anti-war movements in Memphis.

Records indicate he snapped and handed over photos of St. Patrick Catholic Church priests who supported the city’s striking sanitation workers; he monitored political candidates, jotted down auto tag numbers for agents, and once turned over a picture of an employee of the U.S. Civil Rights Commission said to be “one who will give aid and comfort to the black power groups.”

“It’s something you would expect in the most ruthless, totalitarian regimes,” said D’Army Bailey, a retired Memphis judge and former activist who came under FBI scrutiny in the ’60s. The spying touched a nerve in black America and created mistrust that many still struggle with 40 years later.

“Once that trust is shattered that doesn’t go away,” Bailey said.

In addition to spying on citizens, J. Edgar Hoover’s FBI ran a covert operation, called COINTELPRO, a counterintelligence or “dirty tricks” program that attempted to disrupt radical movements. It did this with tactics such as leaking embarrassing details to the news media, targeting individuals with radical views for prosecution or trying to get them fired. First launched in the 1950s to fight communism, by 1967 it was aimed at civil rights leaders and organizations deemed to be threats to national security. Congressional inquiries later exposed it for widespread abuse of personal and political freedoms, including a fierce campaign against King.

Yet many details of the FBI’s domestic spying, including the inner workings of its informant network in Memphis, remain untold. Tracing Withers’ steps through thousands of pages of federal records reveals substantial new details about the FBI’s surveillance of private citizens.

In Withers, who ran a popular Beale Street photography studio, the FBI found a super-informant, one who, according to an FBI report, proved “most conversant with all key activities in the Negro community.”

“He was the perfect source for them. He could go everywhere with a perfect, obvious professional purpose,” said Pulitzer Prize-winning historian David Garrow, who, along with retired Marquette University professor Athan Theoharis, reviewed The Commercial-Appeal‘s findings.

Many political informants from the civil rights era were unwitting, unpaid dupes. Yet Withers, who was assigned a racial informant number and produced a large volume of confidential reports, fits the profile of a closely supervised, paid informant, experts say.

“It would be shocking to me that he wasn’t paid,” said Theoharis, author of the books “Spying on Americans” and “The Boss: J. Edgar Hoover and the Great American Inquisition.”

The FBI still aggressively guards the secret of Withers’ activities. His informant file remains sealed. The Justice Department has twice rejected The Commercial Appeal’s Freedom of Information requests to copy that file, and won’t even acknowledge it exists.

Instead, the government released 369 pages related to a 1970s public corruption probe that targeted Withers — by then a state employee who was taking payoffs. Censors overlooked a single reference to Withers’ informant number.

That, in turn, unlocked the secret of the photographer’s 1960s political spying when the newspaper located repeated references to the number in other FBI reports released under FOIA 30 years ago. (Read the Commercial Appeal’s complete account at http://www.commercialappeal.com/withers-exposed/).

“This is the first time I’ve heard of this in my life,” said daughter Rosalind Withers, trustee of her father’s photo collection, who said she wants to see documentation before commenting at length.

“My father’s not here to defend himself.”

On April 3, the day before King’s murder, the informant passed on details about a strategy session at the Lorraine between King and Charles Cabbage, founder of the militant Invaders organization. King begrudgingly decided to give the young militants a role in the strike.

The Rev. James M. Lawson came into the FBI’s focus in early 1968. Lawson, then pastor at Centenary Methodist, had invited King to Memphis, where he spoke in support of 1,100 sanitation workers who had walked off the job to protest low pay and horrid working conditions that led to the deaths of two men.

Images Withers shot that night would stand as timeless icons of the strike alongside those he took of marching sanitation workers carrying “I Am A Man” placards and National Guard troops policing Downtown streets.

But earlier that day, Withers met with FBI agents Howell Lowe and William H. Lawrence, who ran the Memphis domestic surveillance program. A report summarizing the meeting indicates informant ME 338-R handed over a newsletter listing names and photographs of community leaders behind the strike.

“I’m not surprised,” Lawson, now 81, said this month when told of Withers’ informant work. Lawson said “the police and FBI were very clever about entrapping” blacks and making them informants.

“Any activity in the black community, Ernie was going to be around,” Lawson said. “It was probably done innocently.”