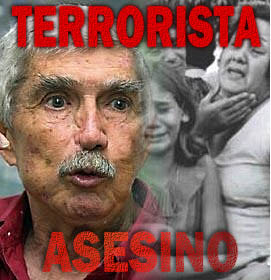 HAVANA, Cuba, Jan 29 (acn) Terrorist Luis Posada Carriles will fly to El Paso, Texas - where he will be tried for lying under oath on March 1 – in an aircraft provided by a drugs and arms dealer linked to the Iran-Contra scandal.

Granma newspaper reported today that Alberto "Al" Pardo Herreros (82), who offered the private jet to carry Carriles, is listed in records related to arms and cocaine trafficking managed by Posada Carriles, who is the self-confessed mastermind of the 1976 mid-air bombing of a Cuban airliner in which 73 people died, known as the Barbados Crime.

The article also notes that under the false name of Ramon Medina, CIA agent Carriles was the chief of logistics of the Salvadorian air force base in Ilopango from where he led trafficking operations to support theNicaraguan Contra at the moment.

Posada Carriles’s lawyers revealed Herreros’s name when they requested Judge Kathleen Cardone to authorize the terrorist to fly in a private jet to El Paso, since he is not allowed to use a commercial flight.

CIA declassified documents show that Herreros was linked to Pedro Luis Diaz Lanz when the latter was dismissed from his post as Head of the Cuban Air Force and later betrayed the Cuban Revolution.

Díaz Lanz joined the CIA and led bombings against Cuban territory from the United States killing several innocent people. Lanz killed himself on June 26, 2008, in Miami with a shot in his chest.