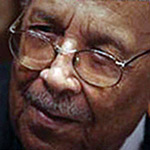 From Rev. Claude Black once said that he was considered (by the FBI?) “rebellious against the establishment and trouble for society.”

San Antonio barber Charles Williams and local minister and aspiring politician Rev. Claude Black were returning home from a meeting at an Eastside gymnasium when they noticed steady headlights trailing them. Rev. Black, who passed away last year, his legacy as a champion of civil rights cemented by decades of struggle for African-Americans in San Antonio, instructed his partner and confidant, “Turn here.”

The headlights followed. “Yeah, I think we’re being followed,” Williams recalled Rev. Black saying. “They kind of stayed back, stayed back, then when we turned and went to my house the car just drove on by,” Williams said last week, relating the event to the Current from the shady balcony of his Eastside eatery and shrine to civil rights, the Landmark Café.

A few days after the scare, someone pulled up in front of Rev. Black’s house at night and fired a shot through his upstair’s window. Williams called it “a warning.”

It was the mid-’60s and Black was making regular attempts at a seat on San Antonio’s City Council. While Williams said Black suspected he was under surveillance, newly released FBI documents confirm the fact. According to more than 800 pages of documents released under the U.S. Freedom of Information Act, Black and others fighting for equality were under regular surveillance by federal agents and informants who infiltrated their many meetings from 1952 until 1976.

As protestors today decry modern-day domestic FBI surveillance of anti-war groups in places like Raleigh, N.C., the documents studied by the Current show that San Antonio was not immune from FBI Director J. Edgar Hoover’s campaign to discredit Civil Rights leaders from Martin Luther King, Jr., on down.

“Ain’t no doubt about it, we knew we were being watched,” Williams said. “There were times he’d say, ‘I think these lines are tapped.’ You would hear clicking and something strange going on. Oh, yeah. He was aware of it.”

Black first attracted the attention of the FBI in 1952 when he publicly protested the City Council’s decision to revoke a permit to speak for respected author and poet Langston Hughes. At the bottom of an FBI complaint form, a special agent suggests opening a “dead file” on the subject to continue collecting information about Black and others. From there on, the FBI tracked Black’s career by clipping area newspapers like the San Antonio Light and San Antonio Register. This was the start of the Second Red Scare and the Civil Rights Era, as the objectives of many Civil Rights leaders and black activists and the Communist Party USA began to dovetail in ways.

The documents show that law enforcement had trouble differentiating between those seeking to overthrow the capitalist state and those seeking equal rights under the law, sentiments at the core of foundational documents like the U.S. Constitution and Bill of Rights. In an August, 1952, report, an FBI agent quotes a secret source suggesting that Black as well as a fellow pastor and two others are “extremely radical and possibly Communists inasmuch as they seem to be in the forefront in ‘agitating’ for Negro rights in such a manner as to cause friction between the races.”

Black was eventually able to gain the support of the Good Government League, a coalition of white business interests that largely controlled the rotation of at-large council seats in the city. But even then he would insist on rotating meeting locations, Williams said. “We would be talking sometimes at the barber shop and he would tell [me], ‘Charles, let’s step outside.’ And he’d look around like he was suspecting someone was looking in the place with bugs or something.”

The new information about federal surveillance in San Antonio comes as no surprise to local political science professor Mario Salas. The longtime civil-rights and anti-war activist regularly uses declassified FBI papers to teach his political science classes at UTSA and Northwest Vista College. Many of those documents are heavily redacted, he said, but he’s beginning to fill in the gaps. “I actually have about 3,000 pages on my own, where they spied on me,” said Salas. “I was being watched from 1968 to 1976.”

Salas was a member of Student Non-Violence Coordinating Committee, which organized a breakfast program to feed low-income children modeled on a nationwide program launched by the Black Panther Party. He was also a regular protestor of the Vietnam War. “We always assumed our phones were tapped and our letters were being opened. We always made that assumption. And then, of course, we proved that we were right later on,” Salas said.

One FBI informant reported complaints that “the FBI is trying to ‘whip up a police state’ by putting fear in the minds of the people regarding … the civil rights movement … [and that] the FBI would stand around and watch a lot of Negroes being beaten up by local police and do nothing about it and then claim they were just an investigative agency and were not a police agency.”

Williams says San Antonio did not see the widespread chaos of other major U.S. cities, but he cautions against any overly rosy assessments. “I do remember when they used to take black men right down here to Pittman-Sullivan Park and whip ‘em and beat ‘em, the police would. … That was the Whipping Ground.”

One of few active white proponents of racial equality at the time, Solar San Antonio founder Bill Sinkin, recalls an Eastside railroad bridge where local police beat black protestors known as the “beating bridge.” Crosses still burned and black cats were set on fire at the homes of known demonstrators, Williams said. “It was separate, but there wasn’t nothing equal about it, you know.”

Another thing that set San Antonio apart from cities like Birmingham was the lack of white involvement. The few whites involved often had ties to the Communist Party USA. Perhaps unsurprisingly, many in the movement often discussed breaking with the non-violence promoted by leaders like Martin Luther King, Jr. In a 1965 FBI teletype marked “Urgent” and sent from San Antonio to offices in New York and Mobile, an agent reported that civil rights groups were preparing to protest the “QUOTE REIGN OF TERROR UNQUOTE IN SELMA, ALA.” and were discussing breaking with “QUOTE THE NONVIOLENT GROUP UNQUOTE OF CIVIL RIGHTS LEADERS. NO EXPLANATION WAS GIVEN TO THIS STATEMENT.”

Meetings followed at Mt. Zion, where an FBI informant was sitting in, relaying many of the march plans, including a statement by National Congress of Racial Equality Director James Farmer that CORE was now “out of the ‘non-violent class.’” That “as long as things go peaceably” at the demonstration, they would not react. “However, he is tired of seeing the Negro beaten and mistreated, and believes some kind of retaliation must be done.”

Black later led a peaceful protest in front of the Alamo involving 18 “Negro ministers” and nine church members. “We come in protest of the use of bullwhips, of clubs, of violence against a people who merely sought an elementary right — the right to vote,” Black was quoted in the San Antonio Light, March 10, 1965.

But Salas and those protesting the war in Vietnam were able to turn the mic back on the FBI, Salas said. “Luckily for me and a couple of other people … we had a spy within the spy network. We had a counterspy who was in the [San Antonio Police] intelligence network and he was taking our folders and telling us what he was doing with them … and he was reporting to us, too. It was his conscience. I’m pretty sure it was his conscience.”

Black’s grandson Taj Matthews recently returned to San Antonio to continue some of the work that grounded Black’s work: assisting senior citizens, working with juvenile offenders, and community revitalization. He was forgiving of those that may have divulged information to the FBI, saying, “We don’t know what kinds of threats might have been made. This might have been their only way out.”

Like those now being visited by FBI agents in relation to their anti-war work, Salas said the experience changed his thoughts on federally enshrined promises in the Bill of Rights. “What’s chiseled on paper and what’s actually taking place. I mean the FBI violated the First, the Fourth, the Fifth, and the Fourteenth Amendments on a regular basis.”

FBI Spokesperson Chris Allen said people should view the Black file as a “historical” document. “It should be viewed in light of the times and understanding it may not be reflective of how we operate today,” Allen said.

While civil rights gets increasingly short shrift in Texas public school textbooks, in Salas’ classes, at least, the Black files will now provide students greater understanding of what happened in San Antonio when people of color pushed for equal treatment under the law. “There’s a line that’s real fine between conducting an official criminal investigation and the line where you cross over into just intelligence gathering on American citizens,” Salas said. “That’s a fine line indeed.”

Gawd, think how much money is wasted trying to set up political social targets and this is activity that is not only sanctioned by the rightwingers, it is enthusiastically pursued even with no evidence at all. Like the modern analogy of a southern lynching carnival, the mindless machine keeps puking up lies unaware that it is destroying its own future destiny in the process. That is the heart of the arrogant deception of the devil; to build a person up with lies and material “success” so that they think of themselves as a “God”. Only one problem; the bargain is pretty binding after awhile. The person made a bargain with the devil; they sought to avoid it when the time of their death came up, but it was too late by then and there really was nothing even sanctified priests could do; down they went forever. . . And really it is a pity in the end, not even fitting to rage over anymore, just a damn shame. . .