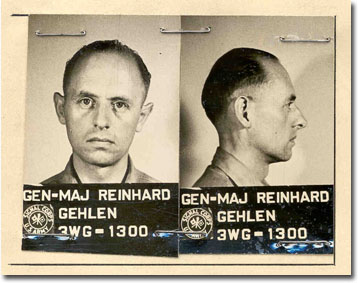 National Security Archive Electronic Briefing Book No. 146 Edited by Tamara Feinstein February 4, 2005 Washington D.C., February 4, 2005 - Today the National Security Archive posted the CIA's secret documentary history of the U.S government's relationship with General Reinhard Gehlen, the German army's intelligence chief for the Eastern Front during World War II. At the end of the war, Gehlen established a close relationship with the U.S. and successfully maintained his intelligence network (it ultimately became the West German BND) even though he employed numerous former Nazis and known war criminals. The use of Gehlen's group, according to the CIA history, Forging an Intelligence Partnership: CIA and the Origins of the BND, 1945-49, was a "double edged sword" that "boosted the Warsaw Pact's propaganda efforts" and "suffered devastating penetrations by the KGB." [See Volume 1: Introduction, p. xxix] The declassified "SECRET RelGER" two-volume history was compiled by CIA historian Kevin Ruffner and presented in 1999 by CIA Deputy Director for Operations Jack Downing to the German intelligence service (Bundesnachrichtendienst) in remembrance of "the new and close ties" formed during post-war Germany to mark the fiftieth year of CIA-West German cooperation. This history was declassified in 2002 as a result of the work of The Nazi War Crimes and Japanese Imperial Government Records Interagency Working Group (IWG) and contains 97 key documents from various agencies. This posting comes in the wake of public grievances lodged by members of the IWG that the CIA has not fully complied with the mandate of the Nazi War Crimes Disclosure Act and is continuing to withhold hundreds of thousands of pages of documentation related to their work. (Note 1) In interviews with the New York Times, three public members of the IWG said: "I think that the CIA has defied the law, and in so doing has also trivialized the Holocaust, thumbed its nose at the survivors of the Holocaust and also at the Americans who gave their lives in the effort to defeat the Nazis in World War II." - Former congresswoman Elizabeth Holtzman "I can only say that the posture the CIA has taken differs from all the other agencies that have been involved, and that's not a position we can accept." - Washington lawyer Richard Ben-Veniste "Too much has been secret for too long. The CIA has not complied with the statute." - Former federal prosecutor Thomas H. Baer The IWG was established in January 11, 1999 and has overseen the declassification of about eight million pages of documents from multiple government agencies. Its mandate expires at the end of March 2005. The documentation unearthed by the IWG reveals extensive relationships between former Nazi war criminals and American intelligence organizations, including the CIA. For example, current records show that at least five associates of the notorious Nazi Adolf Eichmann worked for the CIA, 23 other Nazis were approached by the CIA for recruitment, and at least 100 officers within the Gehlen organization were former SD or Gestapo officers. (Note 2) The IWG enlisted the help of key academic scholars to consult during the declassification process, and these historians released their own interpretation of the declassified material last May (2004) in a publication called US Intelligence and the Nazis. The introduction to this book emphasizes the dilemma of using former Nazis as assets:

James Critchfield, a CIA Nazi recruiter, also supported the political party that put Saddam Hussein in power "The notion that they [CIA, Army Counterintelligence Corp, Gehlen organization] employed only a few bad apples will not stand up to the new documentation. Some American intelligence officials could not or did not want to see how many German intelligence officials, SS officers, police, or non-German collaborators with the Nazis were compromised or incriminated by their past service… Hindsight allows us to see that American use of actual or alleged war criminals was a blunder in several respects…there was no compelling reason to begin the postwar era with the assistance of some of those associated with the worst crimes of the war. Lack of sufficient attention to history-and, on a personal level, to character and morality-established a bad precedent, especially for new intelligence agencies. It also brought into intelligence organizations men and women previously incapable of distinguishing between their political/ideological beliefs and reality. As a result, such individuals could not and did not deliver good intelligence. Finally, because their new, professed 'democratic convictions' were at best insecure and their pasts could be used against them (some could be blackmailed), these recruits represented a potential security problem." (Note 3) The Gehlen organization profiled in the newly posted CIA history represents one of the most telling examples of these pitfalls. Timothy Naftali, a University of Virginia professor and consulting historian to the IWG who focused heavily on the declassified CIA material, highlighted the problems posed by our relationship with Gehlen: "Reinhard Gehlen was able to use U.S. funds to create a large intelligence bureaucracy that not only undermined the Western critique of the Soviet Union by protecting and promoting war criminals but also was arguably the least effective and secure in the North Atlantic Treaty Organization. As many in U.S. intelligence in the late 1940s had feared would happen, the Gehlen Organization proved to be the back door by which the Soviets penetrated the Western alliance." (Note 4) The documents annexed in the CIA history posted today by the Archive echo the observations of Professor Naftali. While placing much of the blame on the Army Counterintelligence Corps' initial approach to Gehlen, this history emphasizes the CIA's own reluctance to adopt responsibility for Gehlen's organization, yet the documents show the CIA ultimately embracing Gehlen. Some of the highlights from this secret CIA documentary history include: A May 1, 1952 report detailing how Gehlen and his network were initially approached by U.S. army intelligence. (Document 6) Two evaluations of the Gehlen operation from October 16 and 17, 1946, advising against the transfer of Gehlen's organization to CIG hands and questioning the value of the operation as a whole. (Documents 21 and 22) A March 19, 1948 memorandum from Richard Helms, noting Army pressure for the CIA to assume sponsorship of the Gehlen organization, and continued concern over the security problems inherent in the operation. (Document 59) A December 17, 1948 report outlining the problems with the Gehlen organization, but ultimately recommending CIA assumption of the project. (Document 72) In answer to the question "Can we learn from history?", the IWG's consulting historians noted "The real question is not whether we will make use of our past to deal with the present, but rather how well we will do so. To do it well, we need these documents." (Note 5) "This secret CIA history is full of documents we never would have seen under the Freedom of Information Act, because Congress in 1984 gave the CIA an exemption for its 'operational' files, on the grounds that such files were too sensitive ever to be released," commented Thomas Blanton, director of the National Security Archive. "The Nazi War Crimes Disclosure Act has proven this assumption false. Release of these files has done no damage to national security, has provided information of enormous public interest and historical importance, and however belatedly, has brought a measure of accountability to government operations at variance with mainstream American values." See site for documents list http://www.gwu.edu/~nsarchiv/NSAEBB/NSAEBB146/index.htm#2