"... It’s the core of the Republican governing philosophy to strangle government revenues, so as to starve public interest government that serves the middle class. ..." 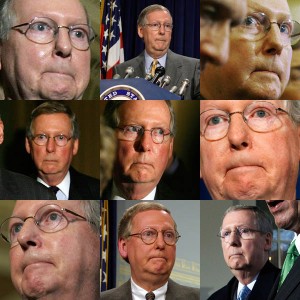 MSNBC’s Lawrence O’Donnell catches the dishonest bait and switch that Republican Senate Leader Mitch McConnell tried to pawn off on Meet the Press. *

McConnell repeatedly dodged and weaved to avoid answering a simple question from host David Gregory, which boils down to this: If you Republicans are so hysterical about the size of US budget deficits and cumulative debt, how do you avoid increasing them by a cumulative $3.2 trillion if you extend all of the Bush era tax cuts?

McConnell’s evasion was to argue the question shouldn’t even be asked because (1) we don’t have to offset costs from already “existing” programs and (2) you should never raise taxes in a recession.

Lawrence debunked the first dodge: the Republican tax cut legislation expires this year, as Republicans planned, precisely to avoid facing the deficit issue. Extending the cuts requires new legislation, so the question is relevant if you contend new costs must be offset to avoid adding to the deficit.

On the second part of the evasion, Lawrence notes McConnell, John Boehner and other Republicans have already signaled that Social Security and Medicare should be on the block to satisfy the deficit reduction hysteria they and foolish Democrats have fostered.

But the full response to this second McConnell evasion comes in the followup interview with David Cay Johnston. You can’t view the tax cut extension issue in isolation. Reducing government revenues while pushing deficit hysteria are not inconsistent in the Republican framework.

No, it’s the core of the Republican governing philosophy to strangle government revenues, so as to starve public interest government that serves the middle class. Drown a minimalist government in a bathtub — but this time, it’s not welfare recipients who take the bath but seniors.

That leaves only McConnell’s argument about not raising taxes during a recession, to which Lawrence and too many Democrats only weakly respond. Putting aside the irony that McConnell is making an essentially Keynesian argument for fiscal stimulus after his party almost unanimously opposed the concept that tax cuts will help boost aggregate demand and spending — he’s wrong on that too.

As most macro economists have noted before, if you’re worried about the effect of taxes on aggregate demand during a recession, it matters where the money goes. (E.g., see comparative multipliers) Who gets the tax cut? And what would they do with it?

Giving nearly $700 billion over ten years to the richest people in America is probably the worst form of economic stimulus; less will be spent to boost the economy, and more will be gambled on Wall Street. It’s just another form of Wall Street bailout, but without even the presumed justification of saving the financial sector.

Reallocating that $700 billion, and especially the next two years’ worth of $70 billion or so, to those much more likely to spend it, would provide 5 times or more economic stimulus. So a policy concerned about the recession would redirect money from the rich to those less well off. For example, Jamie Galbraith and friends have suggested we should augment Social Security payments until we’re closer to full employment.

McConnell and Republicans are thus advocating economic policies that are up-side-down, that would hurt the economy. Instead of protecting the economy in a downturn, their policies would make the economy worse, because the tax cut “stimulus” would be extracted by cutting payments to seniors who spend proportionally more and be given to rich people who spend proportionally less. (That’s part of what David Johnston means when he says McConnell’s ideas would hurt small businesses.) And stealing from seniors to make the rich richer would exacerbate income disparity in the US, which has been getting worse for decades and which some economists suspect may enable financial instability.

So the choice is clear: If you don’t want to worsen the economy, fatten Wall Street, worsen income disparity, make the rich richer and seniors poorer, then for heaven’s sake, don’t vote Republican. And if any Democrat proposes the same Republican agenda, don’t vote for them either. 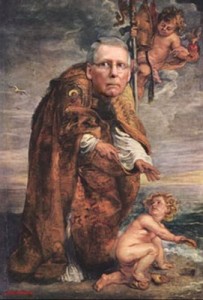 " ... Sunday on Meet the Press, Senate Minority Leader Mitch McConnell was as preposterous as House Minority Leader John Boehner on the same show two weeks ago, blustering about having to account for how much extending the Bush tax cuts for the megarich – set to expire in 2011 -- will deepen the deficit. Just as Boehner sputtered and refused to answer repeatedly, then blamed "this Washington game and their funny accounting" for the vexing fact that protecting the megarich will add $3.2 trillion to the deficit, so did McConnell obfuscate. 'Why did it all of a sudden become something that we, quote, 'pay for'?' McConnell asked host David Gregory, calling the tax cuts "existing tax policy."

It's hard to believe the entire country doesn't remember (with outrage) that Republicans under George W. Bush didn't have the courage to make the tax cuts permanent when they passed them in 2001. Phasing the cuts out in 2011 masked the enormous hit to the federal budget, and also ensured the GOP could pass them via reconciliation, with a simple majority. (Remember how Bolshevik that idea was when the Democrats proposed using it for healthcare reform?) ... "

Salon: Rand Paul Cozies Up to the Neocons