Dear Mr. Buffett Put Up Or Shut Up On Taxes 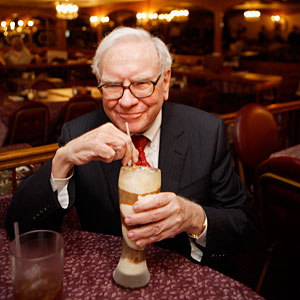 How does Buffett manage to exploit the tax code? He donates appreciated Berkshire Hathaway stock — which costs him pennies on the dollar — to charity, and receives a fat, juicy tax deduction at the appreciated price without having to pay a capital gains tax on the appreciation. (And, note that the money actually sits in his own charitable organization.) He’s saving income taxes with the ordinary deduction so it’s essentially a tax shelter.

He builds up his massive net worth and doesn’t have to sell stock while deferring capital gains. When he does take a capital gain, it’s at a 15% rate, and he lives in a low-tax state.

A call for change

These billionaires should not receive a tax deduction for appreciated shares. If they donate appreciated shares, they should have to pay a capital gains tax on those shares. Charitable donations should be capped (at $100,000 perhaps) because our government needs that charity.

Why not take it a step further and require billionaires to use mark-to-market accounting on their net worth? They should have to pay taxes each year on the new high net profits of their net worth.

If these changes are made, it will cause them to sell shares on their holdings, and you’ll see more and more shares sell off.

Why should the upper income let Buffett preach about paying higher taxes, when we’re already paying over 50% when you add it all up, and he’s probably paying less than 5%? The billionaires who want to talk about raising taxes in the public domain need to put their money where their mouth is and publish their tax returns. Let’s take a look behind the curtain and see what these people are paying in taxes.