"... Documents show the INS was not, as long thought, 'asleep at the switch.' ... 'They tried to institute proceedings against these people,' he said, only to be thwarted by the FBI, CIA or others in government. ... The records also describe the case of Viorel Trifa, an alleged student leader in Romania's fascist Iron Guard movement who became bishop of the Romanian Orthodox Church in the United States and once led prayers in Congress [at the request of Richard Nixon]. ..."

The FBI and other U.S. agencies ignored the murky pasts of alleged Nazi collaborators living in the United States because the government saw them as useful during the Cold War, according to newly released records.

Government historian Norman J.W. Goda, in a collaborative book based on records released Thursday at the National Archives, said the FBI "did not dig deep for the truth" on such people because it wanted them on America's side in the Cold War with the communist-controlled Soviet Union.

The government saw Nazi sympathizers as useful in countering any pro-communist leanings in immigrant communities in the United States, and the CIA and other agencies sometimes thwarted immigration authorities from beginning deportation proceedings, the records show.

In the thousands of files released, the CIA is also shown seeking the Immigration and Naturalization Service's help in easing travel in and out of America for Mykola Lebed, a Ukrainian accused of aiding German storm troopers in brutal suppression of local resistance during World War II.

The INS found "some basis for at least some of these allegations," according to a 1953 letter from the agency seeking direction from the Justice Department. If they were true, the agency said, Lebed should be deported.

But INS called off its investigation of Lebed at the CIA's request, even while declining at that time to give him freedom to leave and return to the United States at will.

"I do not feel that we are in any position to give such assurance, since there is a strong likelihood that subject is inadmissible under the immigration laws," the INS commissioner wrote.

Goda said Lebed was hired by the U.S. Army Counter Intelligence Corps, then in 1948, by the CIA. He entered the United States under the cover of the Displaced Persons Act.

Goda said the documents show the INS was not, as long thought, "asleep at the switch" during the years when many Nazi sympathizers made it into the country. "They tried to institute proceedings against these people," he said, only to be thwarted by the FBI, CIA or others in government. 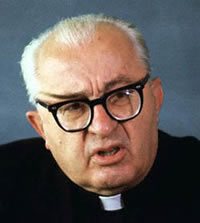 The records also describe the case of Viorel Trifa, an alleged student leader in Romania's fascist Iron Guard movement who became bishop of the Romanian Orthodox Church in the United States and once led prayers in Congress.

In a 1953 document, the CIA cited evidence that he had been a "moving spirit" in the 1941 Iron Guard rebellion and pointed to his manifesto openly calling for the pro-Nazi movement to prevail. Trifa denied being part of the group while acknowledging he was close to its leaders.

The FBI understood Trifa's background, Goda said, but FBI Director J. Edgar Hoover considered him a "very desirable part of the landscape during the Cold War.

"Men like him kept emigre communities from being sympathetic to communist governments back home," he said.

Trifa was stripped of his U.S. citizenship and deported in 1984, and the Portuguese government took him, Goda said.

The Nazi War Crimes and Japanese Imperial Government Records Interagency Working Group is releasing the book by its historians Thursday. Called "U.S. Intelligence and the Nazis," it details declassified documents released by the CIA, FBI, Army, State Department and other U.S. agencies under the Nazi War Crimes Disclosure Act.

The group has overseen the declassification and release of roughly 8 million pages of U.S. government records related to war criminals and crimes committed by the Nazi and Japanese Imperial Government during World War II.

In another case, former Croatian interior minister Andrija Artukovic slipped into the United States under a false name in 1948. Goda said he had authorized anti-Serb and anti-Jewish legislation in Croatia, as well as mass shootings, deportations and creation of concentration camps.

He said the Justice and State departments stymied Yugoslavia's attempts to have him extradited for years, and Hoover believed he had "great potential propaganda value." He was finally extradited in 1986, sentenced to death, and died awaiting execution.

The papers also detail the case of John Avdzej, a Byelorussian who was installed as a Polish mayor by the Germans during the war and came to America in 1950. Goda said Avdzej was thought to have participated in the execution of thousands of Jews.

When this background emerged, the FBI field office in New Jersey at first wanted to interview him to see whether he was a threat to U.S. security, but then asked headquarters to consider him as a double agent who could infiltrate immigrant circles in the state.

Hoover said a review of Avdzej's file revealed no "substantial subversive activity" or potential as an informant, and closed the case. But it did not stay closed. Like Trifa, Avdzej was forced to leave the country and lost his citizenship in 1984.