Television Under The Swastika – The History Of Nazi Television 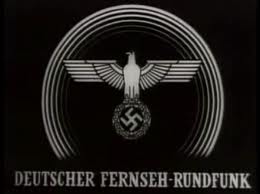 Legend has it that the triumphal march of television began in the United States in the ‘fifties. But in reality its origins hark back much further. As early as the ‘thirties, a bitter rivalry raged for the world’s first television broadcast. Nazi Germany wanted to beat the competition from Great Britain and the U.S. – at all costs. Reich Broadcast Director Hadamovsky christened the new-born “Greater German Television” in March 1935. And it was only in September 1944 that the last program flickered across the TV screens.

For a long time the belief persisted that only very few Nazi programs had survived, but SPIEGEL TV has now succeeded in tracking down a stock of television films and reports which have remained intact since the end of the Third Reich.

These include extensive coverage of the 1936 National Socialist Party Convention in Nuremberg, which recalls today’s live broadcasts, and of a 1937 visit Benito Mussolini paid to Berlin. Interviews with high-ranking Nazis such as Albert Speer, Robert Ley and the actor Heinrich George are among the finds, along with numerous special reports (i.e. on the Reich Labor Service), a cooking show and the lottery drawing.

Television anchorwomen greet their tiny audiences in specially installed television parlors in Berlin, Munich and Hamburg with “Heil Hitler.” The entertainment programs are particularly curious. Cabaret artists are featured – alongside singers extolling the virtues of the “brown columns of the SA and SS.”

This documentary by Michael Kloft will reveal a rare and intriguing view of the Third Reich, one far removed from the propagandistic presentations of Leni Riefenstahl & Co. and the weekly cinema newsreel, yet no less ideologically slanted. This is Nazi Germany expressed in an aesthetic medium that we ourselves have only really known since the ‘fifties.