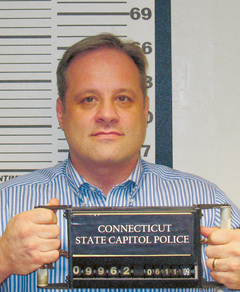 BROOKLYN – Shock jock Hal Turner of North Bergen took the witness stand in his federal trial Wednesday and accused the FBI of urging him to make violent statements as a way of infiltrating extremist right-wing groups.

Turner, who built an audience of neo-Nazis and white supremacists with his radio show, is on trial here on a single charge of threatening three Chicago-based federal appeals court judges.   The charge is based on a posting Turner made on his radio network blog last June in which he said the judges “deserved to be killed” for their ruling in a gun control case.

If convicted, he faces 10 years in prison.

In an investigative report last November, based on FBI documents, The Record outlined Turner’s secret FBI role in infiltrating the same groups who were drawn to his radio show and blog.  Besides neo-Nazis, Turner said he made contact with the Ku Klux Klan and the Aryan Nation.

In more than two hours of testimony before lunch, Turner described how he was recruited in 2003 by the FBI’s Newark-based Joint Terrorism Task Force.   He said he was paid “in excess of $100,000” by the FBI during his almost five years as an informant.

After the husband and mother of Chicago-based U.S. District Court Judge Joan Lefkow were murdered in 2005, Turner said the FBI asked him to “ratchet up the rhetoric” on his radio show in an attempt to “flush out” the killer. As it turned out, Lefkow’s husband and mother were not murdered by right-wing extremists but by a man who was disgruntled with one of her rulings.

Turner’s testimony, which is expected to continue all day, marked a dramatic turnabout in the trial.

In gripping testimony on Tuesday, all three Chicago appellate court judges took the stand and said they felt threatened by Turner’s blog posting that they “deserved to be killed.”

During the first two days of the trial, while prosecutors presented their side of the case, there was no mention of Turner’s FBI link.  Indeed, U.S. District Court Judge Donald Walter did not even permit defense attorneys to present an opening statement until after prosecutors had finished introducing evidence and rested their case.