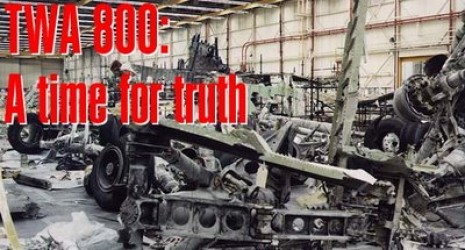 Solid fuel to propel missiles is not an everyday commodity, missile experts say, but the basic recipe remains the same for many of the world’s rockets and military organizations.

“If you picked up a piece of the stuff it would look like hard rubberized material,” said a retired Hughes Missiles engineer and propellants specialist who asked not to be named. “Most people would not recognize solid fuel if they pick it up.”

James Sanders, an ex-Southern California policeman, says he acquired a sample from TWA Flight 800 seats embedded with red residue. He had the sample analyzed and is convinced laboratory tests reveal solid fuel left a telltale wake through the plane before the jumbo jet disintegrated, killing 230 people. Linking that lab analysis with an analysis of crash reports, he said, points directly to a missile as the cause of the tragedy.

In January, he took one sample of the residue from seats in rows 17-19 to West Coast Analytical Service, Inc., in Santa Fe Springs.

Sanders provided The Press-Enterprise with a copy of the one-page report, dated Jan. 31. According to the test, the material included:

“The actual metals and mixtures depends on how fast you want it to burn,” the retired Hughes engineer said. He spoke on the condition he would provide basic information but would not have his name disclosed.

“Things like magnesium and aluminum make it work,” he said of solid fuel. “It depends on how fast you want the motor to burn. Rocket motors on bazookas have to get to high speed rapidly. The rocket coming out of a bazooka tube has to burn in a millisecond so the exhaust doesn’t burn the person firing.

“Some metals are included so they don’t burn so fast. Standard type missiles, where they burn for several minutes, are designed to to go on a hundred miles or so. So you mix in something to keep them burning.

“Most motors have wires running through it, or to give it structure, and include solder. Antimony is in solder or the lead could have been part of the wiring. I’ll tell you the truth, I’ll be honest: In the past, very few missiles were environmentally friendly.”

Sanders admits he had no idea what to look for when he began wondering about solid fuel.

Finally, he said, he reached Thiokol Corp., and was told missile propellent had three basic components, essentially unchanged the last decade except for minor “proprietary” adjustments. Government labs, Sanders said, should be able to determine this residue’s fingerprint.

In Sanders’ sample, he believes the magnesium is ocean salt, while silicon, mixed with a small amount of copper, is the essential ingredient in synthetic rubber.

The rubber, in liquid form, is the base into which the fuel is mixed before being poured into a container where it hardens into solid fuel.

“The rubber bonds the material together so it doesn’t fragment,” the Hughes engineer said. “If a solid motor cracks, you have a disaster. It burns too fast and blows up. If dropped, it has to withstand breaking.”

Aluminum powder is the preferred fuel. Calcium is mixed with a perchlorate to provide the pyrotechnic effect. Silicon, mixed with a small amount of copper, is the essential ingredient for synthetic rubber which, in liquid form, is the base into which aluminum powder, calcium and a substance that provides oxygen are mixed, then poured into a container where it hardens into solid fuel, waiting for use.

This story appeared in The Press-Enterprise Monday, March 10, 1997