"... The May 2012 gathering of NATO officials in Chicago was wholly initiated, incited and put into motion by two undercover cops. ... The Chicago Tribune threw down the gauntlet this week in the war on dissent — and came in solidly on the side of the billy club and the black-masked police provocateur. ..."

On February 10, the influential Chicago Tribune published an extraordinary editorial demanding that the judge in the NATO 3 case impose harsh sentences on defendants Brian Church, Jared Chase and Brent Betterly, who’d been found innocent days earlier of state terrorism charges. The judge successfully encouraged the jury to convict the three of lesser mob action and arson charges. The NATO 3’s ‘crime’ — assembling four primitive Molotov cocktails on the eve of protests to oppose the May 2012 gathering of NATO officials in Chicago — was wholly initiated, incited and put into motion by two undercover cops.

The Tribune op ed could have been scripted by States’ Attorney Anita Alvarez, who vehemently defended her political prosecution of the NATO 3. Dozens of respected activists and groups came together to rebut the Tribune’s endorsement of state-sponsored spying, entrapment and the use of undercover police agent provocateurs to wage war on dissent — a response that the Tribune has refused to publish. Instead, that full response is published below.

At least 36 states have passed state terrorism statutes — essentially mini-PATRIOT Acts — in the wake of 9-11. Illinois’ law has been applied only once before, to convict a man for ‘inflammatory’ rap lyrics he’d written. That conviction was thrown out on appeal. In 2010, a New York appeals court also threw out a state terrorism conviction in a gang crimes case. Civil libertarians of all political stripes had opposed the law’s use in the case as an undue expansion of prosecutorial power.

But that hasn’t stopped states from testing the waters with these vague and constitutionally compromised statues: Keystone XL pipeline opponents are currently battling state terrorism charges in Oklahoma — for dropping glitter inside a building during a peaceful banner drop.

Chicago has a long tradition of criminalizing protest and manufacturing crime where none exists to dirty up political dissent — dating back to the cops’ infamous 1960s-era Red Squad spying and disruption. Alvarez, police chief Garry McCarthy and Chicago Mayor Rahm Emanuel continue to refuse to disclose the scope of police spying in the run-up to the NATO meeting, which included collaboration with state and federal agencies. That spying has continued, raising concerns that cities like Chicago are seeing a full-bore reinstatement ofCOINTELPRO-style Red Squads.

Alvarez has a long track record of defending police abuse, brutality, and torture — including refusing to re-examine dozens of wrongful convictions of police torture victims during the tenure of her former boss, ex-Chicago mayor Richard Daley, who was States’ Attorney in the 1980s. A week before the NATO 3 verdict, a special prosecutor cut a plea deal with Daley nephew R.J. Vanecko, who will serve 60 days in jail for punching and killing a youth 10 years earlier. Alvarez’ office had dodged the case for a decade. Yet Alvarez plans to ask for lengthy prison time for the NATO 3, who harmed no-one — but who could serve up to 30 years in prison.

Chicago’s top cop, Garry McCarthy, is no stranger to police spying or police violence, either. He was a high-ranking NYPD cop during the 2004 Republican National Convention, where tens of thousands of protesters were corralled, abused and criminalized. He allowed a secret NYPD police spy ring to surveil Muslims in Newark, NJ when he ran that police department. And he joined Alvarez and Emanuel in defending the political demonization of the NATO 3 and in inflaming the specter of dangerous ‘anarchists’ in the run-up to the NATO meeting. The best his department could do to back up that bogus fear-mongering was to set up the NATO 3.

Despite Judge Wilson’s severe evidentiary restrictions, the NATO 3 defense team was able to expose the larger scope of police spyingduring NATO preparations. Civil libertarians say that’s critical in undermining police entrapment in terrorism cases, and defense attorneys have called for Alvarez to be held accountable forovercharging the defendants. The Tribune — which has steadfastly defended Alvarez, McCarthy and Emanuel in this case, just as they’ve defended the excesses of McCarthy’s police department and the corporate welfare schemes of Mayor Emanuel — instead demands that a judge who will ask its editorial board to support his re-election show the same kind of punitive extremism that McCarthy, Alvarez and Emanuel have embraced.

The Chicago Tribune — the historic voice of the elite — knows which side they’re on. A broad sector of the public — from political activists and civil rights attorneys to nuns and priests — rejects that jackboot loyalty. 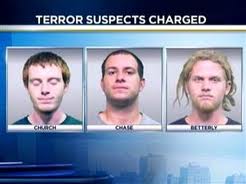 The Chicago Tribune threw down the gauntlet this week in the war on dissent — and came in solidly on the side of the billy club and the black-masked police provocateur. In its February 10 op ed piece, the paper’s apparatchiks undertake what all good instruments of the jack-boot state do — they reinvented history.

It is simply factually dead wrong for the Tribune to assert that “city officials went to great lengths to facilitate [protesters’] right to assemble” during the May 2012 NATO protests. In fact, protesters had to battle for months for the right to protest — including against Mayor Rahm Emanuel’s infamous “sit down and shut up” ordinance. And hundreds of protesters who were kettled and assaulted by police on May 20, 2012 would flatly dispute the Tribune’s characterization of that calculated police violence as ‘turning the other cheek.’

Activists also learned more during the NATO 3 trial about what many had suspected — that Emanuel and police superintendent Garry McCarthy have stewarded the full-bore reinstatement of the city’s infamous Red Squad. Under Emanuel’s and McCarthy’s watch, police squandered untold public dollars to spy on constitutionally protected activity and position undercover cops as agent provocateurs to entrap protesters in ‘crimes’ wholly incited and manufactured by those undercover cops. And that spying has not ended. One of those officers involved in surveilling and infiltrating NATO protest efforts joined a volunteer health care project as a volunteer street medic — and was still spying on activists a year later.

It also bears noting that among the ‘masked agitators, dressed in black’ in the run-up to the NATO meeting were the two undercover officers at the heart of the NATO 3 entrapment: Nadia Chikko and Mehmet Uygun. One would have to be asleep at the switch — or an apologist for state repression — to assume there was not the same sort of police endeavor underway during the protests themselves.

But Judge Thaddeus Wilson adamantly insisted that issues related to First Amendment concerns would not be aired in this trial — in effect, guaranteeing that the police overreach and abuse at the heart of this manufactured case would never be disclosed to the jury and the public.

The Tribune has never asked Emanuel, McCarthy or States Attorney Anita Alvarez how much the investigation, incarceration and trial of the NATO 3 has cost the taxpayers. More broadly, the Tribune has never asked the City of Chicago for an honest accounting of what it cost taxpayers to police the NATO summit in real dollars. That’s a remarkable lapse by a newspaper known for its persistent drumbeat to account for — and cut where possible — public dollars for vital front-line public services that range from public health to public education.

The Tribune’s shrill call to lock up the NATO 3 and throw away the key mirrors a longstanding tradition of the paper’s editorial board. The Tribune invoked the same cry for blood more than 125 years ago in the Haymarket 8 case, when its editors at one point offered to pay jurors for a guilty verdict against those defendants. Four were executed on November 11, 1886.

Today, the Tribune has embraced that same unprincipled extremism — by endorsing police policies that create crimes where none exist and derail the fundamental right to dissent unmolested by police agent provocateurs and law enforcement spies. Totalitarianism is informed by a state strategy to dirty up and derail public opposition to government policy. Anita Alvarez, Rahm Emanuel and Garry McCarthy have been happy to embrace this sort of despotism. And the Tribune has cosigned it.

Father Bob Bossie, SCJ: The Priests of the Sacred Heart

Donald Goldhamer, Chicago Committee to Defend the Bill of Rights

Arny Stieber, on behalf of the Chicago Chapter of Veterans For Peace, ChicagoVFP.org

Chris Geovanis is a Chicago media activist, advocacy journalist and member of the HammerHard MediaWorks collective. You can reach her via Twitter @heavyseas, via her Facebook page or at chrisgeovanis(at)gmail.com