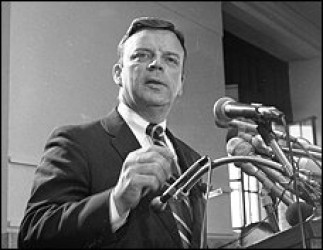 Edward V. Hanrahan's political career was ruined after a controversial raid by a squad of police officers in which two Black Panther leaders were killed. (1970 Photo By Edward S. Kitch -- Associated Press)

Edward V. Hanrahan, 88, the former Cook County, Ill., state's attorney under whose oversight a squad of police officers raided the Black Panther Party headquarters in 1969 and killed two of its leaders, died June 9 of complications from leukemia at his home in River Forest, Ill., a Chicago suburb.

Fourteen police officers assigned to his office, acting on a tip from an FBI informant, burst into the West Side Chicago apartment early Dec. 4, 1969, in search of illegal weapons. Police had raided it three times before, but this time they were armed with a map that showed where Panther leaders Mark Clark and Fred Hampton slept. In a fusillade, Clark and Hampton were killed.

Mr. Hanrahan, who had made his name as a law-and-order prosecutor unafraid to pursue organized crime figures, defended the police tactics, saying the black activists shot first. Later probes showed that one of the Panthers had fired at least one shot, and the multiple bullet holes that Mr. Hanrahan pointed to as evidence of more were exposed nail heads. The police fired between 82 and 99 shots in the four-room apartment.

Black and white Chicagoans were deeply enraged and frightened by the event. Some considered the raid a massacre and blamed J. Edgar Hoover's FBI Cointelpro covert intelligence program for setting it up. Others thought Hampton was a dangerous radical -- just before his death he had told the Chicago Sun-Times that he was "at war with the pigs." The radical Weathermen two months earlier had staged the Days of Rage, an anti-Vietnam War demonstration that attempted to spark revolution. And no one had forgotten the riots at the Democratic National Convention a year before.

Along with the police, Mr. Hanrahan was indicted on charges of conspiracy to present false evidence and obstruction of justice, but all were later cleared. A protracted civil suit ended in 1982, with the survivors of the raid and families of the deceased receiving an award of $1.85 million. A judge ruled that the government had conspired to deny the Panthers their civil rights.

Mr. Hanrahan, who had often been talked about as a possible mayor or Illinois governor, never recovered his political career. He lost a 1972 reelection campaign, two mayoral races in the 1970s and a campaign for alderman in the early 1980s. He went into private practice and often defended suburban governments as well as police and fire officials, said his nephew, Tom Wheeler.

He was not bitter about what transpired, Wheeler said, nor was he a bigot, an accusation that dogged him for years. The Black Panthers, originally organized to protect minority communities from police brutality, created medical clinics and provided free food to schoolchildren before becoming a Marxist organization. Clark and Hampton were held up as martyrs to the cause, and Hanrahan was excoriated as a racist.

"Nothing could be further from the truth. At the end of his life, he traveled, he learned two foreign languages, he studied philosophy and the Bible, he learned to play the piano and joined a book club," Wheeler said. "He served meals to the homeless" through a church shelter program.

Edward Vincent Hanrahan was born in Coconut Grove, Fla., and moved to Chicago with his family when he was a boy. He graduated from the University of Notre Dame. During World War II, he served in the Army Signal Corps in the United States, and in 1948 he received a degree from Harvard Law School.

Mr. Hanrahan ran for Congress unsuccessfully in 1960 and worked in the district attorney's office until the powerful Mayor Richard J. Daley sponsored him to President Lyndon B. Johnson as a candidate for U.S. attorney, the leading federal prosecutor for northern Illinois.

"Let me say, Mr. President, with great pride and honor, he's a precinct captain," Daley told Johnson. "You got him, you got him," Johnson responded.

In the all-power-is-local world of Chicago politics, the lowly job trumped any other qualification. Four years later, in 1968, Daley "promoted" Mr. Hanrahan from U.S. attorney to Cook County state's attorney. But after the Black Panther raid, the Daley Democratic political machine tried to drop Mr. Hanrahan from the ticket in 1972. He won the primary, but largely because of the anger of black voters he lost the general election to a Republican.