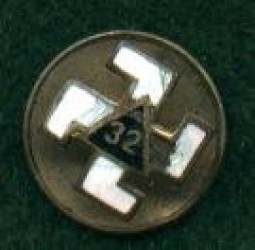 Well, this election is fast turning into an opposition-research-fueled shitstorm. On Meet The Press Sunday, Democratic strategist Paul Begala casually mentioned that John McCain sat on the board of the U.S. Council For World Freedom. And the Associated Press this morning elaborated on exactly what that entails [see below]. "The U.S. Council for World Freedom was part of an international organization linked to former Nazi collaborators and ultra-right-wing death squads in Central America.," AP said. Very interesting! But the rest of the article doesn't give any details on these Nazis or the role of this group, called the World Anti-Communist League, in launching a "Cocaine Coup" that turned Bolivia into a drug trafficking hub and hotbed of brutal torture. Luckily a former AP and Newsweek reporter named Roberty Parry wrote an oddly fun book called Lost History, which can provide further illumination:

In 1966, the Asian Peoples Anti-Communist League expanded into the World Anti-Communist League, an international alliance that pulled together traditional conservatives with former Nazis, overt radicalists and Latin American "death squad" operatives. In an interview, reitred U.S. Army Gen. John K. Singlaub, a former WACL president], said "the Japanese [WACL] chapter was taken over almost entirely by the Moonies."

Through WACL and other political relationships, [Moonies founder Sun Myung] Moon built bridges to right-wing forces in South America during the 1970s.... [a] Bolivian WACL leader [last name Gasser]... was a leading figure in the coup....

...CAUSE, one of Moon's anti-communist organizations, listed as members nearly all the leading Bolivian coup-makers.

...An architect of the Bolivian coup was World War II Nazi fugitive Klaus Barbie, who was working as a Bolivian intelligence officer under the name Klaus Altmann. Barbie drew up plans modeled after the 1976 Argentine coup and contacted the Argentines for help. As the coup took shape, Barbie organized a secret lodge, called Thule, where he lectured his followers under swastikas by candlelight. [[!!!??!!]]

....The slaughter was fierce.... Labor leader Marcelo Quiroga... 'was dragged off to police headuarters to be the object of a game played by torture experts imported from Argentina's dreaded Mechanic School of the Navy...' [[-pages 38-41, 200-202]]

The WACL/Moonie/Barbie forces then transported cocaine on behalf of the drug lords they had made a deal with prior to the coup, Parry wrote. The drug trafficking eventually became an issue for the U.S. government (despite evidence the CIA was complicit in the coup) and the Moonies pulled out. And about a year later the Moonies, apparently flush with cash, launched the conservative Washington Times at an alleged cost of about $100 million per year! Very interesting.

Supposedly McCain was involved with this WACL council about as little as Obama was involved with 1960s radical Bill Ayers. "I don't recall talking to McCain at all on the work of the group," Singlaub (the retired Army general from the quote above) told AP. Singlaub, however, doesn't remember McCain quitting the group in 1984 as McCain has long claimed he did. That's probably because McCain attended the group's 1985 "Freedom Fighter Of The Year" awards! (See HuffPo link at top.)

Dredging up this McCain link is a crafty bit of flackery on behalf of Barack Obama's campaign in that it seems to neutralize the issue of Obama's affiliation with Ayers. Trouble is, the Ayers issue was useful mainly as an excuse to paint Obama as he was already seen by some voters — an un-American terrorist sympathizer. And the people who think that aren't going to care about some extreme anti-communist group McCain affiliated himself with a long time ago. The people who might care about that, in fact, are mostly already voting for Obama. So, nice going, oppo-wise, linking McCain with Nazis and so forth, but it's probably not going to stop all this "Who Is Barack Obama?" business.

WASHINGTON (AP) -- GOP presidential nominee John McCain has past connections to a private group that supplied aid to guerrillas seeking to overthrow the leftist government of Nicaragua in the Iran-Contra affair.

McCain's ties are facing renewed scrutiny after his campaign criticized Barack Obama for his link to a former radical who engaged in violent acts 40 years ago.

The U.S. Council for World Freedom was part of an international organization linked to former Nazi collaborators and ultra-right-wing death squads in Central America. The group was dedicated to stamping out communism around the globe.

The council's founder, retired Army Maj. Gen. John Singlaub, said McCain became associated with the organization in the early 1980s as McCain was launching his political career in Arizona. Singlaub said McCain was a supporter but not an active member in the group.

"McCain was a new guy on the block learning the ropes," Singlaub told The Associated Press in an interview. "I think I met him in the Washington area when he was just a new congressman. We had McCain on the board to make him feel like he wasn't left out. It looks good to have names on a letterhead who are well-known and appreciated.

"I don't recall talking to McCain at all on the work of the group," Singlaub said.

The renewed attention over McCain's association with Singlaub's group comes as McCain's campaign steps up criticism of Obama's dealings with William Ayers, a college professor who co-founded the Weather Underground and years later worked on education reform in Chicago alongside Obama. Ayers held a meet-the-candidate event at his home when Obama first ran for public office in the mid-1990s.

Obama was roughly 8 years old when Ayers, now at the University of Illinois at Chicago, was working with the Weather Underground, which took responsibility for bombings that included nonfatal blasts at the Pentagon and U.S. Capitol. McCain's vice presidential nominee, Sarah Palin, has said that Obama "pals around with terrorists."

In McCain's case, Singlaub knew McCain's father, a Navy admiral who had sought Singlaub's counsel when McCain, a Navy pilot, became a prisoner of war and spent 5 1/2 years in North Vietnamese hands.

"John's father asked me for advice about what he ought to do now that his son had been shot down and captured," Singlaub recalled in one of two recent interviews. "I said, 'As long as you don't give any impression that you care more about him than you care about any of the other prisoners, he won't be treated any differently.'"

Covert arms shipments to the rebels called Contras, financed in part by secret arms sales to Iran, became known as the Iran-Contra affair. They proved to be the undoing of Singlaub's council.

In 1987, the Internal Revenue Service withdrew the tax-exempt status of Singlaub's group because of its activities on behalf of the Contras.

Elected to the House in 1982 and at a time when he was on the board of Singlaub's council, McCain was among Republicans on Capitol Hill expressing support for the Contras, a CIA-organized guerrilla force in Central America. In 1984, Congress cut off CIA funds for the Contras.

Months before the cutoff, top Reagan administration officials ramped up a secret White House-directed supply network and put National Security Council aide Oliver North in charge of running it. The goal was to keep the Contras operational until Congress could be persuaded to resume CIA funding.

Secretly, Singlaub worked with North in an effort to raise millions of dollars from foreign governments.

McCain has said previously he resigned from the council in 1984 and asked in 1986 to have his name removed from the group's letterhead.

"I didn't know whether (the group's activity) was legal or illegal, but I didn't think I wanted to be associated with them," McCain said in a newspaper interview in 1986.

Singlaub does not recall any McCain resignation in 1984 or May 1986. Nor does Joyce Downey, who oversaw the group's day-to-day activities.

"That's a surprise to me," Singlaub said. "This is the first time I've ever heard that. There may have been someone in his office communicating with our office."

"I don't ever remember hearing about his resigning, but I really wasn't worried about that part of our activities, a housekeeping thing," said Singlaub. "If he didn't want to be on the board that's OK. It wasn't as if he had been active participant and we were going to miss his help. He had no active interest. He certainly supported us."

© 2008 The Associated Press. All rights reserved. This material may not be published, broadcast, rewritten or redistributed. Learn more about our Privacy Policy.

McCain Pals Around with Racists and Anti-Semites (Wizbang Blue)... the extremist "U.S. Council for World Freedom" an ultra-conservative right wing organization which was affiliated with the "World Anti-communist League" ...wizbangblue.com/2008/10/05/mccain-pals-around-with-racists-and- antisemites.php - 64k

Council for the Defense of Freedom - SourceWatchHe has served on the board of directors of the U.S. Council for World Freedom as well.(12) Parker is on the National Advisory Board of the American Freedom ...www.sourcewatch.org/index.php?title=Council_for_the_Defense_of_ Freedom - 40k

The Washington MonthlyOct 7, 2008 ... Begala argued that this whole approach may backfire, given McCain's background with the "very right-wing" U.S. Council for World Freedom, ...www.washingtonmonthly.com/archives/individual/2008_10/015061.php

Why McCain's Time With Council Of World Freedom Matters The U.S. Council of World Freedom claimed to be cleansed of these elements. ...www.huffingtonpost.com/2008/10/06/why-mccains-time-with-cou_n_ 132470.html