By Ike Sriskandarajah - Ctr. for Investigative Reporting, May 12, 2022 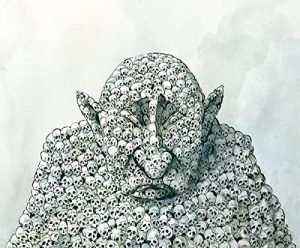 Our recent Reveal episode My Neighbor the Suspected War Criminal examines the United States’ thin record in bringing war criminals to justice. For more than 40 years, the U.S. government has devoted resources to investigating suspected human rights violators – both through the Department of Justice and, more recently, U.S. Immigration and Customs Enforcement. But rarely do suspects face charges for their alleged atrocities.

Here are six takeaways from the investigation:

Once glorified for its dogged Nazi hunting, the Department of Justice rarely brings charges under the four criminal statutes that address serious war crimes and human rights violations – and has only ever made one conviction.

Congress passed laws to give federal prosecutors the power to bring charges for genocide in 1988, torture in 1994, war crimes in 1996 and recruitment of child soldiers in 2008. But the only conviction under any of those statutes happened in 2009. That’s when a judge in Florida sentenced Chuckie Taylor, the U.S.-born son of a Liberian dictator, to 97 years in prison for torture in the West African nation.

Known or suspected war criminals live comfortably across the United States, sometimes in the same communities as their victims who had fled persecution. In some cases, the suspects return to their home countries, where they did not face punishment for their crimes. David Scheffer, the first American diplomat to hold the post of ambassador at large for war crimes issues under the Clinton administration, has called the Justice Department’s failure to criminally prosecute suspects an “abdication of responsibility by the U.S. government.”

Instead of using the substantive criminal statutes, the U.S. charges human rights violators with lesser charges of immigration fraud.

Many who work on these cases refer to this as “the Al Capone way” – a reference to how the murderous 1920s mobster ultimately was convicted of tax evasion. Immigration cases can lead to suspected war criminals being stripped of their residency status or U.S. citizenship, but the Department of Justice has not made public the number of denaturalization cases for human rights violators to which it has contributed. The department’s counterparts in ICE’s Human Rights Violators and War Crimes Center claim to have 1,667 active cases. In 2020, its work resulted in five criminal arrests and 30 people being deported or voluntarily leaving the country. Compare that to the more well-known part of the government’s immigrant removal apparatus: That same year, special agents with Homeland Security Investigations made 31,915 criminal arrests and ICE removed 185,884 individuals.

Prosecuting human rights violators is not a priority. This is borne out in the budgets at the Justice Department and ICE.

When the Justice Department went from investigating solely Nazi war criminals to taking on all human rights violators inside the U.S. in 2004, its budget stayed the same, Elizabeth “Barry” White, a former chief historian for the department, recalled in an interview. The ICE Human Rights Violators and War Crimes Center’s annual budget of $5.3 million is essentially a rounding error in the agency’s $8 billion budget. ICE spends more on a program to improve its data management system and nearly three times as much to investigate knock-offs. War criminals are an afterthought. A 2020 Senate appropriations bill calls it out: “There are reports that ICE has devoted insufficient resources to hold suspected foreign human rights violators accountable.”

Current U.S. laws are not sufficient to address and ensure accountability for perpetrators of crimes against humanity found in the United States.

Over 100 countries have signed an international treaty that allows them to prosecute people on their soil for crimes against humanity and allows for their citizens to be charged with such crimes in other countries. The U.S. is one of just a handful of countries to reject the treaty, despite American prosecutors being the first to charge Nazis for such crimes at the Nuremberg Trials in Germany in the 1940s.

Sen. Dick Durbin, D-Ill., has introduced a crimes against humanity bill to Congress, where it has languished since 2009. Officials at the Justice Department and former ambassadors say this law would greatly expand the U.S.’ ability to prosecute serious human rights offenders. Indeed, the Justice Department’s most veteran human rights prosecutor, Eli Rosenbaum, said the lack of a crimes against humanity statute prevented the U.S. from prosecuting Cambodia’s Pol Pot, notorious for killing nearly 2 million of his perceived government opponents in the 1970s. “Hearing the name ‘Pol Pot’ will forever send a chill up the spines of decent people everywhere, and he ought never to have escaped justice,” Rosenbaum said in an American Bar Association lecture.

By contrast, earlier this year, a former Syrian intelligence officer was sentenced in Germany to life in prison for crimes against humanity, including torture, murder and rape of detainees in an infamous military intelligence facility in Damascus.

The lack of criminal prosecutions has forced victims of atrocities to seek justice through other means: civil suits against perpetrators.

Gotabaya Rajapaksa was a naturalized U.S. citizen when he returned to Sri Lanka to become secretary of defense in 2005. In the following years, he oversaw a scorched-earth campaign to end Sri Lanka’s 26-year civil war. It included bombing Tamil civilians inside a safe zone, shelling hospitals, killing surrendered fighters, illegally arresting and torturing civilians, and violently trying to silence a free press. Rajapaksa is accused of ordering the killing of one of the most prominent and critical journalists in the country, Lasantha Wickrematunge, in 2009. The U.S. government knew about these allegations for years and still allowed Rajapaksa to travel freely between the U.S. and Sri Lanka. (As an American citizen, he was subject to U.S. laws, including the criminal statutes that address human rights violations.)

In 2019, fed up with government inaction, two nongovernmental organizations filed separate lawsuits in California accusing Rajapaksa of the torture of a Tamil man and the killing of Wickrematunge. Months later, Rajapaksa renounced his U.S. citizenship and was elected president of Sri Lanka. Now, as head of state, he is immune from being sued. Other human rights violators, however, have been held accountable through civil suits: The Center for Justice & Accountability, which filed the lawsuit over Wickrematunge’s killing, has won two dozen cases in U.S. courts on behalf of victims of atrocities, resulting in $700 million awarded in damages, according to its executive director.