UK: Row over US Cover-Up of Torture of Detainees in Iraq

The US government is at the centre of a growing row over the cover-up of torture of detainees in Iraq following the leak of almost 400,000 army field reports.

” … The greatest controversy will be over the apparent complicity of the American forces in covering up the widespread and brutal torture of Iraqi civilians. … “

By Robert Mendick and Richard Spencer
The Telegraph | October 23, 2010 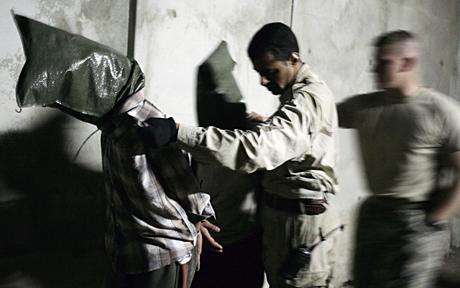 It prompted calls for an inquiry in the US and in the UK into whether the coalition was complicit in the torture and murder of civilians by Iraqi security forces by failing to prevent atrocities.

British human rights campaigners seized on the mountain of documents – posted on the whistle-blowing website Wikileaks – to demand a public inquiry to be held in the UK into the alleged mistreatment of Iraqis whilst in UK custody.

The secret logs detail incidents during the war and subsequent occupation of Iraq from 2004 until 2009. They reveal how British troops were subject to several incidents of ‘friendly fire’ by US troops; how Iran sponsored the Shia insurgency attacks in Iraq and designed suicide vests for al-Qaeda bombers. The leaked logs also contain alleged evidence of 15,000 previously unknown civilian deaths.

The greatest controversy will be over the apparent complicity of the American forces in covering up the widespread and brutal torture of Iraqi civilians.

A senior United Nations official said there should now be an investigation into allegations that US commanders had ignored evidence of widespread abuse by Iraqi authorities.

Manfred Nowak, the UN’s special rapporteur on torture, said: “There is an obligation to investigate whenever there are credible allegations torture has happened – and these allegations are more than credible – and then it is up to the courts on the one hand to bring the perpetrators to justice and also on the other hand to provide the victims with adequate reparation for the harm they have suffered.”

Phil Shiner, a human rights lawyer, claimed at a Wikileaks press conference held in London on Saturday that a British rifleman had killed an eight-year-old girl playing in the street in Basra. He said: “For some reason the tank stopped at the end of the street, she’s there in her yellow dress, a rifleman pops up and blows her away.”

It later became clear that the allegation did not relate to any information contained in yesterday’s release of documents, although Amnesty International has previously claimed that British forces killed an eight-year-old girl in August 2003.

The field reports appear to show that US authorities failed to investigate hundreds of reports of abuse, torture, rape and murder committed by Iraqi police and soldiers. That failure may be tantamount to a breach of the UN Convention on Torture.

The logs also record 66,081 non-combatant deaths out of a total of 109,000 fatalities – even though the US had always denied keeping a tally of civilian deaths. Iraq Body Count, a London-based group that monitors civilian casualties, claimed to have identified 15,000 previously unknown civilian deaths from evidence contained in the leaked war logs.

Sapna Malik, whose law firm Leigh Day & Co, already represents some 200 Iraqi civilians for human rights abuses, said: “The graphic accounts of abuse that they, or their families, describe are similar to some of the reports in the WikiLeaks disclosure and raise serious questions for the British government to answer.”

The decision by Wikileaks to post the documents on its website – having previously published 92,000 field logs from Afghanistan in July – drew strong criticism from the Ministry of Defence which condemned the leak. “This can put the lives of UK service personnel and those of our allies at risk and make the job of Armed Forces in all theatres of operation more difficult and more dangerous,” said a spokesman.

But Wikileaks’s founder Julian Assange told the news conference: “This disclosure is about the truth. We hope to correct some of that attack on the truth that occurred before the war, during the war, and which has continued on since the war officially concluded.”

The British and American authorities will also brace themselves for further potential embarrassment after Wikileaks used the press conference to announce the planned release of another 15,000 more documents on the war in Afghanistan. The documents had been held back in July because of their sensitive content but have now been fully vetted for release.

The documents published online on Wikileaks detail numerous reports of the torture of detainees by Iraqi authorities. The reports describe prisoners shackled, blindfolded and hung by wrists or ankles and subjected to whipping, punching or kicking. Some received electric shocks.

Some of the details of abuse have emerged as recently as December when US authorities were passed a video showing Iraqi army officers executing a prisoner.

Wikileaks claims the logs also reveal that the coalition had enacted a formal policy of ignoring allegations of torture by Iraqis. Reports are routinely recorded with the words: “no investigation is necessary”. They were then passed on, it is claimed, to the Iraqi forces who were perpetrating the violence.

The logs also show British forces were mistakenly attacked by the US on at least 11 occasions. The log shows a commando with the Royal Marines injured after being shot at by Americans whose vehicle had broken down. On another occasion British soldiers were fired upon at night by US troops who were not equipped with night vision goggles and had been listening to their iPods.

An analysis of the logs suggests Iranian-backed forces supplied insurgents attacking on coalition troops, planned assassinations and even devised new forms of suicide vests for al-Qaeda.

The documents claim Iranian intelligence officers served inside Iraq, at one point manning checkpoints with local militias, and describe a firefight on the border in which American troops shot an Iranian border guard dead.

In one of the most tantalising documents, they also hint at Iranian involvement in al-Qaeda suicide bombings. A threat report in the files dated November 17 2006 claims that new techniques for suicide bombing, a favoured al-Qaeda and Sunni insurgent practice in Iraq, had “surfaced” in Iran and Syria.

Both involved the use of miniature cameras to allow remote monitoring of the attack.

“al-Qaeda remains the strongest organisation among the insurgent groups in Iraq and directs the majority of attacks that take place in Iraq,” says the assessment. “Instructors at the Islamic Jihad Center in Tehran are teaching a new tactic for SVIED (Suicide Vest Improvised Explosive Device) deployment.”