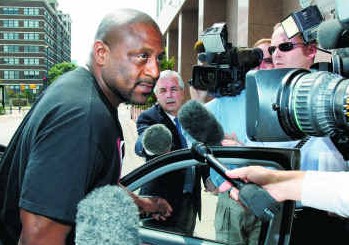 DALLAS—Eugene Lockhart, Jr. was sentenced this week by U.S. District Judge Jorge A. Solis to 54 months in federal prison and ordered to pay approximately $2.4 million in restitution following his guilty plea to one count of conspiracy to commit wire fraud, stemming from his leadership role in a massive mortgage fraud scheme that he and others ran in the Dallas area from approximately 2002 to 2005.

Lockhart, of Carrollton, Texas, is the last of 10 defendants who were convicted in the scheme to be sentenced. Lockhart played for the Dallas Cowboys from 1984 to 1990 and used his name and fame, according to evidence in the case, to get business and further the scheme. Judge Solis ordered that Lockhart, who has been on home confinement, surrender to the Bureau of Prisons on January 16, 2012. U.S. Attorney Sarah R. Saldaña of the Northern District of Texas made the announcement.

Others convicted and sentenced are:

■ William Randolph Tisdale, of Dallas, also considered a leader of the scheme along with Lockhart, was convicted at trial on one count of conspiracy to commit wire fraud and one count of bank fraud. He was sentenced to 10 years in federal prison and ordered to pay approximately $1.1 million in restitution.

■ Hubert Jones, III, of Garland, Texas, who acted as a lieutenant for Tisdale, was convicted on one count of conspiracy to commit wire fraud, one count of bank fraud, and one count of wire fraud. He was sentenced to 58 months in federal prison and ordered to pay $681,545 in restitution.

■ Lendell Beacham, of Desoto, Texas, a mortgage company owner, was convicted on one count of conspiracy to commit wire fraud and one count of wire fraud. He was sentenced to 36 months in federal prison and ordered to pay $947,700 in restitution.

■ Patricia Ortega Suarez, of Dallas, an escrow officer, pleaded guilty to two counts of making a false statement to the U.S. Department of Housing and Urban Development (HUD) and was sentenced to 18 months in federal prison and ordered to pay approximately $1 million in restitution.

■ Michael Anthony Caldwell, of Arlington, Texas, who was a manager for a title company, pleaded guilty to one count of making a false statement to HUD. He was sentenced to one year and one day in federal prison and ordered to pay $445,100 in restitution.

■ Donna Lois Kneeland, of Grand Prairie, Texas, also an escrow officer, pleaded guilty to one count of making a false statement to HUD. She was sentenced to a three-year term of probation and ordered to pay $135,000 in restitution.

■ Bryan J. Moorman, of Mesquite, Texas, who acted as a real estate appraiser, pleaded guilty to one count of wire fraud and was also sentenced to a three-year term of probation. He was also ordered to pay $281,200 in restitution.

■ Jermaine Frederick Frazier, of Desoto, who acted as a loan processor and lieutenant for Lockhart, pleaded guilty to one count of conspiracy to commit wire fraud. He was sentenced to 46 months in federal prison and ordered to pay approximately $2 million in restitution.

■ Scott David Eller, 45, of Mansfield, Texas, a CPA, was convicted on one count of conspiracy to commit wire fraud. He was sentenced to 18 months in federal prison and ordered to pay approximately $1.7 million in restitution.

The defendants ran a scheme in which they located single-family residences for sale in the Dallas area, including distressed and pre-foreclosure properties, and negotiated a sales price with the seller. They created surplus loan proceeds by inflating the sales price to an arbitrary amount substantially more than the fair market value of the residence.

Generally, they recruited individuals to act as nominee or “straw purchasers” or “straw borrowers,” promising to pay them a bonus or commission of between $10,000 and $20,000 for their participation in a particular real estate transaction. The conspirators caused the loan applications for each straw borrower to include false financial information, often including inflated false income figures to conceal the borrower’s true financial condition so that the lender would more likely approve the loan. The conspirators concealed from the lenders the true status, financial conditions, and intentions of the named borrowers, knowing that loans would not likely be approved if the lender knew the true role, credit worthiness, and risk of each straw borrower.

The conspirators falsely represented in loan documents that the straw purchaser intended to use the property as their primary residence, intentionally concealing from the lender that each straw borrower viewed himself as an “investor,” who never intended to occupy the home.

Some of the conspirators also caused bogus and fraudulent “marketing fees” to be listed on loan closing documents to provide a means for the conspirators to receive surplus/excess loan proceeds.

The scope of the conspiracy involved approximately 54 fraudulent residential property loan closings resulting in the funding of approximately $20.5 million in fraudulent loans. The actual loss to lenders is nearly $3 million.

Today’s announcement is part of efforts underway by President Obama’s Financial Fraud Enforcement Task Force (FFETF) which was created in November 2009 to wage an aggressive, coordinated, and proactive effort to investigate and prosecute financial crimes. With more than 20 federal agencies, 94 U.S. attorneys’ offices, and state and local partners, it is the broadest coalition of law enforcement, investigatory, and regulatory agencies ever assembled to combat fraud. Since its formation, the task force has made great strides in facilitating increased investigation and prosecution of financial crimes; enhancing coordination and cooperation among federal, state, and local authorities; addressing discrimination in the lending and financial markets and conducting outreach to the public, victims, financial institutions, and other organizations. Over the past three fiscal years, the Justice Department has filed more than 10,000 financial fraud cases against nearly 15,000 defendants, including more than 2,700 mortgage fraud defendants. For more information on the task force, visit www.stopfraud.gov.