“Whose blood will spill, whose heart will break?

Who’ll be the last to die for a mistake? 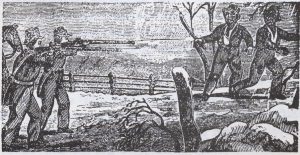 And once again: Why?

It’s the question we always find ourselves asking in moments like this, the understanding we always seek as bodies lay strewn and the air is rent by shrieks of mourning.

But for all that, the answer is no mystery.

As is so often the case with America’s miseries, if you seek the origin story, if you follow the twisted roots back to the beginning, you will find people who were desperate to guard the ramparts of white supremacy.

For instance, as historian Kevin M. Kruse points out in “The 1619 Project,” we sit in traffic gridlock because suburban voters routinely reject mass transit measures for fear their distant enclaves might become more accessible to people of color from the city centers.

So when you survey last week’s too familiar carnage in Uvalde, Texas, — two teachers and 19 children slain at an elementary school by a demented teenager with an AR-15 — it is, yes, fair to indict the tattered mental-health system, the craven politicians, the greedy gun industry and the American firearms fetish that enabled it.

But don’t forget the Founders, who, as historian Carol Anderson shows in her book, “The Second,” were essentially held hostage by Southern states that refused to join the new country unless it guaranteed their militias would not be disarmed.

See, they depended on those militias to protect against uprisings by enslaved Africans.

Thus was born the Second Amendment enshrining “the right to keep and bear arms.”

You’d hope the rest of us had some rights, too — our children, especially.

The right to swing on play-yard swings.

The right to come home safely from school.

The right to grow up.

But this is America, so the “right” of an 18-year-old kid to own an AR-15 supersedes all that.

The song quoted above was inspired by something Navy Lt. John Kerry said in 1971 Senate testimony about the Vietnam War.

By then, most Americans had concluded that war was a grievous blunder. But the government still refused to admit what was obvious to the people.

In other words, once you know it’s crazy, how can you allow people to go on dying for it?

The question resonates far beyond its original context.

Yet the craziness persists.

We remain a country where an 18-year-old may legally buy a weapon of war while the right spouts platitudes and harebrained ideas — Texas Sen. Ted Cruz thinks schools should have only one door — while ignoring that what happened in Uvalde, what will absolutely happen soon in some other town, only happens here.

Some day it will end. Some day, it has to.

Some day, surely, even conservatives must finally face the obvious: This is insane.

You think it’s hard asking a man to be the last to die for what you know is wrong?