The True Impact of Violence On Childhood? Why Every American Ought To See The Paintings Of Gottfried Helnwein

In the past 16 years, of all the school and mass shooting massacres around the world, 77 percent have occurred in the U.S. Every year, 30,000 people in America are murdered with guns. The slaughter traumatized anyone with nerve endings.

Why is it that a democratic sanctuary -- one graced by culture, learning and privilege -- is the world's ranking hellhole of berserker violence? Because America is not a democratic nation, but a right-wing plutocracy that has risen on a foundation of  "conservative values" -- foreign invasions, plunder, mass murder, war crimes, exploitation of labor, executive greed, homelessness, cultural stupidity, street-corner drugs, a controlled propaganda press, the politics of corruption and deceit, pro-military perception management ("our heroes"), assault weapons on the streets. ... Is it any wonder that the most mentally unstable snap and act out?

Gun control  won't stop it. The gun-powder genie is out of the bottle. The nation needs a good, long period of  honest self-appraisal. Fascism, euphemized as "conservatism" since the day of Goldwater and Nixon, is the overriding problem. Face it or continue to live on a bullet-ridden pile of bodies, the true "City on the Hill." Rename the country: "Newtown." Then go back to watching Bill O'Reilly, listening to belly-button pop music, soaking up National Review state propaganda, and reading newspapers to keep up with the latest mass killings. Why change? We are the (bullet-spewing) champions of the world  ... 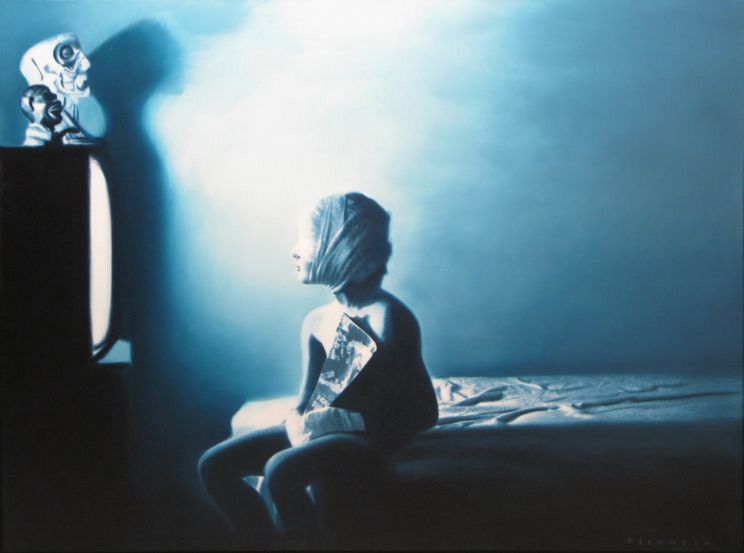 The True Impact of Violence On Childhood?

Why Every American Ought To See The Paintings Of Gottfried Helnwein

Two days after the Sandy Hook school massacre, a survival gear company called Black Dragon Tactical composed a new slogan to promote sales of armored backpack inserts. “Arm the teachers,” the company declared on Facebook. “In the meantime, bulletproof the kids.” While few people have been so blunt, it was a typically American reaction, essentially a reprise of our response to 9/11: Prevent future bloodshed by bolstering firepower and hardening targets. There are myriad reasons, widely discussed, why neither of these strategies is likely to save kids’ lives. Yet a deeper question often goes unaddressed: Are our efforts to protect children killing off childhood?

The question may be political, but the keenest response is to be found in a museum in Mexico City, the Museo Nacional de San Carlos, at a retrospective of paintings and photographs by the Austrian-American artist Gottfried Helnwein. Helnwein’s extraordinary work depicts the fragile innocence of children. Devoid of grown-up sentimentalism, his images can be overwhelming, especially those that show how that innocence falters in an adult world.

Helnwein censors nothing. Many of his early pictures, painted in Vienna when Holocaust denial was common, show children maimed by Nazi doctors, inexplicably bandaged or bleeding. His recent works are even more harrowing, capturing the psychological violence permeating our own age. For instance, in the 2007 painting Untitled (The Disasters of War 24), a boy turns a gun on a manga girl. His face is wrapped with bandages, obscuring his eyes, yet the cock of his head and the turn of his mouth evoke burgeoning cynicism. Victimhood has made the boy turn on his imagination. His powerlessness against his tormentors, whoever they are, has driven him to inflict revenge on the only figure over whom he has power, this imaginary companion who will vanish as he pulls the trigger.

What is so horrifying about Helnwein’s painting is that the innocence of this boy – the source of the child’s innermost invincibility – appears to have been irreparably ruptured. The implication is unavoidable, and reverberates through much of Helnwein’s recent work: Our contemporary culture of violence, and the attendant efforts to protect lives by force, victimizes children from within.

While children can endure this environment, their childhood cannot. Like innocence itself, the transition is invisible. In Helnwein’s masterful artwork, we perceive the loss.