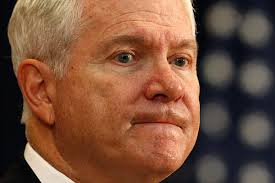 Current Starbucks Director Robert Gates — former Secretary of Defense and DCI (1991-1993) — was involved in the Iran-Contra scandal. He is considered the “father” of Al Qaeda, and organized the Arab Legion, a young Al Qaeda faction, in Afghanistan during its war with the Soviets.

“Bombing of Unprotected Cities. Under Gates, the United States has regularly bombed Iraqi cities under our protection. It has routinely bombed households in Afghanistan and, separately, Pakistan, often based on claims of informants and not actual forces engaged in combat against those positions. As a result large numbers of civilians who we are required to protect died. These military actions are war crimes. Because Gates is second in the Chain of Command, and because he had failed to issue appropriate orders to prevent them, he is responsible for what has happened.”

Daniel Ellsberg: “Amazingly enough, [Robert] Gates and [Leon] Panetta, two of Obama’s defense secretaries, both in a panel just last week, criticized their former boss [Obama] very strongly. For what? That he went to Congress [about Syria]. That he obeyed the Constitution, which gives the power, the decision on war, exclusively to Congress. … “

Ex-Defense Secretary Robert Gates to be next Boy Scouts president

The Boy Scouts of America on Wednesday chose former U.S. Secretary of Defense and CIA director Robert Gates as its next president, who will face the task of repairing divisions in the organization from a heated debate over accepting gay scouts.

As Defense Secretary, Gates supported President Barack Obama’s withdrawal of the “Don’t Ask, Don’t Tell” policy that prevented gays and lesbians from serving openly in the military. Congress repealed the ban in 2010 and it was lifted in 2011.

While a Boy Scout, Gates achieved the highest honor of Eagle Scout. He was due to begin his two-year term in May 2014.

Gates will succeed Wayne Perry, who led the scouting organization through the emotionally charged debate in May when the council voted to lift a century-old ban on openly gay scouts. …

Gates, 70, served in various roles in the CIA including head of the intelligence agency from 1991 to 1993.

President George W. Bush appointed him defense secretary in 2006 and he was retained by Obama, making him the only defense secretary to be asked to remain in office by a newly elected president, according to the Department of Defense.

He has also served as president of Texas A&M University.