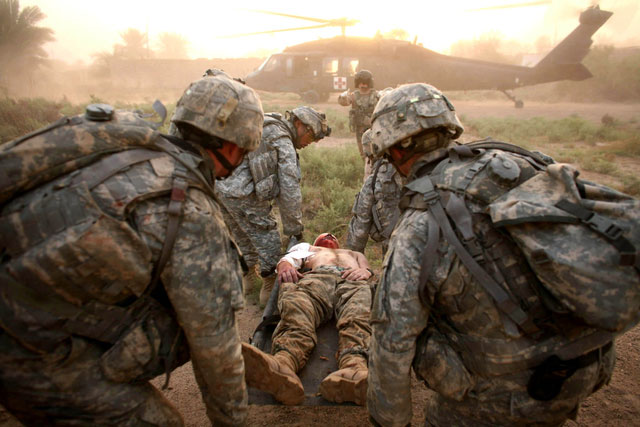 The official inquiry into the Iraq war being held in London has been accused of ignoring the deaths of the estimated 100,000 Iraqi civilians who have been killed since the 2003 invasion.

Iraq Body Count (IBC) has recorded up to 106,000 civilian deaths since the allied invasion.

The organisation said the equivalent of an Iraq war inquest was needed because the Chilcot inquiry set up by the former UK prime minister Gordon Brown had failed to address the issue.

For the past 12 months, the IBC, which is based in Britain, has been pressing the inquiry chairman to look into civilian casualties.

In its view, the inquiry has been fixated upon the interplay between military and political actors in the UK and the US.

The Chilcot panel will visit Iraq before finalising its report by the end of the year.

Seven years after they arrived, the last U.S. combat troops leave Iraq. But 50 ,000 American soldiers remain to ‘advise and assist’ until New Year’s Eve, 2011. And then? ‘We kick off their training wheels,’ said a US officer.

What’s been achieved? Saddam was caught and hanged, but the purported reason for the invasion  –  his weapons of mass destruction  –  never existed.

Bombs kill scores and maim hundreds in crowded places. Assassinations have become routine. Five months after parliamentary elections, no government has yet been formed. It’s an understatement to say the atmosphere is tense.

Iraqis seem worse off now than they were under Saddam. Who’s to blame?

If the invasion and destruction of Iraq had been planned and executed by a Third World leader, wouldn’t he be facing an international trial?

The former leader of Liberia, Charles Taylor, is still being tried  –  at the International Court at The Hague  –  by the Special Court for Sierra Leone, established in 2002 by the UN and the Government of Sierra Leone.  Its purpose is to find out who bears the greatest responsibility ‘for war crimes, crimes against humanity and other serious violations of international law’ committed in Sierra Leone.

Doesn’t the 2003 invasion of Iraq and its aftermath involve war crimes, crimes against humanity and serious violations of international law?

Wasn’t it illegal? The architects of the Iraq invasion  –  George W. Bush and Tony Blair  –  are apparently immune from prosecution, even though they conspired to avoid seeking a tricky UN resolution backing the war and produced dud dossiers on Saddam’s non-existent WMDs. They have the full protection of their nations while enjoying prosperous retirements.

On September 1, Blair will publish a memoir, A Journey, which is said to be a love letter to his ‘highly intelligent’ and ‘visionary friend’ George W. Bush. Yesterday, it was reported that Blair has now established his own investment bank.

Meanwhile, Bush’s stock rises in America as the reputation of his successor, Barack Obama, diminishes. He and wife Laura have books coming out.

It’s true we have the ongoing Iraq Inquiry, chaired by Sir John Chilcot, but it’s hardly a war crimes trial.

Chilcot described its modest purpose thus: ‘We will be considering the UK’s involvement in Iraq, including the way decisions were made and actions taken, to establish, as accurately as possible, what happened and to identify the lessons that can be learned.’

If David Cameron is still premier when Chilcot reports, will he order the arrest of Tony Blair? Of course not. Cameron was as gung-ho as Blair over Iraq.

What if Chilcot finds the Blair Government did fiddle the facts in order to justify invasion? It won’t make any difference.

Any lessons learned by the Chilcot team will be ignored. Indeed, no undertaking has been given to consider any lessons. Liberal Democrat leader nick Clegg opposes the war but he can be safely ignored.

No American leader has ever been prosecuted abroad for war crimes  –  not even President Harry Truman after he dropped atomic bombs on Japan. The same goes for Britain and our own misdeeds.

We’re covered by America’s immunity, the immunity of the strongest. We can put the leaders of lesser nations on trial for war crimes but never face the same fate our selves . Aren’ t we fortunate?