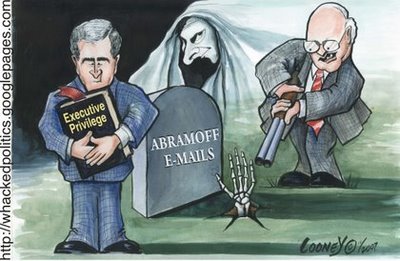 [JURIST] The Bush administration is invoking a secrecy defense known as Glomarization [DOJ backgrounder] to avoid disclosing hundreds of documents concerning White House visits by former lobbyist Jack Abramoff [JURIST news archive], according to AP citing court papers filed Friday. The administration is relying on a 1976 US Supreme Court ruling in Phillippi v. CIA, a case which arose in the context of inquiries concerning an alleged CIA connection with the Glomar Explorer, Howard Hughes' submarine retrieval ship. Phillippi established the right of government agencies to flatly deny the existence of records pertaining to investigations, if acknowledging the existence of the records would, in itself, reveal exempt information. The Department of Justice claims in the Abramoff case that releasing the requested information would reveal sensitive information about Secret Service's protective function. The administration's denial comes despite a promise last year to produce all records concerning Abramoff.

In October, US House Oversight and Government Reform Committee [official website] Chairman Henry Waxman (D-CA) called on the White House to disclose hundreds of documents [JURIST report] relating to Abramoff. Abramoff pleaded guilty [JURIST report] in January 2006 to two conspiracy and fraud charges stemming from the 2000 purchase of the SunCruz Casino [corporate website] as part of a plea agreement [PDF text] with federal prosecutors that would reduce his punishment in exchange for favorable testimony in future DOJ corruption cases.
••••••••••
Secrecy Invoked on Abramoff Lawsuits
Dec 2, 3:43 AM (ET)
By PETE YOST

WASHINGTON (AP) - The Bush administration is laying out a new secrecy defense in an effort to end a court battle about the White House visits of now-imprisoned lobbyist Jack Abramoff.

The administration agreed last year to produce all responsive records about the visits "without redactions or claims of exemption," according to a court order.

But in a court filing Friday night, administration lawyers said that the Secret Service has identified a category of highly sensitive documents that might contain information sought in a lawsuit about Abramoff's trips to the White House.

The Justice Department, citing a Cold War-era court ruling, declared that the contents of the "Sensitive Security Records" cannot be publicly revealed even though they could show whether Abramoff made more visits to the White House than those already acknowledged.

"The simple act of doing so ... would reveal sensitive information about the methods used by the Secret Service to carry out its protective function," the Justice Department argued.

"This is an extraordinary development and it raises the specter that there were additional contacts with President Bush or other high White House officials that have yet to be disclosed," said Tom Fitton, president of Judicial Watch, a conservative watchdog group that filed the suit. "We've alleged that the government has committed misconduct in this litigation and frankly this is more fuel for that fire."

A response by White House spokesman Trey Bohn referred to the Secret Service, saying, "We have nothing to add to the USSS. position as stated in the court filing."

Sensitive Security Records are created in the course of conducting more extensive background checks on certain visitors to the White House. In sworn statements accompanying the filing, two Secret Service officers said the extra attention is paid to some visitors because of their background, "the circumstances of the visits" or both.

The Sensitive Security Records were discovered in the course of another lawsuit seeking similar records, the court papers state.

On Friday, the Justice Department asked for a consolidation of the two cases. Such a move would take the CREW case from U.S. District Judge Royce Lamberth and give it to Judge Rosemary M. Collyer, an appointee of the current president who is hearing the Judicial Watch case. Lamberth, a federal judge for two decades, has taken both Republican and Democratic administrations to task during his tenure.

To date, the government has turned over Secret Service records referring to seven White House visits by Abramoff - six of them in the early months of the Bush administration in 2001 and the seventh in early 2004 just before Abramoff came under criminal investigation.

The White House has released little information about the visits, but none of them appears to involve a small group meeting with President Bush.

Nearly two years ago, just after Abramoff had pleaded guilty in the influence peddling scandal, Bush told reporters, "I can't say I didn't ever meet" Abramoff, "but I meet a lot of people."

"I don't know him," Bush said at the presidential news conference in January 2006. "I've never sat down with him and had a discussion with the guy."

After Bush's comments, Abramoff wrote an e-mail to the national editor of Washingtonian magazine saying that Bush had seen him "in almost a dozen settings, and joked with me about a bunch of things, including details of my kids. Perhaps he has forgotten everything, who knows."

Time magazine reported that its reporters had been shown five photographs of Bush and Abramoff. Most of them, the magazine said, had "the formal look of photos taken at presidential receptions."

In an attempt to bolster its case, the Justice Department is citing a lawsuit on a secret operation of the Cold War, the attempted raising of a sunken Soviet submarine. In a 1976 ruling, the U.S. Court of Appeals for the District of Columbia Circuit allowed the CIA to refuse to confirm or deny its ties to Howard Hughes' submarine retrieval ship, the Glomar Explorer.

"A refusal to either confirm or deny the existence of responsive records is a well-recognized and accepted response in circumstances such as these," the Bush administration's court filing states.

Abramoff is serving six years in prison on a criminal case out of Florida. He has not yet been sentenced on charges of mail fraud, conspiracy and tax evasion stemming from the influence-peddling scandal in Washington.
•••
On the Net:

The Bush administration's top federal procurement official resigned Friday and was arrested yesterday, accused of lying and obstructing a criminal investigation into Republican lobbyist Jack Abramoff's dealings with the federal government. It was the first criminal complaint filed against a government official in the ongoing corruption probe related to Abramoff's activities in Washington. ...