Arabs were inimical to Jews well before Goering's  propaganda  reached the Middle East. So what effect did Nazi hate mongering have on Islam? 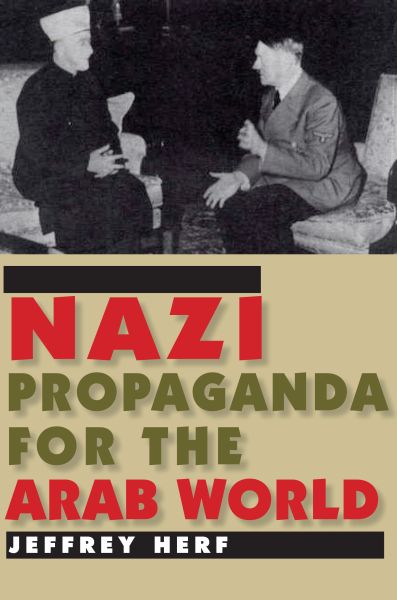 " ... The facts [Herf] has dug up do no credit to the propagandists or their Arab collaborators. But there were very few of the latter and there was no great jihadist uprising against the British or even any significant acts of sabotage. ... "

Nazi Propaganda for the Arab World, By Jeffrey Herf

Although Jeffrey Herf's book mostly chronicles German radio broadcasts to the Arab world during the Second World War, it also covers German propaganda directed at Turkey and Iran, as well as Italian propaganda to the Arabs. In addition he pays a lot of attention to the activities of the notorious Palestinian leader, Haj Amin el-Husseini, the Grand Mufti of Jerusalem.

Husseini fled British-mandated Palestine and found refuge in Iraq while it was briefly controlled by a pro-Axis regime in 1941, before he ended up in Germany. He was received by Hitler and Ribbentrop, exchanged evil banalities with them, advised on anti-British and anti-Jewish propaganda, and had a role in recruiting Muslims, mostly Bosnians, into a special SS division.

Nazi propagandists faced certain difficulties in addressing the Arab world. First, propaganda within Europe had relentlessly stressed the superiority of Aryans over Semites. Hitler's contempt for the Arabs was a matter of record. German officials had a problem persuading Arabs it was really the Jews, rather than the equally Semitic Arabs, that the Nazis despised and hated.

Secondly, although the Nazis wished to attack British imperialism in the Middle East, they could not push the anti-imperial theme too far for fear of offending their allies. Mussolini dreamed of an empire in North Africa and the Vichy French were determined to hang on in Syria and Lebanon.

It was also difficult to stir up anti-American feeling in the Middle East. Hitler thought that his war had to be fought and won primarily in Europe. The high rate of illiteracy in the Arab world meant that printed propaganda was of limited use and not so many Arabs owned shortwave radios. Many of the best Arabists had fled Germany in the course of the 1930s. Finally, Ribbentrop, who as foreign minister was in charge of these activities, did not have Goebbels's flair for propaganda.

On the other hand, the Nazis were preaching to the converted. Egyptians and Palestinians fiercely resented the British imperial presence in their territories. Miles Lampson, the proconsul in Egypt, made no attempt to disguise his contempt for King Farouk and most Egyptian politicians. The British and Russians were treating Iran as a colony. Even more obviously, anti-Zionist propaganda struck a chord with Arabs who feared, quite rightly, that continued Jewish immigration threatened the lives and prosperity of the Palestinians and the future of a Palestinian nation.

Also, Jews in Algeria and Morocco mostly collaborated with Vichy colonial authorities. Moreover, though Herf rather underplays this, there was a tradition of anti-Jewish sentiment in the Islamic world that went back to the seventh century and accounts of the Prophet's dealings with the Qurayzah Jews in Medina. Even some tales added to 17th- and 18th-century manuscripts of The Arabian Nights contain foul anti-Semitic slanders. This sort of anti-Semitism persists in some Muslim circles. Ten years ago I purchased a copy of The Protocols of the Elders of Zion in an Islamist bookshop in Westbourne Grove. The book had been printed by the Scientific Research House in Kuwait.

The Nazis, encouraged by Arab readiness to believe the worst of the Jews, considered presenting Hitler as the Mahdi before regretfully concluding that this was impossible as he did not belong to the Prophet's tribe, the Quraysh. Himmler was disappointed to find that the Qur'an did not predict Hitler's ultimate victory.

Nazi propaganda, narrowly focused as it was on anti-imperialism and anti-Zionism, was repetitive. Since Herf's book follows the content of the broadcasts quite closely, it too is repetitive. The facts he has dug up do no credit to the propagandists or their Arab collaborators. But there were very few of the latter and there was no great jihadist uprising against the British or even any significant acts of sabotage.

In a final chapter, Herf considers the possible influence of Nazi propaganda on post-war Islamist ideology and at this point his book becomes contentious and speculative. Of Sayyid Qutb, author of an immensely influential commentary on the Qur'an, as well as radical Islamist treatises, Herf writes: "It is plausible that Qutb listened to Nazi broadcasts". Well yes, but it is a matter of record that what turned him into a fundamentalist was his trip to America in 1949-50 and his perception of the moral decay he found there, as well as the anti-Arab prejudice he encountered.

Herf believes that Nazi thinking exercised an important influence on the Muslim Brotherhood in Egypt. But the Brotherhood's founder, Hassan al-Banna, seems to have owed far more to his reading the Qur'an and the Islamic modernist Rashid Rida, as well as his disgust at the incompetent way Arab regimes had conducted the war against Israel in 1948. Neither Qutb nor al-Banna needed special tuition from the Nazis. Herf has no Arabic and this has prevented him from accurately assessing the impact of Nazi propaganda during and after the war. Finally, it was of course no part of Herf's brief to cover the Zionist Stern Gang's secret negotiations with the Nazis, or the terrorism conducted by Irgun against the British in Palestine throughout the war.

Robert Irwin's 'For Lust of Knowing: the Orientalists and Their Enemies' is published by Penguin