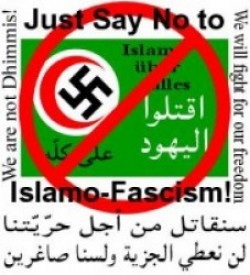 “Islamo-Fascism” is a gross exaggeration that conceals the true source of global terrorism, a tool of domestic intelligence agencies, not of Islamic origin. Dave Emory, Daniel Hopsicker, Joe Trento, Peter Dale Scott and other researchers who promote the concept are in bed with handlers who feed them disinformation and slanted reports on terrorism, and in return provide flattery, sex and money. This gambit began before 9/11, when someone at the CIA had the bright idea to turn the research community into a propaganda front for the “Big Event.” I was also brought into the game – and dropped it as soon as I realized that we were being manipulated. Most of the researchers compromised are still beating the “Islamo-Fascist” drum and turning out bogus work that scapegoats the Saudis, ala Hopsicker and Emory, who are merely conveying the same message as David Horowitz, repackaged to render it palatable to “conspiracy theorists.” Anyone blaming 9/11 on “Islamo-Fascists” is an agent of the Bush administration, willingly or unconsciously, and should be challenged. – AC

This October 22-26, America’s fascists will attempt to make a further major step in this repressive process. They have declared an “Islamo-Fascism Awareness Week.” They are planning programs and protests at over 100 campuses, supposedly against the oppression of women under Islam and “the threat posed by the Islamic crusade against the West.” In fact, their aim is to rally people behind the U.S. “crusade” against the people of the world and to shut down dissent against this crusade on the campus and, by extension, more broadly throughout society.

There is an ice sheet spreading across the campuses of America. Well-known professors have lost their jobs due to their political views. Scores, perhaps hundreds, of other professors, less well-known, have been fired, denied tenure, harassed and silenced. Critical thinking is under assault; the universities are being transformed into uncontested centers of indoctrination.

This October 22-26, America’s fascists will attempt to make a further major step in this repressive process. They have declared an “Islamo-Fascism Awareness Week.” They are planning programs and protests at over 100 campuses, supposedly against the oppression of women under Islam and “the threat posed by the Islamic crusade against the West.” In fact, their aim is to rally people behind the U.S. “crusade” against the people of the world and to shut down dissent against this crusade on the campus and, by extension, more broadly throughout society. Coming as it does at the time of continued escalation of the Iraq war and the distinct possibility of war against Iran, the danger of this cannot be underestimated. A particular objective of “Islamo-Fascism Awareness Week” is to whip up reactionary sentiment and hysteria on campuses, and to provide a rallying point to further organize a fascist student movement – spreading racism, chauvinism, and intellectual conformity to reaction; hounding progressive professors and student organizations; and creating a more repressive climate on campus.

This must be confronted and opposed on every campus where it rears its head. Indeed, all people who care anything about critical thinking and academic freedom and about the issues of war, repression, racism and the oppression of women must rally together, and seek out, confront and put this whole effort on the political defensive. Horowitz’s project has to be opposed and taken as an opportunity to raise awareness of the growing danger of U.S. fascism and the reality of the fascist direction and measures being taken by those in the highest reaches of power.

What Is “Islamo-Fascism Awareness Week”?

Go online to revcom.us for more articles exposing David Horowitz, and on the fight to defend dissent and critical thinking on campuses. And watch the pages of Revolution newspaper and check revcom.us for more information leading up to the “Islamo-Fascism Awareness Week.”

The very term “Islamo-Fascism Awareness Week” is an attempt to frame discussion and debate in a way that forces people to choose between U.S. imperialism’s bloody crusade on the one hand, or Islamic fundamentalism on the other. Posing these as the only choices traps people in a deadly framework and logic. It ends up strengthening both of these reactionary forces, when neither represents liberation for the people.

Islamic fundamentalism is a reactionary force. Like other brands of religious literalism, it is a program full of oppressive and outmoded content: patriarchy, bigotry, religious warfare and the all-round promotion of superstition and ignorance.

But the U.S. is the far, far more aggressive, and dangerous reactionary force in the world. And those who live inside the U.S. have the particular responsibility to oppose this power. What is needed right now, on campuses and around the country (and the world) is to bring forward a movement, and critical thinking that opposes the crimes of U.S. imperialism, and, in the process, brings forward a whole different alternative—both in the imperialist countries and in the nations oppressed by imperialism.

Horowitz is threatening sit-ins against Women’s Studies departments “to protest their silence about the oppression of women in Islam.” Coming from someone who does not only support, but helps strategize with the Bush regime, this is grotesque, galling and shameless hypocrisy. This regime has taken major steps to ban not just abortion but birth control as well. And the Bush regime, and Horowitz himself, is deeply connected to their own brand of reactionary, theocratic religion: the Christian Fascist movement, which commands women to subordinate themselves to their husbands and to see their main role as breeders of children, and which has committed violence and murder against abortion providers.

Horowitz is threatening to go after “the anti-American curriculum of the tenured left” and to “teach an alternative curriculum that will arm America against the radical Jihad.” In fact, Horowitz has already led attacks on professors like Ward Churchill, known mainly for his work on exposing the U.S. genocide against Native Americans, and Norman Finkelstein, known mainly for his exposure of Israel’s crimes and its hypocritical use of the Nazi Holocaust of the Jews to justify those crimes. He has published a book listing 101 “dangerous professors”—almost all of whom research and teach about the real nature of American society and whose work and views don’t “fit into” the crusade now being carried out by the U.S. government.

He is branding the Muslim Student Associations as “the enemy,” and is aiming to stir up hatred and suppression against these students. He is going after the environmentalists for supposedly raising too much concern over global warming in a way that Horowitz feels detracts from the so-called “war on terror.”

If this goes down unopposed, it will be very bad—it will mark a major new degree of chill on the ice age now descending on the universities. Instead, something different must emerge. This “week” must be confronted and opposed, and out of that must emerge a greatly heightened understanding of, and resistance to, the real fascist danger in this society.

People need to prepare to plunge into the coming controversy, seeking out these fascists and confronting them with the real facts and the truth, and in the process winning over many others. Students must step forward now, on every campus, and organize to politically confront and expose Horowitz’ campus fascists—and to change the tone and tenor on these campuses, unleashing ferment and activism, and organized resistance.

Horowitz is a self-described “battering ram” against any thinking in academia that challenges a whole range of lies this system has perpetrated. As the accompanying article points out, he’s played a major role in slandering, hounding, and even ending the careers of progressive teachers.

Horowitz established his credentials with the ruling class by renouncing his involvement in the 1960s movements for social change in a series of slanderous articles, books and conferences. He “made his bones” in the ’90s, by waging a high-profile campaign against reparations for African-Americans, with the theme that Black people should be grateful for slavery! Horowitz took out huge ads in campus newspapers proclaiming this vicious lie and to this day makes it a major part of his attack.

He wrote a book on the “art of political war” that Karl Rove distributed to key Republican campaign operatives. He is a vitriolic defender of everything from the extermination of the Native Americans and the enslavement of Black people, to the savage and criminal wars against Iraq and Afghanistan and the torture of those whom this regime deems to be terrorists. He has set up a website that clamors for the arrest and imprisonment of revolutionaries, radicals, dissenters and liberals and reports every slander, rumor, lie and innuendo that comes his way. And, bankrolled from the ruling class, he has organized the falsely named “Students for Academic Freedom,” which literally takes notes on lectures and rips things out of context in an attempt to get professors who do not sufficiently bow down to the Bush agenda fired. The modern-day Nazi-type student groups inspired by Horowitz organize so-called “games” like “Catch an Illegal Immigrant” on campus.

In short, Horowitz defends every crime that this system has ever committed and is now preparing to justify even more, and to intimidate and silence any who would question or resist this.

Conservative My Ass—These People Are Nazis!

U. Maryland Historian Jeffrey Herf Speech on Nazi Propaganda in the Arab World
Mar 07
OpEd: Why Opposition to David Horowitzs’ Hate Speech is Not About the First Amendment
Nov 19

U. Maryland Historian Jeffrey Herf Speech on Nazi Propaganda in the Arab World
OpEd: Why Opposition to David Horowitzs’ Hate Speech is Not About the First Amendment