Anti Semitism » Glenn Beck and the Echoes of Charles Coughlin

"... The more one digs, the more disturbing the Beck-Coughlin comparison becomes. But what happened to Coughlin? Eventually, he fell from grace after his antisemitism and anti-Franklin D Roosevelt rhetoric became unpopular after the second world war broke out. Some of his supporters became violent, and the public turned against them and him. He lost his radio show and his newspaper. He went back to where he had begun: as a small-time parish priest. ..."

What do we learn from parallels drawn between a demagogic Catholic priest of the 1930s and the Fox News host? 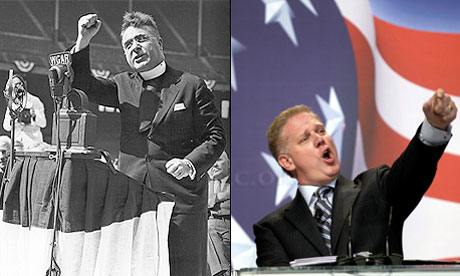 Father Charles Coughlin, in about 1930, and Glenn Beck, addressing the Conservative Political Action Committee in 2010.

His radio show drew millions of listeners. His global conspiracy theories outraged some, but drew many others to his paranoid rantings. He dubbed the American president a communist sympathiser and supported a grassroots conservative political movement aimed at overthrowing two-party politics. He made statements that horrified Jewish groups.

This is Glenn Beck, right?

It certainly sounds like the controversial Fox News star. After all, he lambasts Barack Obama as a dangerous Marxist; his pronouncements on Nazis have caused a coalition of 400 rabbis to advertise against him in the Wall Street Journal; and his penchant for anti-America conspiracy theories on everything from Fema to George Soros knows no bounds.

But it is not Beck. It is, in fact, a description of Father Charles Coughlin, the infamous rightwing "radio priest", whose broadcasts in the 1930s disturbingly echo those of Beck today. Indeed, some experts see Coughlin as a father figure to the extremist broadcasting Beck has honed so well. Many commentators on the left, including in Harper's Magazine and the Columbia Journalism Review, have drawn a parallel between our own troubled times with Beck and the tumultuous 1930s that saw the rise of fascism and Coughlin.

You can see their point. Coughlin, a small-time Roman Catholic priest from Michigan whose radio show turned him into a national power-player, developed a mass audience estimated to have been 40 million-strong at its peak. His church opened its own post office to cope with fanmail. Coughlin used demagoguery to promote his views, which blended the extremes of left and right into a sort of conservative populism.

He co-founded a third political party and supported conservative activists aiming to save America from itself by force of arms. He carefully cultivated an image of the average Joe as an outraged patriot who believes in God and country and America first. Beck's 2011 version runs similar. He may live in a vast mansion and run a multimillion-dollar business, but he claims to represent the man-in-the-street. He has promoted the Tea Party movement and has wide support among its members. Like Coughlin, he sees conspiracy everywhere and is convinced the American way of life is on the edge of ruin, led there by a communist-sympathising president.

Beck, and his defenders, are aware of the comparison and they scoff at it. They point out, rightly, that Coughlin actually advocated many things Beck never would. Coughlin's populism had a streak of Catholic social justice. He railed against the excesses of capitalism and wanted government control of certain national assets. He made fighting poverty and joblessness a central part of his rabble-rousing.

Beck rarely does this. Indeed, he has slammed "99ers" (people so-called because they have been out of work for 99 weeks or more) as lazy socialists. Which means that Beck's defence against being compared to Coughlin is that the notorious fascist-sympathising priest was too leftwing and soft on the poor.

But there is another defence, too. As the 1930s progressed, Coughlin's rantings took on a stridently antisemitic bent. He became an open supporter of some Nazi actions against Jews. Beck, obviously, has not done this. There is no evidence anywhere that Beck has made a clearly anti-Jewish statement. He is a supporter of Israel. Jewish groups have gone after him because they are offended by his repeated use of the term Nazi to describe liberals, not because he has made any antisemitic statesments. So, on that point at least, Beck is surely not Coughlin.

Yet, it may not be as simple as that. When you look at the way Beck has demonised someone like Soros, his methodology (if not his content) is straight from the antisemitic playbook. He paints a picture of a sinister international cabal plotting the downfall of America – a concept popular with those who think the Protocols of the Elders of Zion are real. Beck also did one show called the "Big Lie", which identified numerous people as enemies of freedom. Of nine people given prominence in the show, eight of them were Jewish: ranging from New York academic Frances Fox Piven to Sigmund Freud (and, naturally, Soros). Beck, of course, never mentions their ethnicity.

So, the more one digs, the more disturbing the Beck-Coughlin comparison becomes. But what happened to Coughlin? Eventually, he fell from grace after his antisemitism and anti-Franklin D Roosevelt rhetoric became unpopular after the second world war broke out. Some of his supporters became violent, and the public turned against them and him. He lost his radio show and his newspaper. He went back to where he had begun: as a small-time parish priest.

Coughlin ended up a historic relic of a distressing period and a sideshow in the American story, not a main character in the narrative. It would be good if, one day, we could look back and say the same about Beck. Only time will tell.