Anti Semitism » Introduction to the Institute for Historical Review 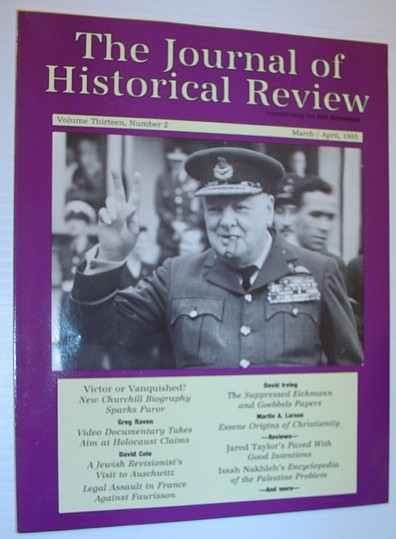 Leadership: Willis Carto has been a major figure on the American radical right since the 1950s, when he set up his anti-Semitic Liberty Lobby with offices not far from the White House. Although at one time he had access to leading politicians, Carto eventually became infamous for his pro-Nazi and rabidly anti-Jewish views and lost those connections.

Founded in 1978 by Willis Carto, a longtime anti-Semite, the Institute for Historical Review (IHR) is a pseudo-academic organization that claims to seek "truth and accuracy in history," but whose real purpose is to promote Holocaust denial and defend Nazism. Once a prominent voice in extremist circles, the IHR has been on the decline, unable to publish its anti-Semitic Journal of Historical Review or sponsor major international Holocaust denial conferences since 2004. The organization still runs its website, where it peddles extremist books and other materials, and hosts some minor extremist gatherings.

In Its Own Words

"Anyone who is aware of the true situation in Germany during the Third Reich era recognizes that the Crystal Night [the Nazi-orchestrated Kristallnacht pogrom against Jews] episode was quite extraordinary. It was a radical aberration from the normal pattern of daily life. The outburst was not in keeping with either the official National Socialist Jewish policy nor with the general German attitude towards the Jews. The Germans were no more anti-Semitic than any other people." — Ingrid Weckert, "'Crystal Night' 1938: The great anti-German spectacle," Institute for Historical Review website

"On this basis of their similar ideologies about ethnicity and nationhood, National Socialists and Zionists worked together for what each group believed was in its own national interest. As a result, the Hitler government vigorously supported Zionism and Jewish emigration to Palestine from 1933 until 1940-1941, when the Second World War prevented extensive collaboration… . The SS was particularly enthusiastic in its support for Zionism." —Mark Weber, "Zionism and the Third Reich," Institute for Historical Review website

"Although officially Jews have never made up more than five percent of the country's total population, they played a highly disproportionate and probably decisive role in the infant Bolshevik regime, effectively dominating the Soviet government during its early years. Soviet historians, along with most of their colleagues in the West, for decades preferred to ignore this subject. The facts, though, cannot be denied." —Mark Weber, "The Jewish Role in the Bolshevik Revolution and Russia's Early Soviet Regime," Institute for Historical Review website 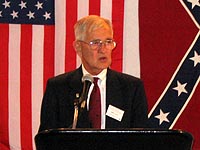 In 1978, Willis Carto, founder and head of the anti-Semitic Liberty Lobby, based in Washington, D.C., spun off a new organization called the Institute for Historical Review (IHR). It presented itself as a legitimate historical research group, devoted to "revisionism" — a term hijacked from a school of credible historians who offered new interpretations for the origins of World War I. But in fact, it was made up of white supremacists and neo-Nazis, and it would draw expertise from the like-minded around the world. Its mission was to erase the Holocaust by any means at its disposal — including distortion, misquotation and outright falsification.

IHR's first annual conference in 1979 attracted deniers from around the world and helped to introduce some key American extremists to Holocaust denial. David Duke, the neo-Nazi who was then the national leader of the Knights of the Ku Klux Klan, was so taken with the idea that he followed up the conference with a "Special Holocaust Edition" of his Crusader newspaper. In the same way, National Socialist Party of America leader Frank Collin enthusiastically embraced denial, saying, "There was no Holocaust, but they deserve one — and will get it." For years, IHR's yearly conferences were key events that offered networking opportunities for neo-Nazis and anti-Semites from around the world.

A critical contribution by IHR was the pseudo-academic gloss it applied to its anti-Semitism. The group actively tried to avoid blatant anti-Jewish slurs, and instead sought to couch its politics in distortions of history and science meant to sound reasonable. Though the theories that resulted were far out, they had at least the appearance of legitimacy, as did The Journal of Historical Review that the IHR began to publish in 1980. Deniers would claim, for example, that the Anne Frank diary is a fraud because it contained marks made with a postwar ballpoint pen (they didn't mention that the marks were made later by Frank's father, who survived German concentration camps to edit and publish the diary). They would assert that the death-camp ovens were not capable of burning as many bodies as the Allies had said were disposed of after gassing. They lied about the qualities of the Zyklon B gas used to kill Jews, the operation of the Einsatzgruppen (the mobile killing squads which shot to death more than 1 million Jews in Eastern Europe), and hundreds of other facts. Through it all, IHR sought to give the appearance that its writers were honest, if skeptical, students of history.

Throughout the 1980s and early 1990s, IHR hosted conferences that attracted various well-known Holocaust deniers from around the world: Ernst Zündel and John Ball of Canada (Zündel was later deported by Canada to his native Germany); Robert Faurisson of France; Friedrich Berg of Germany; Carlo Mattogno of Italy; and Jürgen Graf and Arthur Vogt of Switzerland. Most notably, David Irving, a writer whose Holocaust denial activities caused a British judge to label him "a right-wing, pro-Nazi polemicist," attended in 1983, and went on to speak before at least four more conferences, in 1989, 1990, 1992, 1994, as well as at numerous other IHR events.

While outwardly thriving during this period, internally there was a power struggle going on for control of IHR. In the mid-1980s, Mark Weber, a former news editor of National Vanguard, a neo-Nazi publication of the National Alliance, began taking a leading role at Willis Carto's IHR. In 1984, Weber began leading the group's annual conferences, and the next year he joined the IHR's editorial advisory committee; in 1992, he took over IHR's The Journal of Historical Review. In 1993, with Weber's support, the IHR board ousted Carto as its leader, accusing him of interfering in editorial decisions. The following May, Carto and his wife tried to retake IHR by occupying its California offices, a situation that led to fistfights and Carto being forcefully removed by the police. Around the same time, another dispute between IHR and Carto broke out, with IHR leaders accusing Carto of diverting some $10 million that was allegedly left to IHR's parent body, the Legion for the Survival of Freedom.

During the decade of litigation that followed, Carto's The Spotlight, the newspaper published by his Liberty Lobby, characterized Weber as a "rat," "cockroach" and "devil," but in the end Weber's side basically won. In 1996, a California court ruled in favor of IHR, saying that Carto owed the Legion for the Survival of Freedom $6.43 million. In 2001, The Spotlight was shut down, although it was rapidly replaced with the look-alike American Free Press, which like its predecessor focused on the alleged evils of "Zionism," wild-eyed conspiracy theories, and wacky alternative health claims. Carto also created The Barnes Review, a new Holocaust denial journal that competed directly with IHR.

While Weber and the IHR won their lawsuits, the fight with Carto proved to be a great distraction for the organization. It could not regularly publish the bimonthly The Journal of Historical Review (no issues were published between April 1996 and May 1997) and it was unable to hold any conferences between 1994 and 2000. IHR did manage to put on a major conference in 2000, with Irving, Zündel, and other notable Holocaust deniers in attendance, but a planned 2001 conference on "Revisionism and Zionism" in Beirut, Lebanon, was cancelled after the host government "would not permit the four-day meeting to take place."

Since then, the IHR has continued to decline. By 2003, it had stopped publishing its journal and its once-large conferences were reduced to mostly small, one-day affairs with a couple of speakers. A major blow came in 2009 when Weber decided to downgrade Holocaust denial in favor of criticizing Jews and Israel. Weber was viciously attacked by several important revisionists, many of whom called for his resignation from IHR. Weber still speaks in public and on radio shows such as "The Political Cesspool," which is run by white nationalist James Edwards of Memphis, Tenn. IHR also still maintains its website and continues to sell extremist books, but it is clearly a shadow of its former self.

Kristallnacht: Before the Glass Began to Break (Re “Jewish Week on (Gay) ‘Sex And Kristallnacht: The Boy Toy (And Boy Assassin) Who Started It All’”)

The Quiet Death Of A Nazi: Martin Sandberger's Last, and Only, Interview