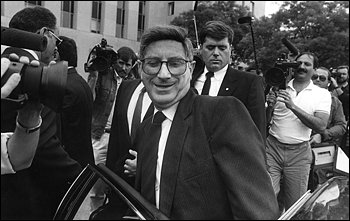 David Kimche, 82, the Israeli spymaster-turned-diplomat who engineered the swap of American hostages in Lebanon for arms to Iran, touching off what became the Iran-contra scandal of the 1980s, died March 8 of brain cancer at his home in Israel.

Mr. Kimche, a top foreign ministry official and former deputy director of Israel's Mossad intelligence service, told U.S. national security adviser Robert C. "Bud" McFarlane in a 1985 meeting that more than a dozen Americans held by the terrorist group Hezbollah in Lebanon could be freed if the U.S. agreed to pick them up.

No strings were attached to the initial offer, but Mr. Kimche's Iranian intermediary soon upped the ante, demanding that the Americans provide 100 antitank missiles in trade for the hostages, who had been individually seized over the previous three years.

Knowing that the U.S. government would not send arms directly to Iran, Mr. Kimche suggested that Israel provide the weapons, as long as the Americans agreed to sell replacement weapons to Israel. President Ronald Reagan agreed, although the one-step-removed deal violated an international embargo. Some of the profits from the subsequent sale to Israel funded anti-Communist rebels in Nicaragua known as the contras, an action that violated a Congressional ban on providing aid to those rebels.

A former soldier in Israel's 1948 war of independence, he was deeply dedicated to the Jewish state and helped direct Israel's revenge by assassination of the Palestinian terrorists who seized and massacred 11 Israeli athletes at the 1972 Munich Olympics.

"The aim was not so much revenge but mainly to make them frightened," he told the London Jewish Chronicle. "We wanted to make them look over their shoulders and feel that we are upon them. And therefore, we tried not to do things by just shooting a guy in the street -- that's easy."

He was key in opening relations between Lebanese Christians and Israel in the 1970s, which provided the groundwork for Israel's invasion of Lebanon in 1982. Later that year, he was Israel's chief delegate at the talks ending that war.

Mr. Kimche's role as an architect of the invasion "destroyed his reputation as a cautious operator," Leon T. Hadar, a former Israeli journalist who is now a Cato Institute research fellow, wrote in a 1991 profile for the Washington Report on Middle East Affairs. "It was Irangate, however . . . that destroyed what was left of the career of Israel's 'sophisticated spy.' "

McFarlane wrote in "Special Trust," his 1994 memoir, that Mr. Kimche in 1985 proposed the assassination of Iranian leader Ayatollah Ruhollah Khomeini, in order to clear the path for a more moderate Iranian faction. McFarlane told the "60 Minutes" television show that Mr. Kimche told them that "there was a way of gradually infusing poison, that [Khomeini] would consume presumably in food." Mr. Kimche denied he suggested such a plot, but McFarlane at the time said the proposal was "clear and unambiguous."

Mr. Kimche was subpoenaed but avoided having to testify before a U.S. federal grand jury about the Iran-contra affair after Israel protested and provided documents about the matter sought by special prosecutor Lawrence E. Walsh. The once-undercover Mr. Kimche was mobbed by the press when he left the courthouse after he was excused from testifying.

Born in London to a Swiss Zionist family whose ancestors included noted rabbinical scholars, Mr. Kimche immigrated to Palestine in 1946 when he was 18 years old. He graduated from Hebrew University in Jerusalem, where he also received a doctorate. He also studied at the Institute for African and Asian Studies at the Sorbonne in Paris. He co-authored a book, "Both Sides of the Hill," with his brother Jon, detailing the diplomatic and military developments of that war. He also briefly worked for the Jerusalem Post as a journalist.

Mr. Kimche joined Mossad in the early 1950s and was among those who designed its doctrine and method of operations, according to the Israeli newspaper Haaretz. In the 1950s, he exposed Avri Elad, an Israeli intelligence officer who told Egyptian military about local Jews working for Israeli intelligence. In the 1960s, he served undercover in Africa, posing as a journalist, when the continent was seen as a key to Israel's security.

He had been "the man with the suitcase," Hadar wrote in 1991, who would "appear in an African country a day or two before a major coup and leave a week later after the new regime was firmly in control, often with the aid of Israeli security teams." Mr. Kimche later supervised agents who infiltrated Arab countries. Haaretz said he was involved in the unit responsible for the security of Jews around the world and was a founder of Mossad's research department.

Mr. Kimche rose to Mossad's second-highest post but left the agency in 1979 over a dispute with his superior. He became director general of Israel's Foreign Ministry, a job he held until 1986, then turned to private enterprise. He also authored another book, "The Last Option: After Nasser, Arafat and Saddam Hussein" (1992).

He was recently president of the Israel Council of Foreign Relations and was involved in initiating peace talks with the Palestinians. Two years ago, he signed a petition supporting talks with Hamas.

Survivors include a wife and four children.