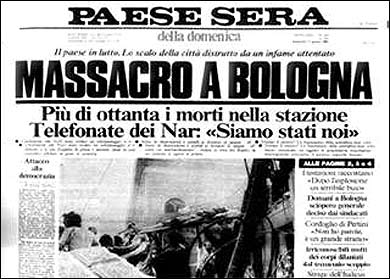 Each time just after an act of terrorism in Turkey there is this strange obscure vacuum. When the assault is claimed and even when suspects have been detained there will always be questions about the facts.

It’s far from illogical to bring up questions like, “Who really did it?” An analytical view of modern history shows that terrorism is often not what it appears to be at first. An act of terrorism may very well be instigated by provocateurs who have infiltrated groups. Or it may be a “false flag” operation, meaning terrorism committed in ways that make it appear as though it was done by others. With such strategies entering the arena, the edges between various forms of extremism can become very blurred. And they become even more blurred with the phenomenon that extremists on whatever side usually have more in common with each other than with the moderates in society. This effect can lead to the most paradoxical alliances and is often the reason why nothing is really what it seems at first with terrorism.

There is a distinctive psychological side to terrorism. While traditional warfare is about gaining territory, the terrorist wants to conquer public opinion instead. Whether based on religious or political ideologies, terrorists always go for public opinion one way or another. The intention to create political chaos through violence is another common denominator between them. These common grounds can to a certain extent lead to contacts and sometimes even to cooperation and joint operations by groups which oppose each other entirely in the “normal world.” A similarity in strategies applied by various terrorist groups is usually the basis for connections of this kind. Let’s illustrate this with the strategies of radical left and extreme right terrorist groups in Italy during the ’70s. Of course, we see opposing schemes. Violence from the left follows the expectation that political chaos will unmask the state, followed by a sequence of unchained revolutionary events. In the approach of right-wing terrorism, political chaos and instability will make the public demand drastic measures, with success for right-wing parties during elections, or a military takeover as an imagined result. Major differences. The point is that as long the state of political chaos has not been reached, the strategies are almost identical, which is the lubricant for infiltration and black flag operations. This combination is able to cover any terrorist attack in a shroud of uncertainty. That’s what happened in Italy during the ’70s. And that’s what seems to be taking place in Turkey nowadays.

A project of the early Cold War years

In the Italy of the ’70s, neo-fascist terrorists routinely planted radical red flags on the bodies of their randomly chosen victims. This manipulation of public political consciousness was masterminded by Gladio, the popular name of a network which emerged in the early Cold War years. On the command of Washington and the CIA, each NATO member had to arrange a secret “stay behind” network. The original task of this structure was to coordinate resistance in the eventuality of the occupation of Western Europe by the Soviet Union. To be prepared for the situation, weapons were hidden in secret places and intelligence channels were established. But Gladio was more.

The Gladio strategists recognized the socialist movement in Europe as a high risk factor. In the event of occupation by the Soviets, it was feared that the left would turn against Western interests and form a fifth column. Several campaigns against the left were set up to curb the danger. The most extreme alternative intended to break the reputation of the left-wing movement by associating it with political violence. However, the leftist activists who were willing to use violence represented a tiny minority within the movement at the time. To counter this problem, false flag operations were planned by Gladio, while the most radical elements in left-wing groups were provoked into action by right-wing infiltrators from the Italian deep state.

The use of such methods was recommended in a document known as “Field Manual 30-31” (FM 30-31). Originally composed by US strategists in the Pentagon and later translated into the languages of the NATO member states, it taught far-right activists how to deal with the left.

For European governments considered as passive towards the socialist movement, FM 30-31 prescribed “special operations,” i.e., infiltration and black flag ops, to confront the public with the “true nature” of the leftist enemy. In 1978 politician Aldo Moro met his end in this context. He was abducted and killed by a branch of a radical leftist organization, the “Brigatto Rosso.” Later on it appeared that this group had been infiltrated by right-wing, Gladio-connected agents. Before the death of Moro, Italy had already gone through much violence with the infamous bomb attacks in Piazza Fontana in 1969 and Peteano in 1972. The climax followed in 1980 in Milan, when the roof of the city’s central station collapsed after a bomb explosion, causing 85 deaths.

One of the most infamous Gladio-connected names is that of Stefano delle Chiaie. This member of the nationalist neo-fascist organization Ordine Nuovo was one of the most important Gladio tools against the left. As far as the relationship between Gladio and the Turkish deep state of the ’70s is concerned, it should be mentioned that delle Chiaie was seen in the company of Turkish ultranationalist terrorist Abdullah Çatlı, who died during a much-discussed traffic accident in Susurluk in 1996. Before his death, Çatlı followed delle Chiaie on a trip to South America, where both made contact with local fascists and representatives of military regimes.

First, there was Gladio in Italy. Now Ergenekon, the next chapter of Turkey’s deep state, is being exposed. In many ways Ergenekon comes across as a remnant of the stay-behind structure from the ’50s, as a branch was set up in Turkey as well. With the end of the Cold War, a break with the past took place in organizations within the Turkish version of Gladio. The focus shifted in directions other than the left, with the Justice and Development Party (AKP) and the Gülen movement the latest targets of Turkey’s deep state.

But although the enemies are new, one thing hasn’t changed, because the strategies of today show a striking resemblance to those of the past. Ergenekon still uses the same psychological methods as Gladio did in ’70s Italy such as black flag operations and most likely infiltration by provocateurs, as well, for there are more than a few indications that Ergenekon has been provoking political and radical religious organizations to commit violent acts. The Kurdistan Workers’ Party (PKK), the Marxist/Leninist Revolutionary People’s Liberation Party/Front (DHKP/C) and the Islamic Hizbullah have been mentioned in this respect.

Prosecutors portray Ergenekon as the mastermind behind actions attributed to the aforementioned groups. In attacks ranging from the assassination of businessmen and political activists by the DHKP/C and Hizbullah to the current wave of violence unleashed by the PKK, according to the prosecutors, Ergenekon is hidden behind it all. In the picture drawn by the investigation, Ergenekon is the Gladio of the 21st century. It is committing terrorism through terrorism and fighting a secret war against a nation from within the state.

The comparisons to Italy during the ’70s are abundant. But there’s one main difference between then and now: While Gladio was abolished and dismantled by European countries long ago, no such thing ever happened in Turkey. Italy was able to come to terms with the situation during Operation Clean Hands, which followed the exposure of the stay behind structure and its illegal activities in the early ’70s. Turkey never underwent this process. However, it is important that it will. Not only because it seems essential for the further growth of Turkey, for instance towards fully fledged membership in the European Union, but also for psychological reasons, so that Turkey is able to look in the mirror without reserve. After decades of deep state psychological warfare, this can be difficult. But that’s the process Turkey is now in.

Though the machinery may be gone, the psychology remains. Usually fundamentalist rightwing doctrines and pseudo-theologies of moral purity coming from the rightwing establishment are a delusional facade covering up a much more sordid reality of corruption, mass murder, and huge systemic theft. Lookee here, up jumps Stefanon Delle chiaie also aligned with the P-2 lodge that murdered off John Paul I to cover up the rightwing takeover of the church and doctrinal christianity just like the rightwing CIA people in the 80’s and right up to the present day in the US.
Still we find that individuals socialized in these brutal milieus during their childhoods like Frank Schaeffer are now renouncing them in favor of true new testament doctrine. So culturally though many christiand are at odds with their church doctrines or are completely misled by propaganda, many of us are now seeing the light in the darkness of these days and are arriving at the conclusion individually that the churches in large part have abandoned true Christianity in favor of a false doctrine or heresy as prophesied in revelations and other sections of the bible.