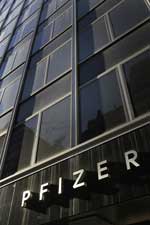 The U.S. Supreme Court’s decision to send the Pfizer (PFE) Trovan case to trial threatens to do the one thing the pharmaceutical industry most wishes won’t happen: Reveal to Americans exactly how foreign drug trials are unregulated, sometimes dangerous and often unreliable.

The seemingly endless Trovan case involves Pfizer’s test of a meningitis drug on 200 children in Kano, Nigeria, in 1996. Pfizer failed to get proper consent for the trial. Eleven kids died and the drug was eventually nixed because it was too dangerous. The events may have inspired the book and film, The Constant Gardener. Pfizer has attempted to do the right thing in recent years by settling the case for $75 million, but it’s been stymied by local bureaucracy and corruption.

One friend-of-the-court brief filed in support of Pfizer was from the Washington Legal Foundation. Why might this conservative legal think tank have a sudden interest in the intricacies of the Alien Tort Statute (the law at stake in the Supreme Court appeal)? All will be revealed …

The case coincides with an investigation of the FDA’s lack of supervision of drug trials on foreigners conducted by the Office of the Inspector General. It found that the FDA looks at only 1 percent of trials conducted outside the U.S. The trial data are then used to convince the FDA to approve medicines which are taken by Americans.

Other disconcerting facts about the U.S. drug industry’s use of foreign resources include:

Of course, the Pfizer case won’t be a general inquiry into industry practices, just those of Pfizer. That might be messy enough on its own. Although the Trovan tale is already widely known, the detail in the actual complaint, Abdullahi et al v. Pfizer, has been seen by only a few people because it was not electronically filed in the federal court system’s online database.

Some of that mess was hinted at in the Second Circuit Court of Appeal’s decision on the case. It turns out that a Pfizer doctor may be a whistleblower in the case, who balked at the Trovan trials when his coworkers began faking their paperwork:

At the time, Pfizer also claimed to have secured approval from an IDH [Nigeria’s Infectious Disease Hospital] ethics committee. Appellants allege, however, that the March 1996 approval letter was backdated by Nigerian officials working at the government hospital well after the experiments had taken place and that at the time the letter was purportedly written, the IDH had no ethics committee. Appellants also contend that the experiments were condemned by doctors, including one on Pfizer’s staff at the time of the Kano trial.

A Nigerian physician who was the principal investigator for the test allegedly admitted that his office created the backdated approval letter when the FDA conducted an audit of the experiment in 1997.

That kind of thing will give Pfizer a huge PR headache if this case ever gets into open court. Which returns us to the question of why the WLF was so interested in trying to help Pfizer persuade the Supremes to reinstate an earlier ruling dismissing the litigation. Here’s a theory: Attorney Arnold Friede is closely allied with the WLF, and he was senior corporate counsel at Pfizer from 1998 to 2008 — the period during which the Trovan case originated and matured. What an amazing coincidence!