Fort Hood Shootings Is the CIA Controlling the Investigation and Trial of Nidal Hasan?

Is the CIA Witholding Information on the Shootings?

... Responding to a report that the Army psychiatrist suspected in last week's Fort Hood shootings had tried to contact people within al Qaeda - and that government intelligence agencies knew about it and are refusing to brief Congress on it - a U.S. intelligence official told CBS News that the CIA isn't withholding information from Congress. ... ABC News published the report Monday morning with details that the CIA was refusing to brief the congressional committees charged with overseeing the intelligence agencies, a senior lawmaker told ABC. ... The report comes a day after lawmakers discussed the possibility of launching a congressional investigation into the worst mass shooting at a military facility in the United States last week that left 13 dead and 29 wounded. ...

.,.. In recent years, Major Hasan attended a mosque in Silver Spring Maryland which hosted fundraising for CIA covert operations against Russia: “Imam Faizul Khan ministered to Hasan when he worshiped at the Muslim Community Center in Silver Spring , Md . The Muslim Community Center has held fundraisers for Chechen jihadists, and promotes on its website a Shariah-based financial product offered by a Muslim Brotherhood front group under federal investigation.” The essential element here is that the mosque was raising money for Chechen rebellion, which is notoriously a strategic tool of the United States and the United Kingdom against Russia. ...

Recalling the official probe of the Fort Hood  shootings - chaired by former CIA/FBI director William Webster - this bio from the blog of Hasan's defense attorney, John Galligan, gives us Georgetown U. with its myriad intelligence ties, and a background in military intelligence: 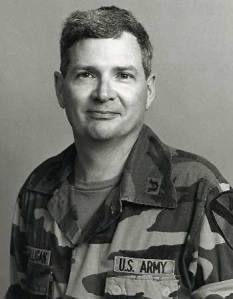 Colonel John Galligan retired from the US Army in June 2001.

At the time of his retirement, he was serving as the Chief Circuit Judge, 3rd Judicial Circuit, Fort Hood, Texas.

Graduating in 1971 from Georgetown University (School of Foreign Service) in Washington DC, Colonel Galligan was commissioned as a Second Lieutenant in the Military Intelligence branch.

To fulfill his Regular Army commission responsibilities, he served as a combat arms officer in the Infantry branch, initially as Platoon Leader and later as Company Executive Officer and then Brigade Courts and Boards Officer, with the 41st infantry, Combat Developments Experimentation Command, at Fort Ord, California. ...

2009: Robert Gates Orders up an Investigation Headed by TOGO WEST and VERNON CLARK

Both have extensive right-wing CIA, intelligence contractor and military-industrial ties:

Leaders of a Pentagon-appointed task force charged with investigating what factors led to the Fort Hood massacre Nov. 5 and recommending policies to prevent future attacks began their review today, saying their job is not 'to point fingers.' Togo West, former Secretary of the Army and Secretary of Veterans Affairs during the Clinton administration, and former Chief of Naval Operations, Admiral Vernon Clark, are leading the review board. They arrived at the Fort Hood base today to begin what will be a 45-day investigation."

Admiral Vernon E. Clark USN (Ret.) (born September 7, 1944) was the Chief of Naval Operations (CNO) in the United States Navy. He retired 22 July 2005, making his tenure of five years the second-longest serving CNO behind Arleigh Burke. He currently sits on the board of directors of Raytheon and SRI International. ... He directed the Joint Staff's Crisis Action Team for Operation Desert Shield and Operation Desert Storm. ... Admiral Clark now serves on the Board of Directors of Raytheon Company, Rolls Royce North America, SRI International, Horizon Lines ... He serves as a senior advisor with Booz Allen Hamilton, the Defense Policy Board, the advisory boards of Fleishman-Hillard, Computer Science Corporation (CSC) ... (Source: Wikipedia)

Some of these companies (Halliburton, Blackwater, CSC) have engaged in war crimes - similar to those Hasan tried to report ...