One of world's top experts on biological warfare 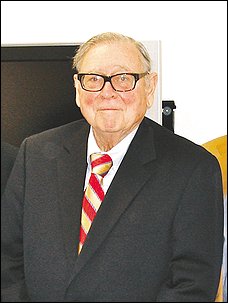 William C. Patrick III, 84, one of the chief scientists at the Army Biological Warfare Laboratories at Fort Detrick and who was responsible for overseeing the military's top-secret weaponization of some of the world's deadliest diseases, including anthrax and tularemia, died of bladder cancer Oct. 1 at Citizens Nursing Home in Frederick.

Mr. Patrick held five classified U.S. patents for the process of weaponizing anthrax. He was chief of the development program at Fort Detrick in Frederick for much of the Cold War.

In the 1960s, Mr. Patrick led the highly classified weaponization of tularemia, a disease he considered superior to anthrax as a biological agent because of its potency.

Under Mr. Patrick's direction, scientists at Fort Detrick developed a tularemia agent that, if disseminated by airplane, could cause casualties and sickness over thousands of square miles, according to tests carried out by the U.S. government.

Some experts believed that the research showed biological weapons could be as devastating as a nuclear blast. In a 10,000-square-mile range, the biological weapon had a 90 percent casualty rate and 50 percent fatality rate, capable of killing its hosts within hours of infection.

The Fort Detrick biowarfare program was started in the early 1940s under President Franklin D. Roosevelt after the Allies received intelligence reports that the Germans and Japanese were pursuing biological weapons.

His staff also devoted attention to anthrax because of its speed in poisoning its host. ... His business card was adorned with a skull and crossbones. ...

Mr. Patrick joined the effort in 1951 and became chief of the development program in 1965. His team explored the world's deadliest diseases, including Q fever, plague and Venezuelan equine encephalitis. His staff also devoted attention to anthrax because of its speed in poisoning its host.

In interviews over the years, Mr. Patrick said his development program tested more than 20 anthrax strains to discern the most lethal variety. The deadly spores engineered at Fort Detrick were capable of wafting more than a mile through the air - rendering concrete barriers and other modern military defenses useless against attack.

To disseminate the biological agents, the Fort Detrick scientists hid them in aerosol spray systems inside fountain pens, walking sticks, light bulbs and even in the exhaust pipes of a 1953 Mercury.

They conducted mock attacks in places bustling with people, including the New York subway system and Washington National Airport, in the latter case releasing anthrax simulants hidden in suitcases.

Afterward, Mr. Patrick focused on defense against biological weapons, helping to find ways to neutralize the agents he once produced.

After working for an Indiana company that produced antibiotics, Mr. Patrick was recruited to the Army's biowarfare efforts by a former professor at Tennessee.

Mr. Patrick's first marriage, to the former Sara McCoy Ayer, ended in divorce. Survivors include his second wife, Virginia Howsare Patrick of Frederick, whom he married in 1972; two sons from his first marriage, William T. Patrick and Mark E. Patrick, both of Rockville; and two stepchildren, Theresa Bedoya of Baltimore and Martin Lynch of Nashville.

After retiring in 1986, Mr. Patrick remained one of the world's foremost experts on biological warfare and defense and served as a consultant to the CIA, FBI and U.S. military. His business card was adorned with a skull and crossbones.

In the early 1990s, Mr. Patrick led the debriefing of Soviet defector Ken Alibek, who as Kanatjan Alibekov was the deputy chief of the Soviet biowarfare program.

In the mid-2000s, the FBI sought Mr. Patrick's biological weapons expertise for the investigation of the anthrax attacks along the East Coast. A few years earlier, he had been commissioned to write a report on the effectiveness of an anthrax attack spread through the mail system. In the report, Mr. Patrick described how an envelope laced with 2.5 grams of anthrax could do significant harm by direct and indirect contact.

The anthrax attacker - who authorities claimed might have studied Mr. Patrick's report as a "blueprint" - used about the same amount to kill five people and sicken 13 others.

Mr. Patrick was often called on to provide testimony for hearings involving bioterrorism, and was known to participate with zeal. In a 1999 appearance before the House Permanent Select Committee on Intelligence, he pulled out a small plastic bottle filled with 7.5 grams of an inert anthrax simulant.

"I've been through all the major airports and the security systems of the State Department, the Pentagon, even the CIA, and nobody has stopped me," Mr. Patrick said, noting that if his simulant had been real anthrax, it could "take care of the Rayburn building and all the people in it."

As one of fewer than 100 Americans with operational knowledge of biological agent production, Mr. Patrick was sent to Iraq in 1994 as a U.N. weapons inspector to look into Saddam Hussein's alleged covert germ laboratories.

Despite the macabre nature of his work at Fort Detrick, Mr. Patrick spoke about how vital his profession was to national security.

"We did not sit around talking about the moral implications of what we were doing," he told the Baltimore Sun in 2004. "We were problem-solving."