Joe Kent releases documents amid questions over who is paying US House candidate’s salary By Troy Brynelson (OPB) - Oct. 25, 2022

Murky details, coupled with Kent’s work with both the Green Berets and the CIA, have raised questions among critics and national media. 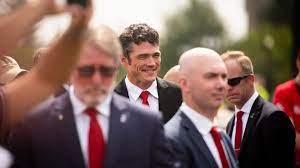 A Republican congressional candidate in Southwest Washington is defending himself against questions over where he works and where he gets his money.

Joe Kent’s campaign staff on Tuesday provided glimpses of the candidate’s tax documents that show his employer, his wages and the employer’s place of business, which had been impossible to trace using the information Kent’s campaign provided to federal regulators.

In filings and multiple times on the campaign trail, Kent has called his employer “American Enterprise Solutions.” He’s described it as a “tech start-up” that works with 5G infrastructure.

The tax documents show the company is called Advanced Enterprise Solutions, most recently based in Virginia. Kent’s campaign staff provided just photos of the top level of the tax documents, while redacting Kent’s home address and the employer’s tax identification number

The documents suggest that Kent and his campaign have repeatedly misstated his company’s name, both in person at campaign events and in federal filings.

Still, little is known about the firm and its leadership. Those murky details, coupled with Kent’s career stints with the Green Berets and the CIA, have raised questions among critics and national media about who exactly supports Kent financially, including suggestions he’s working for the CIA or a private benefactor. The difficulty of tracking Kent’s employer was first reported by The Daily Beast.

Ambrose Partners, a Washington D.C. law firm that the Kent campaign said represents the company, issued a statement to OPB confirming only that Kent “is employed by a US company.”

The company “does not wish to be identified, only because while their employees are free as individuals to participate in politics, they as a company do not.” The company added it “fully supports his patriotic pursuit of civil service as they do for all citizens regardless of political affiliation.”

In an interview, Kent and his senior policy advisor Matt Braynard maintained that the candidate’s job is legitimate and he works regularly.

“I do have flexibility, and I can dictate my schedule. I don’t have a boss, you know, making sure I clock in and clock out and report at a desk somewhere,” Kent said in a phone call. “But it requires, you know, a fair amount of work on a daily basis.”

On Sunday, The Daily Beast reported it could not find any trace of Kent’s employer, despite the candidate frequently mentioning he worked with a company called “American Enterprise Solutions.”

The news organization wasn’t the first to raise questions about Kent’s history. A website critical of Kent – JoeKentIsCIA.com – launched before the August primaries fan conspiracies that the candidate is a “deep state puppet.”

Meanwhile, voters are preparing to decide between Kent and Democrat Marie Gluesenkamp Perez. Ballots have already been mailed out in Washington state.

The Daily Beast reported that its reporters were unable to surface any records of the business that Kent talked about and provided to federal regulators. The publication said it searched from county-level business registration records to databases of government contractors.

Adding some fuel to the question of who pays Kent’s salary is his background in the military and in intelligence. He left a career “in the shadows,” as he has called it, after his U.S. Navy cryptologist wife died in a suicide bombing in Syria in 2019.

Kent moved to Portland, where he was raised, shortly after. He then relocated to rural Clark County, Washington.

His political career has abounded with conspiracy theories. In speeches, he leans on his military credentials to question the legitimacy of everything from COVID-19 vaccines to the 2020 election. He’s speculated the 2021 U.S. Capitol attack may have been orchestrated by the FBI.

Confusion over Kent’s professional career may stem from the fact that Kent has repeatedly called the company “American Enterprise Solutions.” He even listed his employer by that name in federal filings required by candidates. Federal regulators threaten stiff penalties for providing inaccurate information.

In a financial disclosure report filed April 2022, the Kent campaign reported he earned $122,110.36 from “American enterprise solutions.” Braynard called that a typo, for which he took the blame.

“The typo is my fault and I accept full responsibility for the transcription error,” Braynard said in an email early Tuesday. “We will be updating / amending the report post haste.”

However, Kent has been filmed calling his company “American Enterprise Solutions” at campaign events. He also listed that name as his employer in more than 30 donations to politicians and political organizations from May 2020 to July 2021, federal records show. Those details were first reported by The Daily Beast.

Regarding the donations, Braynard said he was “digging into that.”

“I processed the donations (starting from April 2021)... and the earlier ones were processed through WinRed that saves your donation information,” Braynard said. “So it was possibly mis-entered one time with the first donation and then carried over each time.”

“There’s a good chance I screwed it up,” he said. According to Kent, the company was at some point called “American Enterprise Systems.”

The documents show the company recently relocated. In 2020, its listed address was a one-story building in Milford, Delaware. A year later, it moved to an office building in Herndon, Virginia.

“We’ll go out and do mapping and survey and say ‘This is what the infrastructure is, it’s capable of this,’” Kent said.

Kent said his role as a project manager entailed hiring people in those countries to be boots-on-the-ground. The company provides reports to its clients. Kent offered the name of the company’s chief executive but declined to provide contact information.

Prior to joining Advanced Enterprise Solutions, Kent briefly started an LLC in Portland. That company sold military training services, which he said regularly sent him to Joint Base Lewis-McChord near Lakewood, Washington.

Kent first met the firm’s executive, named Sean Reed, in 2019. Kent said the company hires many former veterans. Kent said he and Reed had “a lot of mutual friends” who introduced them. He accepted a job offer in August 2019, he said.

When asked how often he would say he’s clocked-in for work, Kent said, “it varies.”

Byron Sanford, who worked as Kent’s campaign manager from March to December 2021 before being fired, said in an interview that Kent spends most his time campaigning and called his career a “phantom job.”

“I really don’t think he put any actual hours into doing anything other than campaigning,” Sanford said. He now works for a political action committee in Nevada working to elect Republicans.

“I think people should know that (Kent’s) using these funds to run for office,” Sanford said. “That money is coming from somewhere. It’s coming from this company that he doesn’t even work for.”

Braynard and Kent dismissed Sanford as a jilted former staffer.

The Kent campaign has to date raised nearly $3 million dollars, according to the latest filings with the Federal Election Commission. Kent has gone on record saying he kickstarted his campaign with $205,000 he received from his late wife’s insurance policy.

Kent also reported in federal filings he signed an $80,000 deal with Harper Collins to write a book about his wife. The deal included a $40,000 advance, he reported.

Kent has given himself about $44,000 in in-kind contributions over the course of his campaign, federal filings show, usually paying for gas and airfare.