Lori Clune is a lecturer in history at CSU Fresno and a PhD candidate at UC Davis. Her dissertation is entitled "Executing the Rosenbergs: A Transnational History." 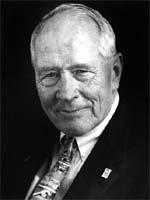 I met Stephen Ambrose when I was a young, idealistic graduate student attending my first American Historical Association conference in the late 1980s. He graciously shared his paper – and enthusiasm – with the groupies he attracted. Years later, his Rise to Globalism was on my coffee table so often that I have a photo of my then two-year-old son “reading” it. It is safe to say his work played a role in my decision to study history.

The New Yorker’s recent allegations that Ambrose manufactured interviews with – and likely quotes from – Eisenhower (“Channeling Ike,” by Richard Rayner, April 26), combined with earlier accusations of plagiarism, have tarnished his reputation. In my research on the case of Julius and Ethel Rosenberg (arrested for conspiracy to commit espionage in 1950 and executed in 1953), I have recently discovered instances where Ambrose also fabricated information from written documents.

In chapter thirteen of Ike’s Spies: Eisenhower and the Espionage Establishment (1981), Ambrose explains in two footnotes that his section on the Rosenberg case is based on his interviews with Eisenhower and Attorney General Herbert Brownell, and Eisenhower’s memoir of White House years 1953-56, Mandate for Change (1963). On page 182 of Ike’s Spies Ambrose writes: “Some of Ike’s most trusted advisers told him he would have to grant a stay of execution because the nation simply could not put to death the mother of small children. Many in the Cabinet recommended clemency.”

I do not believe any part of these statements to be true. While we cannot know what Eisenhower or Brownell told Ambrose when interviewed, in Mandate for Change Eisenhower makes no mention of advisers urging clemency because Ethel was a mother, or for any other reason. For Cabinet recommendations, I attempted to corroborate Ambrose’s account with Cabinet meeting minutes. The minutes from the two meetings where the Rosenberg case was discussed (12 February 1953 and 19 June 1953, the day of the executions) contradict Ambrose’s assertions. According to the Cabinet minutes of Staff Secretary L. Arthur Minnich, no one expressed support for clemency when asked at the February meeting. During the June meeting, U.N. Ambassador Henry Cabot Lodge and presidential advisor C.D. Jackson suggested the need for an additional presidential statement on the case, but no one recommended clemency. According to Attorney General Herbert Brownell’s oral history housed at the Eisenhower Library (interview by Ed Edwin, 5 May 1967, OH-157, 3 of 5, 189-196), Brownell stated (page 193-4): “I cannot recall that any Cabinet member voiced such a position [support for pardon] at the Cabinet meetings…I can’t remember any Cabinet member ever dissenting from that viewpoint [that the Rosenbergs were guilty].” Brownell continued on page 196 that Eisenhower “would have subordinated his views about the world-wide effect on the Russian government’s propaganda campaign” and offered clemency if the president doubted the Rosenbergs’ guilt, which Brownell asserted he did not. While it is theoretically possible that Brownell, in a subsequent (undated) interview with Ambrose, contradicted his earlier insistence that Eisenhower allow the executions to proceed, this does not hold up to the propensity of evidence. In fact, while international opinion ran hot for clemency, the majority of Americans appeared to support the executions and had little problem putting “to death the mother of small children.”

Another example comes from Ambrose’s discussion of the Rosenberg case in Eisenhower: The President, Volume Two (1984). On page 84 Ambrose writes that on the day of the executions Eisenhower “said he could not remember a time in his life when he felt more in need of help from someone more powerful than he.” Ambrose’s footnote reads Emmet John Hughes’ The Ordeal of Power: A Political Memoir of the Eisenhower Years (1962), 80; and Minnich, Cabinet, 6/19/53. Hughes, an aid and speechwriter for Eisenhower, quotes Minnich’s Cabinet meeting minutes and makes no mention of Eisenhower’s “need of help.” This sentiment is not in any of the versions of the June 19 Cabinet meeting agendas or minutes. One wonders why Ambrose felt compelled to imply that Eisenhower needed the help of a higher power when he decided to allow the execution of Julius and Ethel Rosenberg to proceed. Eisenhower “could not remember a time in his life” when he needed “help from someone more powerful.” Really? Not even D-Day?

While small examples, these hint at a much larger problem. Ambrose not only fabricated interviews with Eisenhower, he manufactured written evidence relating to his presidency as well. I found these discrepancies in just a few hours in one little corner of Eisenhower’s career, the Rosenberg case. If we all investigate the pieces we know best, a clearer picture will emerge. Perhaps the examples I have from the Rosenberg case are unique. I fear, however, that for today’s graduate students Ambrose will be known more for plagiarism and falsified evidence than for his popular narrative prose.

It seem terribly thin evidence and admittedly limited research to warrant your conclusions. But he’s deceased and appears to be an easy target for this sort of “scholarly” offering.

“The Millionaire Oil Men of Dallas are Stupid”: Dwight Eisenhower Writes to His Brother

‘U-2 Brute’: Behind-the-Scenes Details of the CIA Spy-Plane Face-Off with the Soviets