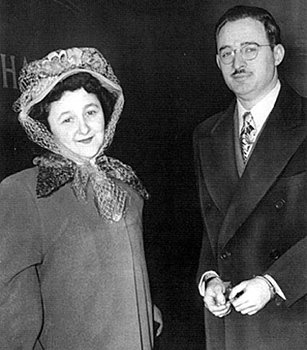 A key prosecution witness whose testimony helped send Ethel Rosenberg to the electric chair gave a different account at trial than she did before the grand jury in the famous Cold War spying case, according to documents released yesterday.

The revelations are contained in hundreds of pages of grand jury transcripts from the case of Julius and Ethel Rosenberg, who were executed in 1953 for providing the Soviet Union with secrets that may have led to its development of an atomic bomb. More than half a century after the transcripts were sealed, a New York court ordered publication of the testimony of 41 of the 45 grand jury witnesses, including such key figures as Ethel Rosenberg and Ruth Greenglass, who was married to Ethel’s brother, David Greenglass.

In recent years, however, David Greenglass has recanted his testimony, and historians said yesterday that the newly published transcripts show “irreconcilable” differences between Ruth Greenglass’s grand jury testimony in August 1950 and her testimony at the trial, suggesting that she had altered her story.

According to the grand jury transcripts, Ruth Greenglass, who said she had been recruited into spying by Julius Rosenberg, was asked, “Didn’t you write [the information] down on a piece of paper?”

“Yes,” she answered, “I wrote [the information] down on a piece of paper and [Julius Rosenberg] took it with him.”

Ruth Greenglass was never tried; her husband served 10 years in prison. She died in April at age 84.

Ronald Radosh, professor emeritus of history at City University of New York, said information from a U.S. government decryption program called Vanona, which deciphered Russian codes, showed that Julius Rosenberg provided the Russians handwritten notes, not typewritten ones. This contradicted Ruth Greenglass’s trial testimony and suggested that it was her own notes that were passed to the Soviets.

“What is important about the Vanona decrypt is that it substantiates what Ruth told the grand jury,” Radosh said.

Previous Article
Gonzales Violated Security Rules with Spy Docs, Lied to Cover it Up
Next Article
Hoover and the FBI

Hoover and the FBI
Sep 12