Nixon and the Bay of Pigs (Excerpt) 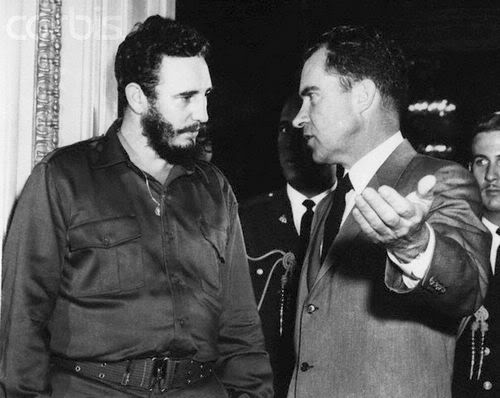 "Many well informed people consider that the disappearance of Fidel would accelerate the fall of the government. …" - Richard Nixon

AS early as April 1959, when Nixon received Fidel Castro, the then U.S. vice president’s support for the defeated dictator Fulgencio Batista —whom he visited in 1955, two years after the assault on the Moncada Garrison— and his alliances with oligarchic interests, prompted him to demand the guerrilla leader’s removal. The measures taken to achieve that proposition culminated in the Bay of Pigs invasion of April 17, 1961.

Nixon was one of those politicians who utilized anti-communism as a way of getting ahead. Born in Yorba Linda, California in 1913 and with a scholarship at Duke University in North Carolina he obtained a degree in law in 1937 and joined the firm of Winger & Bewley, until he became a partner. When World War II broke out, he enlisted in the Navy and subsequently totally devoted himself to politics.  He was elected to the House of Representatives running against Jerry ]Voorhis] whom he accused of being an instrument of Moscow.

In 1948 and 1949, he was a key figure in Senator Joseph McCarthy’s House Un-American Activities Committee, where he distinguished himself nationally by condemning Alger Hiss, a former State Department official. For that he was assigned to take part in the Marshall Plan and prevent the advance of socialism in Western Europe. In 1950, he was elected senator for California; in 1952, he became Eisenhower’s vice president; and he was U.S. President from 1968 to 1974, when he was forced to resign.

Fidel Castro recalled his historic meeting with Nixon: "As early as April of 1959 (the 19th) I visited the United States at the invitation of the National Press Club in Washington. Nixon deigned to receive me in his personal office… I was not an underground member of the Communist Party, as Nixon with his astute and scrutinizing look came to believe. Of one thing I can assure you, and I discovered that at University, it is that I was first a utopian communist and then a radical socialist, in virtue of my own analysis and studies, and disposed to fight with the appropriate strategy and tactics.

"My only reservation on talking with Nixon was a repugnance over frankly explaining my thinking to a vice president and probable future president of the United States, an expert in economic concepts and imperial methods of government in which I had stopped believing some time back."

Years later Granma published, in an article by Luis Báez, other details of the meeting with Nixon which Fidel recounted in an interview with U.S. journalists.

"It was a very frank interview on my part, because I explained how we saw the Cuban situation and the measures which we intended to adopt. In general, he didn’t argue, but was friendly and listened to everything that I had to tell him. Our conversation was limited to that. I understand that he drew his own conclusions from those conversations. I believe that it was after that when the plans for the invasion began."

The meeting with Nixon lasted a little more than two and a half hours and the opinion of the Vice President of the United States was declassified years later:

"in terms of his visit to the United States, his fundamental interest was not to achieve a change in the sugar quota nor to obtain a government loan, but to win the support of U.S. public opinion for his politics... I should also acknowledge that in essence I found very few motives for disagreement in his arguments.

"With much tact I tried to suggest to Castro that Muñoz Marín had done wonderful work in Puerto Rico with respect to attracting private capital and in general to raise his people’s standard of living, and that Castro might very well send one of his main economic advisors to Puerto Rico to talk with Muñoz Marín. This suggestion did not meet with much enthusiasm on his part and he noted that the Cuban people were ‘very nationalistic’ and would suspect any program initiated in a country considered a ‘colony’ of the United States... It is worth noting that he did not ask me anything regarding the sugar quota and did not even specifically mention economic aid."

"My evaluation of him as a man is somewhat ambivalent. What we can be sure of is that he possesses those indefinable qualities which make him a leader of men. We would have to treat him and deal with him accordingly - under no illusions about ‘fiery rebels' in the tradition of Bolivar.

"Independently of what we think of him, he will be a large factor in Cuba’s development and very possibly in Latin American affairs in general. He seems to be sincere, but incredibly naive about Communism or under Communist discipline."

"But as he has the power of leadership to which I have referred, the only thing that we could do was at least try to guide him toward the correct path."

Richard Nixon was later known as Dirty Dick, for the lack of scruples which he displayed in order to secure his objectives by dirty means, like the so-called Watergate plumbers who he sent to spy on Democratic Party candidates, headed by the CIA officer Howard Hunt, one of the leaders of the invasion of Cuba in 1961. That episode became the spark that ignited his presidency until he was forced to resign during his second mandate.

But his responsibility for the massacres in Chile are recognized, given that, when Salvador Allende was elected president of that country in September of 1970, he began to organize the CIA plot which, in alliance with the bloody General Augusto Pinochet, overthrew the democratically elected Popular Unity government and prepared the way for extending terror throughout all of South America.

Nixon’s recommendations prompted Eisenhower to decide to overthrow Fidel and thus, just seven months after the meeting in the United States, in a famous memorandum dated December 11, 1959, J. C. King, chief of what would shortly afterward be known as the Western Hemisphere Division of the CIA, called for a careful analysis of the possibility of eliminating Fidel Castro:

[... ] Many well informed people consider that the disappearance of Fidel would accelerate the fall of the government…."

The Bay of Pigs was one of the results.

[…] as Molina includes pieces of Nixon’s later declassified opinion in regards to Fidel Castro in his “The Day Nixon Met Castro” article. President Nixon was indeed right about Castro’s principles of communism for he later […]

“The Millionaire Oil Men of Dallas are Stupid”: Dwight Eisenhower Writes to His Brother