50TH ANNIVERSARY OF THE BAY OF PIGS

On October 26, 51 years ago, Fidel announced the creation of the Revolutionary National Militia. Granma International will be publishing a series of articles on the events leading up to the April, 1961 battle of the Bay of Pigs. As we approach the 50th Anniversary of this heroic feat, we will attempt to recreate chronologically the developments which occurred during this period and ultimately led to the invasion. The series will be a kind of comparative history, relating what was taking place more or less simultaneously in revolutionary Cuba, in the United States, in Latin America, within the socialist camp and in other places in some way connected to the history of these first years of the Cuban Revolution.

THE brothers Allen and John Foster Dulles were the principal architects of the U.S. cold war on Cuba, which has already exceeded half a century.

It was not for pleasure or ideology. According to The Worker newspaper, they had personal economic interests which determined their position toward the Island.

The Francisco and Manatí Sugar sugar companies were controlled by the J. Henry Banking Corporation of New York, headed by Allen Dulles who, as director of the CIA, was responsible for U.S. subversive plans to overthrow governments in Cuba, Indonesia, the Congo, Iran and Guatemala. He acted in concert with his brother, John Foster Dulles, secretary of state during the Dwight Eisenhower administration.

The United Fruit Company, which came to own plantations in Colombia, Costa Rica, Jamaica, Nicaragua, Panama, the Dominican Republic and Cuba, owned 109,700 hectares on the island, grabbed by clever lawyers from defenseless campesinos, along with facilities, buildings, machinery, heads of cattle and other assets. The United Fruit Company devised a way of validating its property deeds – whether legitimate or falsified – and expropriated most of the haciendas in Banes, in the former province of Oriente, to join together those lands in one huge estate.

Associates of the powerful Sullivan & Cromwell Company, as well as investors in United Fruit, the Dulles brothers – in conjunction with the Bush family, particularly the grandfather – dispatched assets worth one billion dollars to Adolf Hitler’s Nazi Party, according to Karlheinz Deschner in his book The Moloch Dulles. In addition, in his book Overthrow, Stephen Kinzer reveals that the company profited from doing business with the Nazi regime. Wikipedia also reports that John Dulles publicly supported the Nazis up until 1935 when he closed the Berlin office. In spite of those infamous tendencies, they claimed to be champions of democracy.

Allen maintained a personal relationship with Batista, whom he visited in 1955, in order to establish the basis for a kind of branch of the CIA, the Bureau for the Repression of Communist Activities, the sinister BRAC.

A document from November 24, 1959, declassified by the British government and handed over to Cuba by its American section in March 2001 – on the occasion of the Bay of Pigs 40 Years Later academic conference here – revealed that, at that point, Allen Dulles had his strategy for Cuba’s recapture well developed: he was pressuring Britain to prevent the sale to the revolutionary government of Hunter combat aircraft and a whole arsenal of other weapons, which were under negotiation. His secret objective was to force the Cubans to “solicit weapons from the Soviets or the Soviet Bloc”(1), in order to insert the island into the Cold War and thus give credibility to his thesis of the danger represented by the Cuban Revolution to the security of the entire Western Hemisphere. He tried to repeat that success with a similar tactic in 1954, which served as a pretext for the operation which overthrew President Jacobo Arbenz of Guatemala. Allen Dulles presented Cuba as a USSR platform in the Americas. 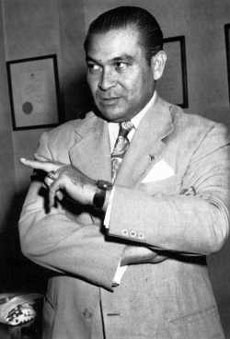 Just one month after Batista’s flight, the Eisenhower administration refused a modest credit line to a delegation from the National Bank of Cuba, requested because “the principal capos of the regime defeated by the Revolution had embezzled or had stolen $424 million from the gold and dollar resources backing the Cuban peso”…and were received in the United States together with the authors of the most abominable crimes and abuses against the Cuban people.” (2)

The radical Agrarian Reform Act which came into effect three months later, on May 17, immediately fuelled the anger of its neighbor to the North, given that it damaged, above all, United Fruit interests, at least according to the Dulles Brothers: “If we take away Cuba’s quota, the sugar industry would quickly suffer a rapid collapse, causing generalized unemployment. Many people would be left without work and would begin to go hungry… an economic war,” Secretary of State Foster Dulles acknowledged. (3)

Just six months after the Agrarian Reform Act was enacted, in a memorandum dated December 11, 1959 from J. C. King, chief of what would shortly become the Western Hemisphere Division of the CIA, called for “a careful analysis of the possibility of eliminating Fidel Castro [which] would greatly accelerate the fall of the government” (4) was approved and, particularly, the assassination proposal, as reflected in the note on the document, signed by Allen Dulles and dated one day later, on December 12.

In the name of freedom and democracy, the Dulles brothers subverted half the world. Their first defeat was in 1961, in Cuba. To a certain point it is natural although unjust, that those brothers, partners of United Fruit and Sullivan & Cromwell, should defend their personal interests. That would be expecting the impossible.

But it is too much of a mockery of human intelligence to believe that the Dulles brothers acted to preserve democracy and freedom. They lacked the honesty demonstrated by B. Rathbone, president of Esso Standard/Exxon, when he stated in Copenhagen in June 1961: “You cannot reproach us who are seeing with extreme displeasure how Soviet oil is being processed in our Cuban refineries.” That is arrogance without hypocrisy.