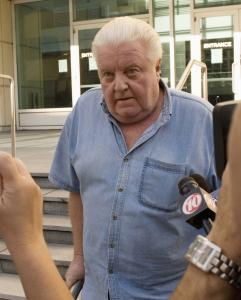 Burge was indicted in 2008 on federal charges of obstruction of justice and perjury. Prosecutors say he lied in his written responses to questionnaires and impeded court proceedings in a 2003 civil lawsuit.

The suit was filed by Madison Hobley, who accused detectives under Burge's supervision of physical abuse, including putting a plastic bag over his head until he fainted.

The indictment against Burge, 62, does not say Hobley was physically abused. It accuses Burge of being present, of having participated and of allowing the torture of suspects while he was lieutenant in Area Two headquarters from 1981 through 1986.

The former police commander also "corruptly obstructed, influenced and impeded an official proceeding by signing answers containing false statements in response to two [questionnaires] in the Hobley litigation," according to prosecutors.

Hobley is one of four former death row inmates who filed lawsuits accusing Burge of torturing them during investigations that led to convictions. The city council of Chicago voted unanimously in 2008 to pay $19.8 million to settle their claims.

Hobley received $7.5 million in the settlement, while Stanley Howard, Aaron Patterson and Leroy Orange were given $1.8 million, $5 million and $5.5 million respectively.

The settlement was approved two years after a $7 million report was released by special prosecutors saying law enforcement officials allowed Burge and his subordinates to torture criminal suspects over the past two decades. No officials were prosecuted based on the report because the statute of limitations had expired.

Burge was suspended by the Chicago Police Department in 1991 and fired two years later. The two counts of obstruction of justice and one count of perjury against him are the only criminal charges to result in the allegations of police brutality.

A rally will be held by advocacy groups in Daley Plaza to mark the start of his trial on Monday. The demonstration will be attended by other alleged police torture victims, including Mark Clements, who was released last August after 28 years in prison for a confession he says he signed after being beaten by detectives under Burge.