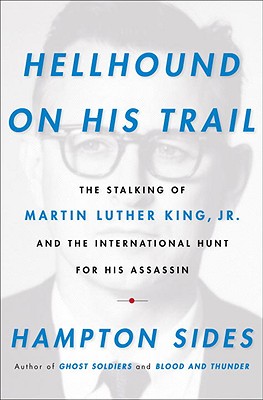 From: Hampton Sides," a Wikipedia bio:

Hampton Sides (born 1962) is an American historian and magazine journalist. He is the author of Hellhound on His Trail ... a media fellow at Stanford's Hoover Institution ...

Ooooooohhh  ... of course - why this book is just another anemic and transparent surrogate of an investigation, a hard-cover whitewash to conceal the embarrassing circumstances surrounding Martin Luther King's murder - the Hoover Institute,  that ultra-conservative, goose-stepping propaganda mill, home base of Condoleeza Rice and a spew of far-right, corporate-pocketed GOP poseurs.

Sides isn't the lone assassin here. There is also "PBS":

... Hellhound on His Trail is about the assassination of Martin Luther King, Jr., and the largest manhunt in American history to capture James Earl Ray, who was never tried but pled guilty as his lawyer told him that if he did not he would get the death penalty. His then lawyer gave his brother money so that after he pled guilty he could immediately hire a new one and appeal. Sides’ research on this subject forms much of the basis for PBS’s documentary Road to Memphis which originally aired on May 3.

Absent from Hampton Side's account is any mention of the problems with the official story that he tells. He makes no mention of any of the flaws that William F. Pepper A friend of Martin Luther King Jr and James Earl Ray's lawyer raised. For example he does not mention that when the FBI tested the supposed murder weapon the site was so far off that if it had been fired at King's head it would have hit the doorknob of his hotel room. For further information see William F. Pepper's book Act of State. Which comprehensively documents the assassination and Hampton Side's shortcomings. Reviews from Publishers Weekly amongst others are available on the site linked above. He also does not mention any of the evidence in the seminal legal event in the case, the 1999 civil trial held in Memphis TN; The King Family VS Lloyd Jowers et ala. In which a jury listened to the evidence presented by over seventy witnesses and then took less than an hour to find that Loyd Jowers and others including the government of The United States of America were guilty of conspiracy to assassinate Martin Luther King Jr. The New York Times covered the verdict with this article. Th full trial transcript is available at the King Center website. Coretta Scott King Said of the trial “For a quarter of a century, Bill Pepper conducted an independent investigation of the assassination of Martin Luther King, Jr. He opened his files to our family, encouraged us to speak with the witnesses, and represented our family in the civil trial against the conspirators. The jury affirmed his findings, providing our family with a long-sought sense of closure and peace, which had been denied by official disinformation and cover-ups. Now the findings of his exhaustive investigation and additional revelations from the trial are presented in the pages of this important book. We recommend it highly to everyone who seeks the truth about Dr. King's assassinatio" [[Coretta Scott King]]

A native of Memphis with a BA in history from Yale, Sides lives in Santa Fe with his wife Anne and their three boys, all soccer players. He is a past fellow of Yaddo, the MacDowell Colony, and the Japan Society, and a media fellow at Stanford's Hoover Institution. He is an adviser and board member of the Mayborn Journalism School's annual conference on Literary Non-fiction. Hampton has guest-lectured at Columbia University, Yale, Stanford, Colorado College, SMU, the Autry Museum of the American West, and the National World War II Museum, among other institutions. He has appeared as a guest on such national broadcasts as The American Experience, the Today Show, Book TV, the History Channel, Fresh Air, CNN, CBS Sunday Morning, The NewsHour with Jim Lehrer, and NPR's "All Things Considered."