Also see: "Neo-Nazi group joins litter fight" (Springfield News-Leader)
•••
" ... 'Every day is white day in school,' said Art Hodge. One person asked what the group wanted to do to Jewish people. Are they to all be sent to Israel? Group leaders wouldn't address that question. ... " 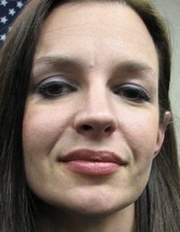 Around 30 members and supporters of the National Socialist Movement came to the Library Station on Saturday night to listen to speeches and take questions from opponents and potential recruits.

Springfield resident Cynthia Keene led the group in a pledge -- "We must secure the existence of our people and the future for white children" -- and then the Pledge of Allegiance. Other members read poetry or gave speeches explaining the group's beliefs, and several times members gave one another the Nazi salute.

Around 20 people who were not members of the group sat in the back, listening quietly. Reporters representing CBS and the Women's Entertainment Network, as well as filmmakers from France, were on hand to follow the group. NSM leaders have said the WE network came to highlight women in the group.

NSM leaders addressed the economy and the wars in Iraq, Afghanistan and Gaza. But they also talked about what they say is a need to develop pride among whites.

"You look at these young people right here in front of us, and what is being shoved down their throats every day at school?" said Steven Boswell, head of the Missouri unit. "Hatred of being white. People telling them they are wrong because they are white."

Christina Drake of Jefferson City told the group that when she first joined the movement it was not very family-oriented. Now, the group does a lot with younger people, she said.

But she wanted specifically to address the handful of people who were outside the library protesting the group's meeting. Some of those people came inside.

Their signs say they are fighting for diversity, but Drake said it is NSM that really wanted diversity.

"You are fighting for the mixing of the races," she said. "If all races mix, there will be no diversity."

Discussion that followed after the speeches was civil, with some non-members conceding that the speakers made points they support about wars or the economy.

But there was laughter at the suggestion that there should be a White History Day or month.

"Every day is white day in school," said Art Hodge.

One person asked what the group wanted to do to Jewish people. Are they to all be sent to Israel?

Their literature's "25 points of American National Socialism" makes it clear that the group would like some people to leave. "All non-White immigration must be prevented," says point number seven. "We demand that all non-Whites currently residing in America be required to leave the nation forthwith and return to their land of origin: peacefully or by force."

Point number four declares that no "Jew or homosexual may be a member of the nation."

At the front of the room was a table with literature, though one group leader decided to remove literature that featured a racial slur on its cover.

Earlier in the day, group members cleaned up the section of highway on West Bypass that they had adopted.

Member Ami Bostwick of Iowa said the effort went well, though there was one "small problem" with passers-by stopping to complain about them. The sheriff's office was on hand to help keep order, she said.