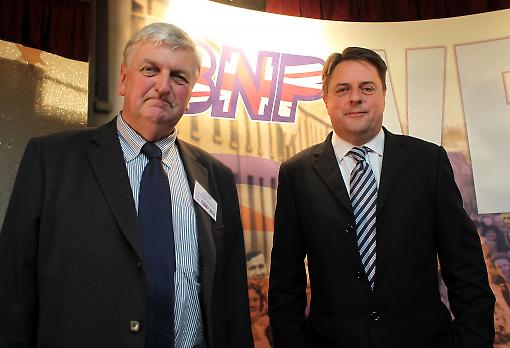 They hope the new British Democratic Party will kill off the BNP, while security for the launch meeting will be provided by EDL activists.

Andrew Brons, a former Chair of the National Front and until recently one of the British National Party’s MEPs, will launch a new far-right party this weekend – one he and his supporters hope will finally kill off the BNP.

The British Democratic Party (BDP) launches tomorrow in a village hall in Leicestershire, as the hardline alternative for disillusioned BNP members and supporters.

Security for the meeting is being provided by EDL activists, bussed into the area from as far as Newcastle, to provide protection from the possibility of attack – not from antifascists, but from the rival BNP who are meeting in nearby Leicester.

Ageing Brons, who is 66 this year, has positioned himself as the new party’s ideological mentor and president.

The interim chairman of the new party is former BNP organiser Kevin Scott from Newcastle. Scott has maintained a steady line of attack for nearly two years against what he and Brons’ supporters allege is the ongoing corruption and watering down of the BNP.

The new party comes eighteen months after Brons failed to unseat BNP leader and fellow MEP, Nick Griffin, in a bitter leadership election for control of the ailing party. Since the party’s disastrous showing in the 2010 General and Local elections, hundreds of disillusioned BNP members have made their way to smaller parties like the English Democrats. Thousands of others just quit the far-right altogether. Brons however, waited patiently, believing the perilous financial state of the party would eventually account for Nick Griffin.

Brons finally resigned from the BNP in October of last year, claiming that he had been “constructively expelled” by what he considered to be merely the “rump” of what was left of the BNP. Griffin loyalists had already launched a series of claims for unfair dismissal and religious and sexual discrimination against Brons’s European office in anticipation of his departure.

In over fifty years of far-right activity, Brons has maintained an impressive collection of hardline “admirers”. A speaking tour last year drew audiences from such groups as the National Front, British Movement and Combat 18. Many of those attendees were former BNP members who either left or were driven from the BNP during its drastic modernisation in the 2000’s. Brons did not join the BNP himself until 2005. He and Griffin had previously shared a passionate hatred of each other during their time together in the NF during the 1980’s.

Brons began his political career way back in the 1960s when he joined the openly Nazi National Socialist Movement, before going on to become Chairman of the National Front in 1980. Under Brons’s tutelage, the BDP is expected to re-focus efforts on promoting scientific racism, calling for the compulsory repatriation of non-whites and push heavily the notion that the Holocaust is a hoax – core policies that Nick Griffin tried to either disguise or extinguish entirely after taking over the BNP in 1999.

Others backing Brons include London-based Barrister Adrian Davies who registered the party and is a long-term opponent of Griffin. As well as registering the party and writing its constitution, Davies most recently defended (unsuccessfully) a businessman from Northern Ireland convicted and jailed for sending death threats to Griffin and his family.

John Bean, a former Mosleyite who previously edited the BNP’s monthly periodical and was often and openly lauded by Nick Griffin, has also now thrown his weight in with Brons, as has Dr James Lewthwaite, who split from the BNP to form his own, Bradford-based, National Democratic Party in 2010. Andrew Moffat who works for Brons in Brussels, and has previously worked closely with Holocaust Denier David Irving, will be the party’s Deputy Chairman.

Despite claiming it will be a democratic party, the new party has no plans to hold elections for posts. All positions in the party were decided weeks ago.

Nick Lowles of the antifascist campaign group Hope not Hate says the new party will be a serious challenge to Nick Griffin’s BNP. “The BDP brings together all of the hardcore Holocaust deniers and racists that have walked away from the BNP over the last two to three years, plus those previously, who could not stomach the party’s image changes.

“They and the BNP already have a mutual hatred of each other and neither party will stop until they’ve killed the other one off. The gloves will be off and it will be toxic”.

Shortly after nine o’clock this morning members of the British Democratic Party (BDP) arrived at  a small village hall in Leicestershire and began setting up for the party’s launch meeting.

Six miles away, in the car park of a Kentucky Fried Chicken restaurant, neo-Nazis and far-right activists from across the UK were arriving to be redirected to the secret venue. Despite the secrecy surrounding the meeting, members of the Hope Not Hate research team were able to infiltrate the redirection point and photograph a number of well known far-right activists, many of them disgruntled former BNP members.

Among those providing security for the redirection point was Gary Pudsey from Bridlington, in Yorkshire. A former BNP and C18 activist, Pudsey is one of a number of “former” extremists who made their way into the English Democrats when the BNP began imploding in 2010.

The village hall had about sixty far-right activists inside listening to a serious of speeches from people like Andrew Brons MEP and Kevin Scott on why they have quit the BNP. According to Lowles, there is great anger that the details of the meeting have been leaked by Hope Not Hate researchers. “A number of EDL activists [who were there to provide security for the meeting] are currently prowling the inside of the hall to look for hidden cameras, such is their paranoia.

“They’re not happy, obviously. But I think people have a right to know that these groups of people are lying and cheating their way onto public property to cultivate their message of hate. There should be no hiding place for hatred.”

Matthew Collins is a researcher for Hope Not Hate and author of “Hate: My Life in the British Far Right” (Biteback Books)

Hope Not Hate understand that after this article was published, Andrew Moffat refused to be confirmed as the BDP’s deputy chair. Moffat also disputes the fact that he held the position of political secretary to David Irving. The article has been updated to reflect the fact that he may never have been formally employed by Irving, but has worked closely with him in the past.