The Greediest Man in Hollywood

” … To some, redirection might be an appropriate metaphor for Anschutz’s entire enterprise, which they fear is all about bringing God and conservatism to Hollywood under a more secular and apolitical guise. … “ 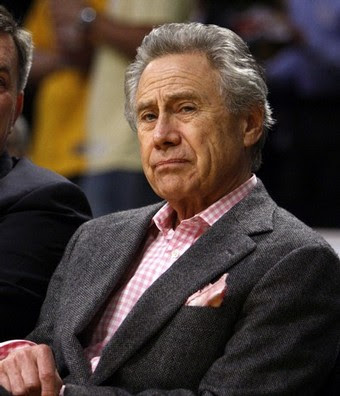 Consider the following scenario: It’s Saturday, and you feel like going to the movies. You see the latest installment of The Chronicles of Narnia advertised in your local Examiner newspaper, part of a chain whose name has been trademarked in more than seventy cities. You decide to go to your local theater — a Regal, Edwards, or United Artists. You sit through twenty minutes of advertising, followed by the film itself, which has been delivered from studio to theater by a fiber-optic line.

The underlying theme? Every stage of your moviegoing experience — from production to promotion to distribution to exhibition — was controlled by one man: sixty-six-year-old religious conservative Philip Anschutz.

Named Fortune’s “greediest executive” in 1999, the Denver resident is a generous supporter of anti-gay-rights legislation, intelligent design, the Bush administration and efforts to sanitize television. With a net worth of $5 billion, he is Forbes ‘ thirty-fourth richest American, two spots above Revlon’s Ronald Perelman. Anschutz heads a vast media empire whose assets include the Examiner chain, twenty percent of the country’s movie screens, and a sizeable stake in Qwest Communications, the scandal-ridden telecom giant he formerly directed. (Anschutz was accused of helping falsely inflate Qwest profit reports, then making millions by selling his own shares in the company — a claim he ultimately settled by paying millions to charity.)

Anschutz’s stake in Hollywood has been growing since 2000, when he began buying the bankrupt Regal, Edwards and United Artists chains and founded two film studios, Walden Media and Bristol Bay. In many areas of the country, the Regal Cinemas chain is the only option for seeing first-run films. Carole Handler, a prominent Los Angeles anti-trust attorney, says this gives Anschutz considerable leverage in his latest domain of conquest. “Anschutz is the person who went and bought the theaters out of bankruptcy,” she says. “Don’t think that passed unnoticed by the studios.”

Anschutz has gained considerable power in negotiating licensing agreements with the film studios, contracts which impact everything from where a movie is played, to how long it runs, how it’s marketed, which upcoming releases are given trailer time, and how revenue is split between the studio and the theater. It is a kind of power, says Handler, that harkens back to the early days of cinema, when studios, distributors, exhibitors and even movie star magazines were concentrated into the same relatively few hands.

There’s a twist, though: Anschutz’s politics. A heavy contributor to the Republican Party for decades, Anschutz helped fund Amendment 2, a ballot initiative to overturn a state law protecting gay rights, and helped stop another initiative promoting medical marijuana. More recently, he helped fund the Discovery Institute, a conservative Christian think tank that mounted a public relations campaign and financed “research” into intelligent design. He has also supported the Media Research Council, the group that generated nearly all the indecency complaints with the FCC in 2003.

Ironically, it was Hollywood that saved Anschutz. As a friend of his told Fortune, Anschutz “has a latent interest in doing something significant in American Christianity. He is working deliberately and diligently on it.”

Anschutz did not respond to my request for an interview, and he has given only a handful over the past few decades. This is not for lack of an opinion or a story to tell. A devout Presbyterian who grew up in Kansas, Anschutz is married with two daughters and a son. He inherited his father’s land investment and oil exploration business, but didn’t grow up wealthy; in fact, he gave up his plans to attend law school because the family business was failing.

Ironically, it was Hollywood that saved Anschutz. After discovering a major oil well in Wyoming, the well caught fire. Anschutz sought to hire Red Adair, the legendary oil well firefighter to put it out, but wasn’t able to pay Adair’s fee. Anschutz realized he could pay Adair — and make $100,000 on top of that — by selling the rights to the footage to Hollywood.

Having faced tough times before, Anschutz is probably not overly concerned about the fact that theater attendance was down six percent this year, even in an industry with thin profit margins. Earlier this month Regal reported a forty-three percent increase in fourth quarter profits, a windfall partly credited to another Anschutz venture, the holiday blockbuster and Christian allegory The Chronicles of Narnia: The Lion, the Witch and the Wardrobe. Narnia has grossed close to $300 million, a far cry from the first film Anschutz produced, 2002’s Joshua. A depiction of the Second Coming, Joshua pulled in less than $1.5 million for its studio, Epiphany Films, a specialty label of Anschutz’s proselytic-sounding Crusader Entertainment. While websites are usually maintained even for box office flops — 2003’s Gigli, for instance — Joshua‘s site has been taken down, and its URL redirects visitors to the studio’s new name, Bristol Bay.

To some, redirection might be an appropriate metaphor for Anschutz’s entire enterprise, which they fear is all about bringing God and conservatism to Hollywood under a more secular and apolitical guise. Or, as Joshua co-producer Bob Beltz told Christianity Today in 2002, “We wanted something that we thought would have more of a mainstream impact, that would expose unchurched people to the person of Christ in a way that they might walk out of the theater saying, ‘Is it possible that Jesus could really be that wonderful?'”

Some have speculated that Narnia might be what Anschutz’s friend meant by the “significant” contribution the media mogul wants to make: using his wealth to buy a place for evangelicals in Hollywood. The film’s distributor, Disney, initially wasn’t interested in Narnia. Gradually, Disney began to realize the Christian allegory’s potential appeal among evangelicals, who demonstrated their box-office clout with The Passion of the Christ.

Anschutz isn’t just blurring religious and secular lines with his film, but taking advantage of a softened divide between production and exhibition. In the early days of Hollywood, film studios dominated the exhibition business, obligating independent theater owners to accept bad films in exchange for the right to play good ones. In 1948, the federal government issued the Paramount Consent Decree, forcing the major studios to divest their theater holdings. Recent theater mergers, such as the consolidation of AMC and Loews (the number two and number three chains, respectively) must pass antitrust scrutiny. AMC/Loews, whose merger closed in January, was forced to sell off theaters in key markets such as Boston and San Francisco last year to avoid creating a monopoly.

“In the 1970s and 1980s, exhibition overbuilt [too many expensive theaters] in shopping centers. The centers declined in value while the rents did not,” says Handler. “Then in the 1990s most of the exhibition houses sought bankruptcy. Many emerged from bankruptcy under aegis not of common ownership but of common investment.”

Instead of buying United Artists, Edwards, and Regal Cinema outright, Anschutz avoided antitrust concerns by acquiring their debt, Handler explains. Regal already has a distribution monopoly in many areas of the country, and Anschutz’s power extends beyond Regal to joint ventures he has formed with his competitors. His partner, Oaktree Capital Management, is financing Sundance’s new art-house chain. Instead of selling off pieces of Regal Cinemas’ overbuilt empire, Anschutz launched The 2wenty, twenty minutes of pre-show advertising that launched with a free ad for the military, Enduring Freedom: The Opening Chapter. In 2004, Anschutz merged his pre-show advertising business with AMC’s and Cinemark’s. The result was National Cinemedia, a company that now runs its ads on more than half of the nation’s screens, and whose president is a former co-chairman of Regal Entertainment Group.

Some viewers have sued the theater chains that run the ads, alleging that delaying the start of movie trailers until twenty minutes past the posted show time constitutes false advertising. But the ads aren’t going away. Cinema advertising is an increasingly lucrative source of revenue, with sales up forty-eight percent in 2004. The theaters that haven’t succumbed to the trend Anschutz started are having trouble surviving, says Jason Thompson, director of Captive Motion Picture Audience of America, an organization that protests theater advertising.

Where advertising and programming were once left to theater managers, Anschutz now has centralized control of every Regal Theater through its proprietary Digital Content Network. Anschutz has also bought up television ad time and billboards for his “For a Better Life” campaign, which emphasizes values such as “faith” and “integrity,” sometimes promoting them with Disney characters such as Kermit the Frog and Shrek. While the campaign is not explicitly religious, it does offer unsolicited moral advice to movie patrons at Regal’s 6,000 screens. The ads were produced by Bonneville Communications, a Salt Lake City agency that produces ads for the Mormon Church.

In 2005, PG-rated films outperformed R-rated films in the theater for the first time in two decades. Conservatives have touted weak theater attendance as proof that the heartland isn’t interested in Hollywood’s licentiousness and liberal politics. The Dove Foundation, non-profit advocates of “wholesome family entertainment”, published a study showing that G-rated movies are eleven times more profitable than R-rated flicks. Indeed: as a co-producer and financial backer of Oscar contender Ray, Anschutz reportedly insisted on altering the details of subject Ray Charles’ life, downplaying his drug use and womanizing to obtain a PG-13 rating.

Although Hollywood didn’t heed the Dove Foundation’s advice in 2005 — the key Oscar nominations were all low-grossing films that are very political — studios have begun looking into releasing PG versions of their R-rated fare, an innovation made possible by the advent of digital cinema. The double release would allow theaters to play the cleaner version during more lucrative screening times earlier in the day, and the director’s cut later on.

What’s good for the theater lobby isn’t necessarily good for those of us who don’t want our entertainment censored. Yet there is no shortage of screenwriters willing to lend Hollywood’s product a cleaner sensibility. In December, the Atlantic Monthly reported on Christian screenwriting school Act One, whose faculty includes producers and writers from mainstream shows like Buffy the Vampire Slayer and That ’70s Show. In 2004, conservatives launched the Liberty Film Festival; last October the festival included a panel discussion titled, “Was Communism a Threat to Hollywood?”

Perhaps the more pressing question: is Hollywood ready to compensate exhibitors by eschewing edgy politics for movies with a built-in audience? A sequel — or, more accurately, prequel — to The Passion of the Christ is rumored. New Line Cinema is producing The Nativity, a film based on the life of Mary and Joseph, directed by Catherine Hardwicke (Thirteen, Lords of Dogtown). The End of the Spear tells the story of five missionaries whose families forgive the South American tribe that killed them.

Fears of a boycott of one of the year’s most eagerly anticipated releases, The Da Vinci Code, has Sony Pictures mounting a public relations campaign among evangelicals and Catholics. Madea’s Family Reunion, which recently opened at the top of the box office, is a comedy about an African-American Christian fundamentalist family, whose evangelical producer Tyler Perry has, according to the L.A. Times, helped sell studio heads on the African-American Christian film market. Besides working on the Narnia franchise, Anschutz’s Walden Media is releasing Amazing Grace, a biopic of the Christian revivalist Wilbur Wilberforce.

Anschutz may well see himself as someone like Wilberforce, the wealthy merchant’s son whose embrace of evangelical Christianity led him to fight to abolish the British slave trade. Wilberforce, however, was open about his intentions. Anschutz may better resemble another openly conservative Presbyterian, one who acquired his own vertically integrated empire of newspapers, film studios, and television stations years before anyone realized he would turn those media outlets into his personal political mouthpiece. That man was Rupert Murdoch.