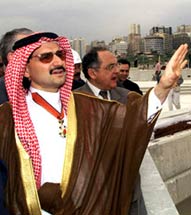 The second largest shareholder in News Corp. -- the parent company of Fox News -- has donated hundreds of thousands of dollars to causes linked to the imam planning to build a Muslim community center and mosque near Ground Zero in Manhattan, says a report from Yahoo!News.

According to the report from Yahoo!'s John Cook, Saudi Prince Al-Waleed bin Talal, who owns seven percent of News Corp., "has directly funded [Imam Feisal Abdul] Rauf's projects to the tune of more than $300,000."

Cook reports that Prince Al-Waleed's personal charity, the Kingdom Foundation, donated $305,000 to Muslim Leaders of Tomorrow, a project sponsored by two of Rauf's initiatives, the American Society for Muslim Advancement and the Cordoba Initiative, which is building the Manhattan mosque.

That Fox News' second-largest shareholder, after Rupert Murdoch, has financial links to the "Ground Zero mosque" will be seen as ironic by critics of the news network, who have watched with chagrin as the network's talking heads attempt to link the mosque to radical Islamism.

"Stewart didn't need to take all those steps to make the connection," Cook writes.

Cook also reports that Prince Al-Waleed has in the past funded a number of Islamic organizations that have been maligned by Fox News commentators:

Al-Waleed donated $500,000 to the Council on American-Islamic Relations — which has been repeatedly denounced on Fox News's air by Geller and others as a terror group — in 2002. Indeed, Rauf's "numerous ties to CAIR" alone have been cited by the mosque's opponents as a justification for imputing terrorist sympathies to him, yet few people seem to be asking whether Murdoch's extensive multi-billion business collaboration with the man who funds both Rauf and CAIR merits investigation or concern.

Other beneficiaries of Al-Waleed's largess include the Islamic Development Bank, a project designed to "foster the economic development and social progress of [Muslims] in accordance with the principles of Shari'ah." The IDB funds the construction of mosques around the world, and has been implicated by frequent Fox News guest Stephen Schwartz in an attempt to spread radical Wahhabism (a fundamentalist branch of Islam) throughout the United States.

Cook notes that it was none other than News Corp.'s New York Post that reported on Prince Al-Waleed's donation to Muslim Leaders of Tomorrow. He reports that Fox News had no comment for his article, and emails to the prince's Kingdom Foundation were not returned.

Hey Fox Fans, Your Favorite Network Is Part-Owned By a Saudi Prince Whose Family Rules By Sharia Law

This post first appeared on Hullabaloo. Printed from speakeasy: http://blogs.alternet.org/

Maybe Newtie could persuade Rupert Murdoch to have his partners build some synagogues and churches and end all this unpleasantness.

The stridency with which Fox News personalities attack the downtown Islamic center — red meat for the millions who tune in each night — is an example of the often uneasy relationship and occasionally diverging interests between many of News Corp.’s properties, in this case Fox News and its parent corporation.

For example, News Corp.’s second-largest shareholder, after the Murdoch family, is Prince Alwaleed bin Talal (pictured above ), the nephew of Saudi Arabian King Abdullah, and one of the world’s richest men. ...

Saudi Arabia, which is ruled by Alwaleed’s uncle King Abdullah, is, of course, an authoritarian petro-monarchy that actually is governed by Sharia law and is known as one of the top global sponsors of terrorism. A spokesperson for the Saudi embassy in Washington says that while Alwaleed is part of the royal family, he isn’t a member of the government, but rather a private citizen.

I doubt all those Fox news patriots know that the same News Corp that’s owned by a Wahhabist Saudi prince just donated a million dollars to the Republican party. Of course they’ll never find out because the only network they watch is the same terrorist funded network that’s doing it.

But if they were to hear about it, considering that they all seem to be so worried about the terrorists coming to kill them in their beds, I would imagine they’d be uncomfortable about getting all their news from a network that’s partially owned by one of “them.” And I’d be very surprised if they were sanguine about a scary Muslim donating to their patriotic political party. Why next thing you know they’ll be trying to build community centers near Ground Zero.

At the very least, this whole thing is very insensitive, don’t you think? After all, some people really hate Muslims and it’s very unpleasant for them to have to watch news networks that are owned by them and be asked vote for a Party that’s funded by them. I’m not saying that Murdoch should be forced to stop donating millions to Republicans or partnering with Saudi princes who believe in Sharia law. I just think it’s common sense that he wouldn’t do it in the first place.